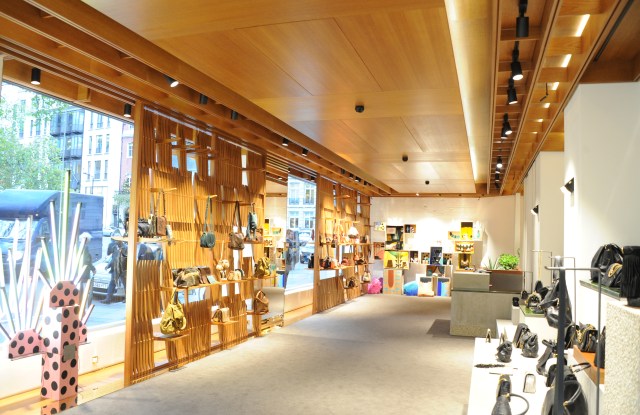 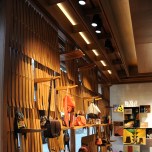 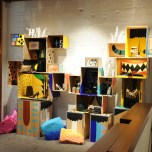 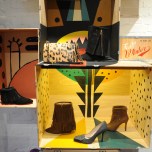 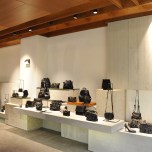 Housed in a former bank, the store stocks his full collection of bags and shoes, including two special editions to mark the opening, the Popeye, a little purse on a gold chain, and the Victor, a ring-bedecked bag with a Seventies feel.

“I want to make sure all the stores are different, and I put the carpet in because I thought, we are in England, and England is the best at carpets. You always see them in hotels and it’s very warm and English to me,” the designer told WWD.

The store, which spans 1,728 square feet, is rectangular in shape with a window that stretches 82 feet and faces the east side of Berkeley Square. Windows are fitted with slatted, moveable wood shutters that filter the light.

The interiors have been reconfigured to reflect the modernist spirit of Fifties and Eighties high-rise lobbies, and were inspired by the work of the Italian architect Carlo Scarpa. Bags sit on chunky concrete displays while pebbles and green plants soften the atmosphere – along with the gray-brown carpeting.

Dreyfuss, who works with an in-house artist, said the theme will change with the season, and already he’s already thinking of summer, which will have a music festival theme with blue, green and gray desert rocks.

The store is a few steps away from his wife Isabel Marant’s London flagship on Bruton Street, although Dreyfuss said it wasn’t a strategic move. “We never planned it that way, but we do live together, and when I like something she likes it, too, and vice-versa,” he said.

The brand has recently opened units in Manhattan’s SoHo; Seoul; Tokyo; Taipei; and Paris, which opened a month ago. London is the designer’s eighth store.

Dreyfuss said he wants to have a breather – and then “go stronger in the American market, especially on the West Coast,” where he plans to open a shop.