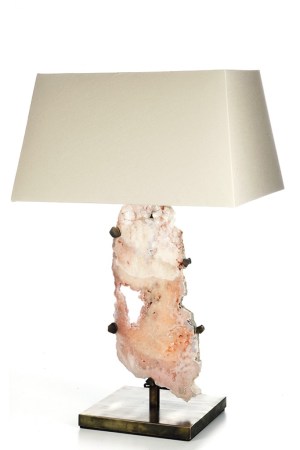 As a fine jewelry designer, Kimberly McDonald has a healthy obsession with rocks.

Before launching her line in 2006, she cultivated her eye as a curator for private estate collectors, but her fascination with geodes and agate — her specialty — can be traced to a far less glamorous place: her stepfather’s driveway in Wisconsin. “In the Great Lakes, a huge percentage of gravel was agate,” said McDonald, who is based in New York. “It was like a hunt, so as a kid I would eat raspberries off the bush and pick agate out of the driveway.”

Now McDonald is expanding with a full home collection of pillows, scarves, agate-based lamps, Lucite boxes, paper weights and napkin rings that is launching for September. Bergdorf’s has picked up the line, and Forty Five Ten and Jamie in Nashville have committed to shop-in-shops. Retail prices range from $155 for acrylic cube paperweights with embedded geodes, to $1,950 for large wood trays with geode handles, to $7,500 for bespoke agate-based lamps. The vintage silver collection is more pricey: $650 for nut dishes to $15,000 for larger, one-of-a-kind pieces.

McDonald has plans to open a private salon for her jewelry and home collections in Los Angeles this fall. “With the jewelry, since everything is made and designed by hand, there aren’t a lot of repeatable things,” said McDonald, who sources stones from Mexico, where much of her production is also based. “It struck me that there would always be a limitation to what we could do — which is a good thing. We explored other options of how to parlay that bespoke, organic but very fine design into other areas of lifestyle, so it was a natural transition to put those pieces into these trays and boxes.”