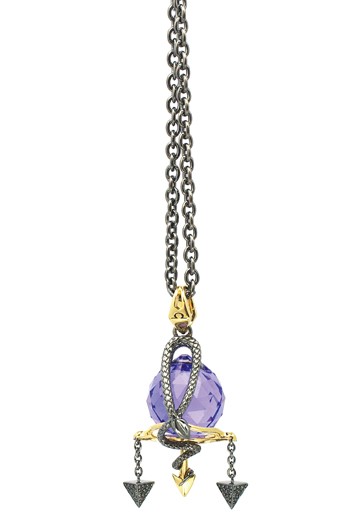 Creativity up, prices down seems to be the mantra in Basel this season.

Coming off of a buoyant holiday, retailers said they plan to approach Baselworld with an open mind and healthier budgets, focused on innovative midrange jewelry.

Looking to the year ahead, the mood among jewelry brands remains mixed, with strategies ranging from treading water until the market picks up to the re-assessment of markets or an increased focus on e-commerce activity, according to executives. Several brands confirmed they are responding to robust demand for lower-priced jewelry lines.

Stephen Webster said launching his silver-based Superstud line three years ago has proven to be a lifeline.

“Over that period when there was a lot of uncertainty, it gave us something. It’s become hugely important for us,” he said, adding that since entering Harrods in London this month, the line has sold out.

The trick, according to the designer, is to maintain creativity whatever the material.

“Our silver pieces have big volume. They make a statement,” said Webster, who listed among the year’s main challenges the reboosting of those markets hardest hit by the crisis, such as the Middle East, where he had to put retail development on hold. One strategy for strengthening ties with Japan over the past six months, he said, has been to shrink pieces from the collection to make much smaller versions that are also lower priced, specifically for that market.

Launches by Webster at Baselworld will include In Deep, a spin-off of the brand’s aquatic-themed Jules Verne line, which also trawls the seabed for inspiration. Key pieces include spider crab-shaped earrings, rings and cuffs, with spindly legs and beady black opal eyes, as well as cascade jellyfish-shaped earrings and rings. Webster will also present his limited edition Astro Ball Collection Crystallized-Swarovski Elements pendants, based on the 12 zodiac signs. In keeping with a spiritual bent, guests to the stand will be treated to “mystic tea leaf readings” by Webster.

Having introduced more affordable price points last year, the heart of David Yurman’s latest offer falls in the $2,000 to 3,000 price bracket. It’s one of the best-selling categories for the brand, along with below-$1,000 giftables and wedding jewelry.

For the first quarter, David Yurman is experiencing strong double-digit revenues, according to Carol Pennelli, the company’s senior vice president of marketing and sales, who noted that now more than ever the customer is looking for price-value justification. To that end, the company continues to focus on bold weighty pieces with significant value, she said, citing among new additions bold cuffs and long linear draping chains. Like many, the brand senses a return to yellow gold for the holiday season, so it plans to roll out yellow gold pieces with colored stones and diamonds in the second half of the year.

Rosana Otani-Warner, international sales director of Brazilian jewelry brand Carla Amorim, which operates six stores in Brazil, said the brand has adjusted its offer to cater to growing demand from North American retailers for midrange jewelry pieces. These are priced on average from $3,000 to $5,000. Now, around 80 percent of the brand’s collection reflects that positioning, up from around 50 percent last season.

Among Carla Amorim’s launches is its Brasília line, inspired by buildings and gardens designed by local architect hero Oscar Niemeyer. One ring, for instance, which exists in 18-karat rose, white and black gold versions with 4.66 carats of diamonds, has a design that evokes the Nation’s Pantheon in Brazil’s capital, Brasília.

Predicting another year of “transition” for the industry, Fawaz Gruosi, chief executive officer of Geneva-based jeweler de Grisogono, said he has streamlined his jewelry collections for Baselworld.

“Retailers are not really in a good mood,” Gruosi said. “They’ve closed their budgets, so there’s no point in putting out huge quantities of lines that will further confuse them.”

Introductions will include sculptural pink gold and diamond pieces with curved lines.

Marie Helene Morrow, owner of San Juan, Puerto Rico-based Reinhold, which sells independent jeweler creations, as well as brands such as David Yurman, Robert Lee Morris and John Hardy, said customers are buying more accessible pieces. However, she said they are also collecting more of them, often splashing out the equivalent, financially, to one expensive piece. With accessible jewelry so readily available across the market, from beauty parlors to fast-fashion giants, the key is to select ultracreative products with an edge, she said.

“I’m very careful where I go with it,” said Morrow, who noted that porcelain is one of the hottest jewelry materials of the moment.

Following a buoyant holiday season, Morrow said at Baselworld she will be scouting for lines that “hit you right between the eyes.”

Citing “very strong” jewelry sales was Jean-Christophe Bédos, president and ceo of Boucheron, who added at Baselworld the brand will focus on jewelry watches. He also noted a continually increasing demand for gold, diamonds and precious stones. Jewelry is outperforming watches, said Bédos, adding that demand for high jewelry special orders has seen particular growth within the house, especially since the financial crisis.

“Boucheron plans to continue to offer product personalization through its e-business Web site and bricks-and-mortar boutiques,” he added.