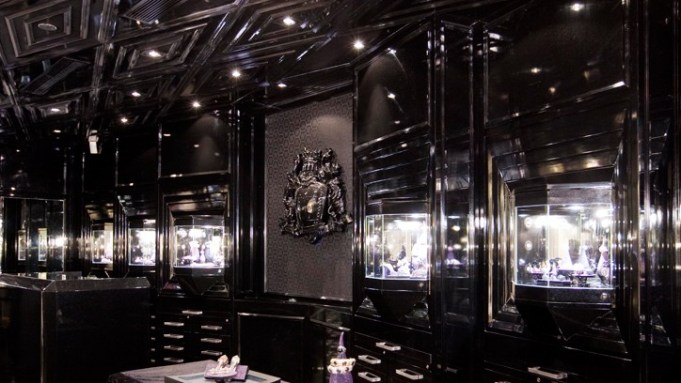 HONG KONG — MCL by Matthew Campbell Laurenza jewelry, featured on popular TV shows such as “Gossip Girl” and “The Hills,” has opened its first stand-alone store at the prestigious Landmark shopping center here.

The brand, with retail neighbors that include Diane von Furstenberg, Balenciaga, Dior and Harvey Nichols, was lured by the growth potential of the Asian market.

The boutique, which spans 358 square feet, incorporates traditional interior elements and modern materials. The style is inspired by a blend of classic eras with carved ceilings and ornate moldings. But it is also sensitive to green consumer sensibilities. In fact, the store is portable. Using fiberglass and reinforced resin modules, the shop is built out of panels that are connected with a Lego-like snap-in or snap-out process, allowing the store to be entirely movable from one location to the next using the same set of panels.

In addition to the TV exposure, MCL’s designs have been worn by celebrities, including Rihanna and Carrie Underwood.

Since launching in 1998, Matthew Campbell Laurenza primarily worked with gold and diamonds for private clients that commissioned one-off pieces. However, in 2007, he decided to enter the retail market by using less precious materials such as silver and colored sapphires with enamel. The demand for his new looks has earned Laurenza prime spots in Bergdorf Goodman, Neiman Marcus and Harrods, where a gemstone cuff will retail from $1,300.

Laurenza said his sales have been unaffected by the financial climate and U.S. volume has climbed 18 percent this year. He traces this to affordable pricing and a lack of competition for his maximalist aesthetics.

He was drawn to open in Asia first because of consumer spending habits in the region. Laurenza also has found that Asian consumers have a need to see entire collections before making a purchase decision.

“Americans and Europeans don’t mind going into a department store and choosing from an edited selection made by buyers,” he said. “But Asians are so used to going into a store and having entire collections available to see or order that it made sense to really crack the market here with a stand-alone [store].”

A line of handbags with three ranges — fabric with leather trim; jeweled clutches with fabric, silver and enamel, and resin bags with jewels — is in production. The handbag collection will launch next year.

MCL opened a store in Singapore at the new luxury shopping mall ION Orchard in November to cater for the growing number of Middle Eastern tourists, and next year plans to open shops in Paris and Miami.