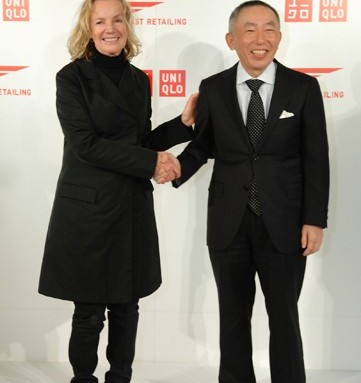 TOKYO – Jil Sander is making her long-awaited comeback – but in a fast-fashion way.

The German designer has just signed a “design consulting agreement” to oversee the men’s and women’s apparel at Japanese retail giant Uniqlo. Sander and executives from Uniqlo’s parent company Fast Retailing Co. Ltd., held a press conference here Tuesday to outline the terms of the deal.

“Some of you [have known] me since I have been engaged in fashion but I’m not interested in the past. Let us talk today about the future” the designer, clad in a black knee-length coat, told journalists assembled at the Four Seasons Hotel. “I’m here in Tokyo for something completely different. The challenge for me is to establish a premium quality in a democratically-priced range.”

Although Sander will not receive an official title at the company, the designer will take over the creative reins for all the retailer’s products excluding accessories and children’s wear. The Japanese brand and Sander are also working to develop a special Uniqlo collection, bearing the designer’s minimalist look, set to bow for the fall season. Details regarding the collection have not yet been disclosed.

As reported in WWD last week, Sander was spotted at the Première Vision textile trade show in Paris in February, which reignited ongoing speculation she planned to return to the fashion world. Sander famously left her namesake label for the second time in 2004 after clashing with the brand’s former owner, Prada Group, and its chief executive officer, Patrizio Bertelli, over creative and control issues.

In a coincidental twist of fate, her old fashion house ended up in Japanese hands when Onward Holdings Co. Ltd. bought it last September from Change Capital Partners for 167 million euros, or $244 million. Change Capital had acquired the brand from Prada in February 2006 for about 100 million euros, or $146 million. Raf Simons, the brand’s current creative director, had been put in place by Prada the previous year.

While Uniqlo has collaborated with a number of designers such as Phillip Lim, Alexander Wang and Alice Roi through its Designers Invitation Project, this is the first time the company has established a continuous relationship with a marquee name. The company’s design team has lived a relatively anonymous existence churning out colorful basics. Like Sander, Uniqlo has always put a strong emphasis on fabric innovation in its products, such as machine-washable sweaters that keep their shape and hooded sweatshirts that retain heat.

Uniqlo is one of the few retailers succeeding in recessionary Japan. The brand’s affordable line up of fashion basics has propelled months of same-store sales growth and earned chairman Tadashi Yanai the honor of Japan’s richest man, according to Forbes magazine, with a fortune estimated at $6.1 billion.

Uniqlo said earlier this month that February’s same-store sales were up 4.2 percent, advancing for the fourth consecutive month. However, the February figures represented a slowdown from the double-digit sales growth the retailer saw at the end of 2008. The retailer has been experimenting with formats in recent months, recently opening its first concept store targeting young female shoppers in their late teens and early 20s. It also has opened a concept store in Selfridges in London.

While at a fast-fashion price point, Uniqlo’s aesthetic mirrors Sander’s signature minimalism. Talk of when the designer would return to fashion began almost the moment she left Prada five years ago — with the rumor mill speculating she was consulting to Gap in Europe, looking to introduce a home furnishings collection, or simply leading a quiet life in her native Hamburg and working on her garden. Her return to her signature label for the second time in May 2003 was filled with hope that she and Bertelli could find common ground. “We’re taking the patience and the time to learn about each other,” she said at the time. “We are two strong characters and two entrepreneurs and different cultures.”

But a year later, Sander exited again. Now the designer, 65, is back in fashion in a segment of the market that is increasingly linking with major designers. H&M has teamed up with a string of well-known fashion names, including Karl Lagerfeld, Stella McCartney, Viktor & Rolf, Roberto Cavalli and, most recently, Rei Kawakubo of Comme des Garçons.