The company's Beverly Hills boutique on Rodeo Drive has been expanded and is now the label’s largest in the U.S. 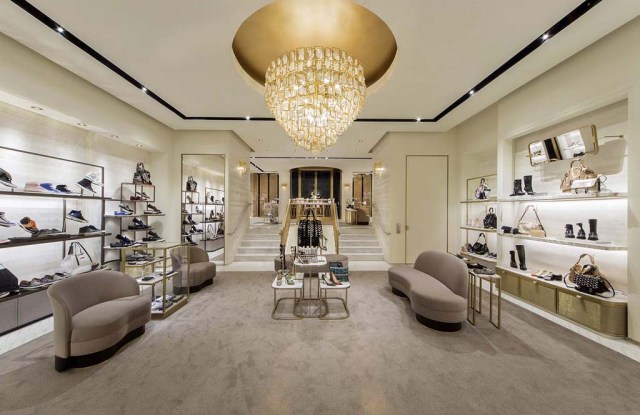 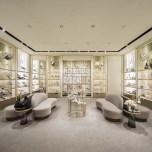 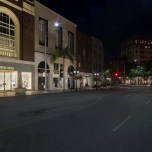 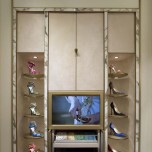 LONDON — Jimmy Choo has chosen its Beverly Hills boutique on Rodeo Drive — a store that reflects its history as a go-to for footwear on the red carpet — as the location to introduce a new retail design concept, created by David Collins Studio.

The store has been expanded and is now the label’s largest in the U.S. It has been designed to feel like a “fantasy closet,” the label’s creative director Sandra Choi said, with details such as pale chevron-patterned floors, satin gold and rose marble fittings and mink velvet soft furnishings, which contrast with woven mesh design details found in cabinets and drawers.

“We wanted a feeling of being at home in an exciting place,” said Pierre Denis, chief executive officer at Jimmy Choo, noting the late Collins’ reputation for creating the interiors of buzzy restaurants and bars, such as The Wolseley and Claridge’s Bar in London. “The richness of the concept is its contrasting materials…a shoe shop is also a place of service, a place of discovery, and that’s what we tried to [create].”

The new store design will be gradually rolled out across a number of the label’s existing boutiques, including the Bond Street store in London, which will reopen in September. Choo will mark the Beverly Hills opening, and the launch of its new Choo.08 collection of flats, sneakers and boots, with a party at a private Hollywood Hills residence Tuesday night, at which the British band Bastille will perform and Solange Knowles will DJ.

The Beverly Hills boutique will mark the debut of Jimmy Choo’s Made to Order service. Customers can choose designs from a selection of four of Jimmy Choo’s shoe families, in a variety of heel heights and a swathe of materials, and have their initials gold-stamped on the shoes’ soles. The new collection will sit alongside ranges including Jimmy Choo’s 24:7 line of its core shoes and accessories and Choo.08. “We have a lot of different collections, from 24:7 to the rock edginess of Choo.08, [and] we felt there was a need to [add] something more intimate in the relation with our clients, and Made to Order is that,” Denis said.

Prices for the Made to Order collection will start at $750 for the Anouk shoe in suede. While the Beverly Hills store will have a permanent Made to Order area, the service will travel to different stores as a trunk show.

The Beverly Hills store will also carry Jimmy Choo’s full men’s and women’s collections of shoes and accessories, the first Jimmy Choo store in the U.S. — and outside Asia — to do so. Denis said he believes men and women like to shop within the same boutique, and that the label’s men’s business is growing as “guys are spending much more time on fashion, from clothes to shoes — they are paying attention to their look,” he said. To underline the growing importance of the firm’s men’s business, Denis pointed to the launch of a men’s fragrance, Jimmy Choo Man, set to bow in September with actor Kit Harington as the fragrance’s face.

This year the label will open new North American stores in Waikiki, Hawaii — its second store in the state — and its first store in Canada, in Toronto’s Yorkdale Shopping Centre, in a newly created luxury wing there. In addition, Choo will reopen an expanded Highland Park store in Dallas in the new design concept as a men’s and women’s store in May, while the Las Vegas store in The Forum Shops will reopen in August, also as a men’s and women’s store in the new store concept. Denis noted that the U.S. is Jimmy Choo’s largest market, and that while the company doesn’t disclose sales figures, he said that the firm has seen its third year of “double-digit growth,” noting that growth both in Asia and in the label’s “core countries” had contributed to the rise in sales.

As to the reported talks of an initial public offering for the company, Denis said that the firm, which is owned by luxury goods group Labelux, “is at the point where there is a clear development, and like any companies, when you have a strong development, you want to know how you are going to finance your development,” he said. “So we are studying several options, but nothing has been decided at this point in time.”