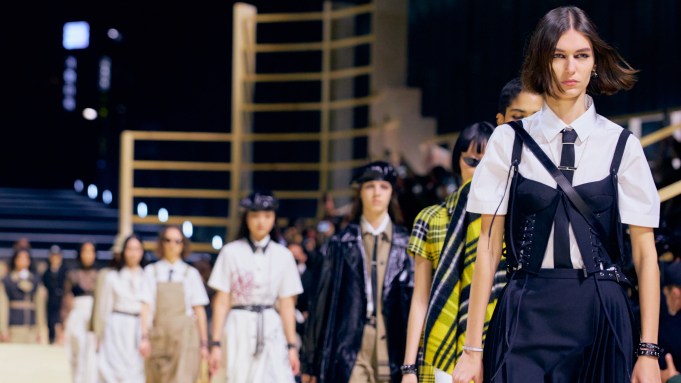 SEOUL — On a slightly overcast but otherwise balmy Saturday evening here, K-pop stars and fashion enthusiasts filled the rows of an outdoor runway in the courtyard of Ewha Womans University as Dior presented its fall 2022 collection at the brand’s very first global fashion show in South Korea.

Along the front row, Dior global ambassador Jisoo, a member of the K-pop phenomenon Blackpink, wore the brand’s black lace gown. Nearby were fellow ambassadors including former pro-figure skater and Olympic gold medalist Yuna Kim, and singer and actress Suzy Bae — the latter in a corseted, dissected trench by Dior.

Actor and singer Sehun, actress Minha Kim from “Pachinko,” artist Oh You Kyeong, and Korean-American model Irene Kim were among the other Korean influencers and celebrities at the event.

In theme with the collection’s message of sisterhood and women’s empowerment, a team of female skateboarders opened the show — gliding in and out between the smooth wooden ramps interwoven throughout the runway and seating area — all constructed from plywood. Among them was teenage pro skateboarder Minji Kwak and pro-skater Siye Ha — two rising faces on South Korea’s skate scene.

Amid leopard-print skirts, menswear-inspired biker shorts and tartan kilts, Dior also showcased a series of lace and tartan gowns that were specifically tailored to be longer for the collection’s Korea launch.

The evening was not only the fashion house’s first fashion show in South Korea, but also its first major event in Seoul since the nation reopened its borders to fully vaccinated travelers and tourists in early April, after remaining largely shut for nearly two years.

Prior to the event, at Dior’s Seongsu concept store, which opened the following day on Sunday, the fashion house’s artistic director of womenswear Maria Grazia Chiuri shared her thoughts on the latest show; her impressions of South Korea and K-pop culture, as a designer and mother, and spoke about the brand’s partnership with Ewha Womans University.

Dressed in a black coat and sporting her signature black eyeliner, Chiuri said the collection takes inspiration from Christian Dior’s family motto “strength through unity.” She chose to explore this through everyday and subversive aspects of uniform culture, a concept she finds especially relevant in the context of South Korea. “I like school uniforms very much, and especially the way in which students in Korea update the concept of uniform, often [adding in] punk elements,” said Chiuri.

“The uniform makes us part of a group by eliminating differences and hierarchies,” she said, explaining that the collection was designed to express participation, communion and sharing — especially between women.

South Korean culture, given its contrasts and complexities, is a fascinating example of today’s modernity, said Chiuri. “It is dramatic, it is ironic and poetic. It’s amazing how [South Korean culture] managed to conquer the world with its films, TV series and music,” she explained. “It is a [culture] that defines today and indicates new trajectories [forward].”

Asked what it was like to collaborate with K-pop star Jisoo, who became the brand’s global beauty and fashion ambassador in 2021, Chiuri said she learned about the South Korean musical genre through her own family.

“I am fortunate to have my daughter, who works with me and who challenges me about what to hear and see,” said Chiuri. “She talked to me about the K-pop phenomenon, and I started listening to Blackpink, [who] impressed me very much.

“[Jisoo] is an extraordinary ambassador of Dior fashion because she embodies an idea of positive feminine energy,” she added.

Such energy is another reason why Dior is in Seoul. The fashion house recently unveiled its partnership with Ewha Womans University. Helmed by Chiuri, the brand’s corporate social responsibility program will offer scholarships, internships and management training to students of the school, along with conducting master classes and talks hosted by Dior.

“I believe in the importance and value of study and education. So when I heard about Ewha Womans University and its history — a modern school for women — I thought it would be the right place to present the collection and reaffirm my ongoing commitment to the empowerment of women through education,” said the designer.

“We are a global brand so I think we are responsible to support empowerment and the education of women,” she said, citing that “the future of a country is built through educating the new generations.”

“I have watched my own children gain awareness and grow through their university studies. I’ve given lectures at a number of universities and always found it incredibly rewarding to engage with the students,” she said. “The university is a place for collective growth.”

With its first show in the nation, as well as the sprawling new concept store and partnership with one of South Korea’s premier schools for women, Dior’s stakes in South Korea are growing — and with good reason.

Unfazed by the impact of the pandemic, the brand’s South Korean operations have seen a surge in sales over the past year. In 2021, the brand saw 328.5 billion won, or $259 million, in sales in the country and reported a net income of 77.7 billion won, or $61 million, according to figures filed with Korea’s Financial Supervisory Service. The fashion house’s operating profits rose 2.4 times to 104.7 billion won, or $93.6 million, last year, the filing showed.

Beyond hosting several exhibitions in South Korea over the years including Esprit Dior, the LVMH Moët Hennessy Louis Vuitton-owned fashion house operates 12 women’s shops in South Korea, including a four-story flagship in Gangnam, which opened in 2015.

“Given the huge success of Dior in Korea, we have several projects aimed to increase our square meters imprints in all main Korean locations,” Pietro Beccari, chairman and chief executive officer of Christian Dior Couture, told WWD on Friday.

For Chiuri, the fall 2022 fashion show in Seoul represents a partial return to normal life. “The pandemic has changed many of our priorities, as well as the value we place on certain things, but it hasn’t altered the desire to dress,” she said of post-pandemic fashion.

“Now that we are returning to a life in public, we are rediscovering how to share [again]” through sartorial and personal expression, she explained.

The brand is showcasing its fall 2022 collection, along with the Dior Chez Moi loungewear capsule, Dior Book Totes and sneakers, at its new pop-up Dior Seongsu, located in a formerly industrial, up-and-coming part of Seoul. Inspired by the design of the fashion house’s new Avenue Montaigne flagship in Paris, Dior Seongsu is a 7,500-square-foot open-air structure that also features a café and will remain in place for several years, as the brand continues to hone its focus on the Korean market.

“Seoul is an extraordinary, dynamic and contemporary city. I have just arrived and I hope to have the time to rediscover it now,” said Chiuri. “I must say that I feel a great energy in this post-pandemic moment.”

With contributions from WWD Korea Editor YoungHwan An.
Newsletters