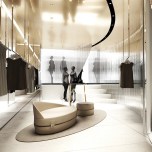 A successful Dallas-based technology entrepreneur has linked with French leather company Jitrois and plans to open a New York boutique in mid- to late February.

“I love the brand, and how many opportunities are there to represent a luxury brand and bring it to the U.S.?” said Jodi Shelton, licensee for the forthcoming Jitrois shop at 959 Madison Avenue. “I’ve always wanted a footprint in New York.”

Known for sexy, detailed leather clothing and outerwear, Jitrois has seven stores in Europe and Asia and one in Aspen, Colo., and plans for a unit in Shanghai, explained Yann Patry, marketing director. The privately held Paris company is managed by designer Jean-Claude Jitrois and chairman and chief executive officer Gilbert Maria.

“New York is the greatest entry point for the whole American market [for] a French brand,” Patry said. “On a bigger level, New York is coming back to be ‘la favorite’ of the luxury and fashion industry, and the city feels like it’s booming, big time.”

Last summer, Jitrois found an “ideal” spot on Madison among other luxury brands — Christian Louboutin is two doors down and expanding — and near its customers, Patry noted. The company tested the market by introducing the collection at private events.

“The response was great,” Patry said. “Clients are enthusiastic and pressing for a proper Jitrois presence and experience in the city.”

Designed in a similar style as other Jitrois stores, the futuristic boutique will feature a curved, lit wall of vertical acrylic tubes facing a mirrored wall that reflects the pale-gold ceiling and white floor. It has 700 square feet of selling space, plus a basement of equal size for offices and storage. Construction is set to begin in January and expected to last five to seven weeks.

Shelton, who founded and manages the Global Semiconductor Alliance as well as the Shelton Group, which specializes in investor relations for tech companies, said she didn’t own a thread of Jitrois when, out of the blue, she and a friend met the founders in Paris.

Always looking for new opportunities, she hit it off with Jitrois and Maria, and three Jitrois styles now hang in her wardrobe, which otherwise is heavy on Balenciaga, Jean Paul Gaultier, Jason Wu and Phillip Lim.

“We built our partnership together fairly quickly as Jitrois and Jodi are very complementary,” Patry said. “What we appreciate about Jodi is [her knowledge of] how to operate a start-up and how to grow a business. The future with Jitrois and Jodi will be bigger than NYC, and in the short to midterm we have plans for Miami [and] Las Vegas, to name a few.”

Jitrois hasn’t had much of a retail presence in the U.S. since the Eighties, when it had a few stores, he added.

While Shelton plans to participate in the buying, she has hired Lewaa Abdul Khalek, a former partner in the Jillian Lewis collection and sales director at Searle, to manage the store.

“This is not only an investment,” she said. “It gets some of my mind share, too, because I love fashion.”

Shelton is not concerned by her lack of experience in retail.