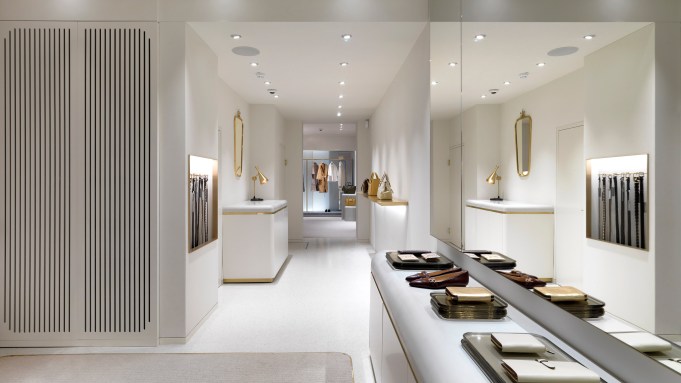 “We are overwhelmed to be returning to the place where it all began for us decades ago,” said John Davidson, who founded the brand in 1985 with his wife Monique. “Many don’t realize we actually used to create pieces in Mayfair above the Medici Gallery in the Eighties. We fell in love with this building as soon as we saw it — its charm seemed to mirror what we try to create in our pieces, so it’s a natural home for us to be.”

The couple were inspired by Edwardian themes and the works of John Singer Sargent for the store, which sits over two floors and across 850 square feet. Bouquets of light pink roses are dotted throughout the pale-carpeted space, the focus of which is an impressive, cantilevered staircase with treads cast in solid terrazzo marble and a leather-wrapped handrail that leads to the basement floor.

The Davidsons worked with Universal Design Studio, a London-based architecture and interior design practice, on the fit-out, and tapped Nicholas Chandor to source bespoke pieces of furniture. Handbags, accessories, ready-to-wear collections, shoes and small leather goods are all stocked, and there are some exclusive Mount Street product offerings.

At the store’s party to mark its opening, Daisy Lowe and Harriet Verney took turns on the DJ decks, while guests including Zara Martin, Zafar Rushdie, Jasmine Hemsley and Bip Ling had wallets monogrammed in gilded letters.

This is the brand’s third stand-alone store, with a headquarters-cum-shop on Golborne Road in Notting Hill and a flagship in Aoyama, Japan, where J&M Davidson has its strongest following. The new store coincides with a new direction for the label — but don’t call it a relaunch.

“I wouldn’t say we are relaunching the brand, more refreshing it,” explained John Davidson. “While we are a timeless brand, we know it’s key to innovate, especially at a time when markets are so dominated by technology and influencer marketing. [The year] 2015 saw us celebrate our 30th year in business, so it seemed a really natural time to reassess and to start to spend more time and focus back in the U.K., following lots of international work, particularly in Japan.”

This reinvigoration is owed to an investment from Yagi Tsusho, a Japanese marketing and merchandising company that imports and exports fashion and accessories, as well as food, fabrics and yarns. For a decade, the Davidsons have worked with the company, which was originally the sole importer and distributor of J&M Davidson in Japan and made a considerable contribution to the brand’s growth in the Japanese market at the Aoyama flagship and the department store concession business.

When John and Monique Davidson met on a Spanish beach in 1969, John was working as a photographer in Brighton and Monique had been a designer in Paris. Their brand was born when Monique picked up a studded dog collar in a market and remarked that it would look good as a belt. They tracked down the factory and started making belts in bridle leather. Handbags and wallets followed, and rtw was launched in 1994.

After 40 years of marriage, they still work together every day and show no signs of slowing down. Quite the opposite — they have their sights set on further flagship openings across the globe. “Our ambition, like any passionate designer, is to launch more stand-alone stores,” said John Davidson. “Given Monique’s background, launching in Paris would feel a natural lead-on. We’ve also had really positive feedback from the States and Hong Kong, so watch this space.”