At 2,745 square feet, the flagship offers Gilles Mendel the opportunity to show off the evolution of the brand. 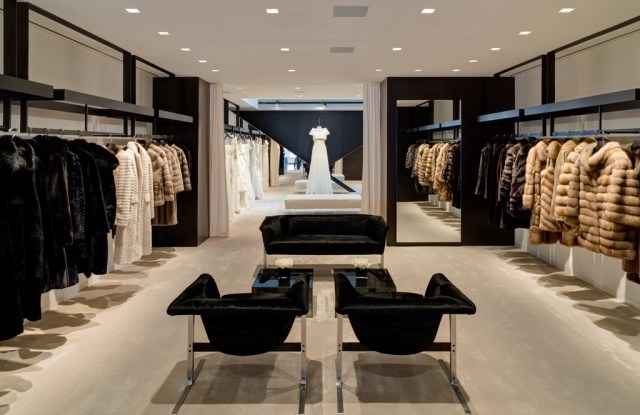 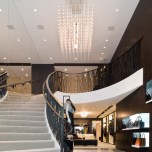 “It’s a small geographic move but a pretty big one for the company,” Mendel said, in a sitting area on the main floor of the two-story space. “We come from a store that I built 18 years ago on Madison Avenue, which was really my little jewel box, the beginning of J. Mendel in the USA. It’s where I started to do my ready-to-wear in a very small way. We didn’t even have conceived fitting rooms. I was selling evening gowns and women would undress in the mezzanine.”

Thankfully there is no need for that in the new space. There are three fitting rooms. At 2,745 square feet, the new boutique is more than twice the size of the previous one, and offers Mendel the opportunity to show off the evolution of the brand, which has its origins in fine furs.

“We have the complete brand offering,” he said. “We went from fur to rtw, which we had in the old store, but now we’re offering accessories, including handbags, and have a special space for bridal.”

Working with David Mann of MR Architecture, the space has a residential feel from the series of smaller rooms dedicated to rtw, eveningwear, furs and bridal to the grand staircase and the mosaic floor that greet shoppers. There is also a graphic handbag wall.

Marc Durie, president and chief executive officer, declined to disclose projections for the store. “Since we invested in this new concept, we obviously have plans to expand,” Durie said. “We are looking into different opportunities on an international basis, but it’s still very much in its initial stage.”

The company expects sales to increase by 30 percent from the previous unit. According to company executives, J. Mendel’s annual sales volume is $35 million, with fur still accounting for just over 50 percent of the business. “We are aiming to show a progress and a change in the balance of the business,” Mendel said.

To mark the opening, Mendel is offering an exclusive Madison Moonlight Persian lamb minaudière bag. There are just 18 of the $3,200 bags — 18 being a nod to the number of years he spent in the first space.