They had been principals in Adele Simpson Inc.

Joan Simpson Raines and her husband, Richard Raines, principals in her late mother’s fashion company Adele Simpson Inc., have both died of COVID-19.

Simpson Raines, 81, died May 17 and Raines, 88, died April 5. They both had been hospitalized at New York-Presbyterian/ Weil Cornell Medical Center.

Simpson Raines was born and raised in Manhattan. She attended the Lenox School and graduated from Bennett College before joining her mother’s fashion business, which was founded in 1949.

Raines was born in Philadelphia, graduated from Milford Academy and the Wharton School at the University of Pennsylvania and took his first job in textiles.

The two met on a blind date, started working together at Adele Simpson and married on May 14, 1961. Simpson Raines worked in design, while Raines focused on textiles and operations. They were with the company for 30 years before taking over the business upon Adele Simpson’s retirement in 1984. Simpson died in 1995 at the age of 91.

Simpson Raines confessed to having only one of her mother’s twin  talents in a WWD story in 1984. “In this business, people are usually good at one or the other, but my mother was a very astute businesswoman besides having a creative mind,” she said. Simpson Raines was more of a creative type.

In 1990, Simpson Raines and Raines launched a second label called Joan Raines, which went after a younger customer. That line included cocktail and evening dresses and was designed by Anthony Muto. “This line will allow us to do business with stores or departments that don’t ordinarily buy the Simpson line,” Raines told WWD. 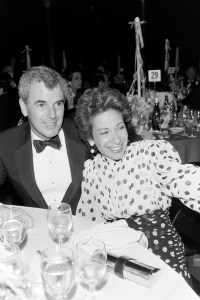 Roger Raines, one of their sons, told WWD, “My mom was very much her mother’s daughter. She had a real spark and was always entertaining.” When told that one observer said his father was very handsome, Roger Raines remarked, “It worked to his advantage. When buyers from the Midwest and Southern stores would come into the showroom, they would say, ‘You know who we’d really like to talk to?’ And dad would close the deal.”

Roger Raines added that his father was a boxing fanatic and loved the history of and watching the sport. “But my mother couldn’t stand it,” he said.

In 1991, Adele Simpson and Baron Peters Inc. merged to form ASBP, with headquarters in Lowell, Mass. The Rainses and Peters owned equal shares of the new company. At the time, Simpson Raines said Albert Capraro, who had designed Adele Simpson, resigned and would not be replaced. (The line would later be designed by herself and Muto.)

The following year, Simpson Raines and Raines resigned as principals of ASBP Inc. and its Adele Simpson Inc. business. Muto continued to design the Adele Simpson collection. The Joan Raines label reverted back to the couple. Barron Peters later filed for bankruptcy.

In 1991, Simpson Raines had a short stint at Judith Lieber as executive director, overseeing all business aspects of the handbags and accessories company. 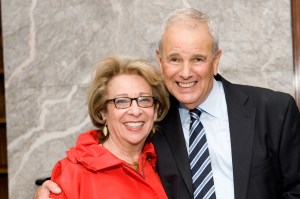 In addition to Roger Raines and his wife Victoria, the couple is survived by another son, Robert, and his wife, Kerry, and two grandchildren, Alex and Annie.

A memorial service will be determined at a later date.