By Miles Socha and Katya Foreman on July 1, 2016
View Slideshow 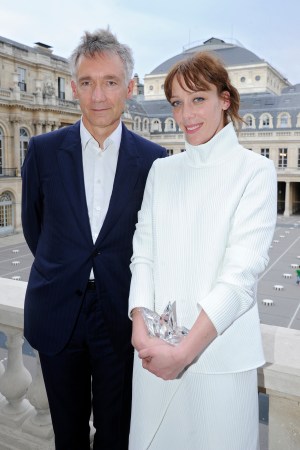 “I had absolutely no idea waking up this morning that it was going to be one of the most important days of my life,” Wanda Nylon’s Johanna Senyk said Friday night after being handed the 2016 ANDAM prize at a ceremony here on the eve of couture week in Paris.

The prize comes with an endowment of 250,000 euros, or $278,740 at current exchange, plus two years of mentoring from Geoffroy de la Bourdonnaye, president and chief executive officer of Chloé.

The other contenders for the honor, now in its 27th edition, were Aalto, Tim Coppens, Jacquemus, Koché and OAMC.

Senyk launched Wanda Nylon as a rainwear brand and has since expanded it into a full ready-to-wear line that’s still built on synthetic and protective fabrics. French mail-order giant La Redoute recently tapped her for a capsule collection.

The designer, who works out of a studio located next door to where she lives in Paris’s hip 10th arrondissement, said just being nominated for the prize had given her a huge creative boost and a stronger sense of freedom. “It has had an impact on the way I work. I’m someone who tends to knuckle down and ignore what’s going on elsewhere, I try to protect myself. I really get into the new silhouettes I’m developing or the various projects I’m working on, trying to make sure things remain as coherent and as accessible as possible. I’m totally hands-on,” she said.

Senyk described the Wanda Nylon set-up as “a young team made up of friends, some of whom I’ve known since childhood,” adding “even members of the family muck in and my business partner, Guillaume Befve, has become my life partner. There’s something quite magical about the way we all work together. It’s a relationship based on talent and affection.”

When asked about what areas she feels she needs to develop with her ANDAM mentor, Senyk, who is working on her third collection, replied: “I think [de la Bourdonnaye] will be the one putting his finger on what we need to do and applying his expertise to our particular set-up. I have an extremely creative take on things, I’m quite free in the way I go about creating and in the way I react to things and make decisions. I can only imagine that somebody who is capable of managing a House like Chloé will bring a pragmatic approach based on the real facts, which we have no clue about. It will only make us stronger.”

De la Bourdonnaye said jurors were bowled over by Senyk’s “joyful” and attention-getting designs. He said he would put Chloé’s executive leaders, including previous ANDAM laureate Tom Van Lingen, at Senyk’s disposal. “We’ll be helping her on all aspects: sourcing, distribution, communication, financing, human resources, you name it,” he said.

Francesca Bellettini, ceo of Saint Laurent, lauded Senyk’s enthusiastic and convincing presentation. “You could see all the passion she was putting behind the collection,” she said.

“What I like about Johanna is that she doesn’t care, she’s not afraid about being over-provocative, those pieces are strong,” said actress Aymeline Valade, who just wrapped filming the next Luc Besson movie “Valérian,” which stars Cara Delevingne.

Out on the terrace enjoyîng a glass of Champagne before the results were revealed, Caroline de Maigret was among those rooting for Wanda Nylon. “I haven’t seen a young designer like that for a long time, a label that’s so creative with fabrics but at the same time is very commercial,” she said.

Atlein was launched this year by Antonin Tron, a graduate of The Royal Academy of Fine Arts in Antwerp who has been working in Balenciaga’s studio under the house’s last three designers. Tron specializes in sensual, mix-and-match jersey pieces partly inspired by his surfer lifestyle and the landscape of France’s Atlantic coast.

The Accessories Design Prize, worth 40,000 euros, or $44,600, went to Tomasini Paris. The other nominees were Hugo Matha and Amélie Pichard.

“It’s quite easy to do an ‘It’ bag, something visual and strong once, but it’s much more difficult to develop a full range of products and create a whole universe only with accessories. And he has that potential,” Longchamp creative director Sophie Delafontaine said of Emanuel Tomasini, whom she is to mentor.

Also at the event, ANDAM president Pierre Bergé decorated Dufour as a Chevalier in France’s merit system, the Legion of Honor.

ANDAM is financially supported by 15 private and institutional partners. The grand prize is open to designers of any nationality willing to establish a business in France. The French acronym for the National Association for the Development of the Fashion Arts, ANDAM was founded in 1989 by Nathalie Dufour, with the support of the French government and with Pierre Bergé as president. ANDAM has been a springboard for an array of designers who would go on to achieve international recognition, including Martin Margiela, Viktor & Rolf, Christophe Lemaire and Jeremy Scott.

Pigalle Paris was the 2015 ANDAM victor and Stéphane Ashpool, the label’s designer, received creative and strategic advice from Bruno Pavlovsky, president of Chanel fashion, the 2015 mentor.