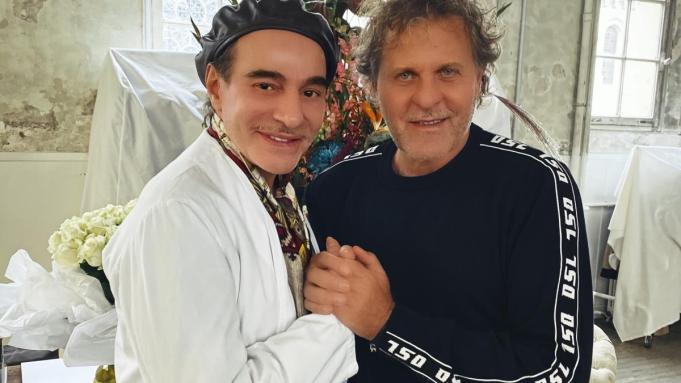 Since John Galliano joined Maison Margiela as creative director in 2014, revenues at the Paris-based house have doubled — and it’s become a byword for cool handbags and accessories.

The development, confirmed first to WWD, should squelch persistent speculation that the designer could leave or be poached, and suggests that Rosso’s bold casting is starting to pay off.

The length and terms of the new pact were not disclosed, but it is understood to span several years.

“I believed John was the only person who could take this house five years ago, and I am even more convinced of this today,” Rosso said in a statement. “John’s undisputed talent is only matched by his understanding of today’s generations, their way of thinking, their struggles, their dreams. And he is doing exactly what this maison always did at its best — disrupt, innovate and inspire.”

For his part, Galliano said: “I am super excited for this new chapter and grateful to Renzo for his belief in me and the vision for Maison Margiela.”

The maverick British designer has dubbed Maison Margiela “the coolest cutting-edge couture house,” and used the haute platform to explore gender fluidity, high-tech fabrications that interact with smartphones and experiments in garment reconfiguration.

Accessories now account for 60 percent of the business because of a series of hit handbags, including one that resembles a cloud, and sneakers in particular.

At Margiela, the couture serves as the top of a creative pyramid “which infuses all ready-to-wear and accessories lines. John Galliano has managed to create a new, relevant and coordinated image and offer for the house that is successfully catering to the market,” the maison said in a statement.

One of fashion’s most flamboyant and controversial figures, Galliano surprised the fashion world when it was revealed he would take over the creative direction of Margiela, founded in 1989 by an intensely secretive, labcoat-wearing Belgian designer.

The appointment in 2014 telegraphed Rosso’s daring approach to the fashion business and raised questions about how one of the industry’s great romantics might interpret a house built on avant-garde ideas like deconstruction.

Galliano had been sitting on fashion’s sidelines after being ousted from Christian Dior and his signature fashion house in 2011 following racist and anti-Semitic outbursts that precipitated one of the most spectacular flameouts in recent fashion history.

Prized for his ultrafeminine, historically inspired designs, and a particular penchant for bias-cut gowns, Galliano was seen as a surprising choice for a house known for cleft-toed boots, deconstructed fashions and all-white stores.

Yet critical and commercial acclaim for Maison Margiela has widened in recent seasons, prompting speculation Galliano could be poached, or decamp to a larger house.

According to sources, the designer reconciled with LVMH Moët Hennessy Louis Vuitton last year, and some executives there had floated him as a potential candidate to succeed Karl Lagerfeld at Fendi, for example.

The founding designer remains as celebrated as he is elusive: He is the subject of a new documentary by Reiner Holzemer, “Martin Margiela: In His Own Words,” slated to premiere Nov. 8 at the Doc NYC film festival.