John Galliano: The Man and the Myths

A look behind the scenes as John Galliano prepares for his brilliantly subversive Paris men's wear show. 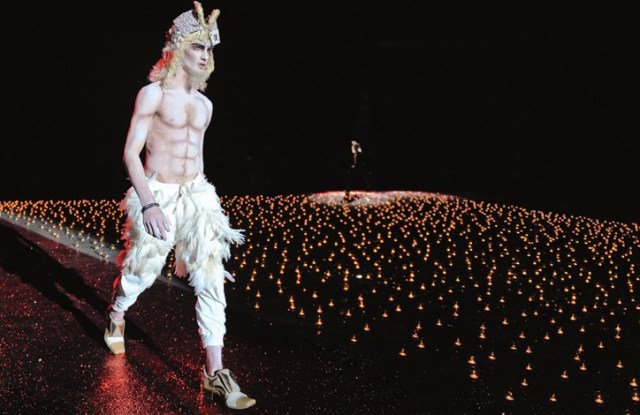 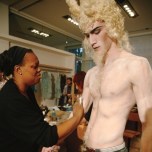 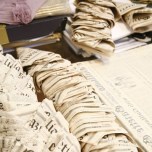 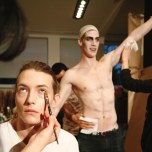 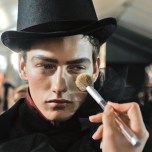 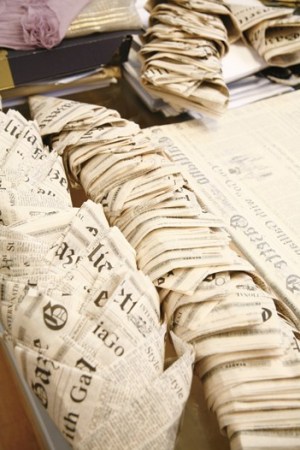 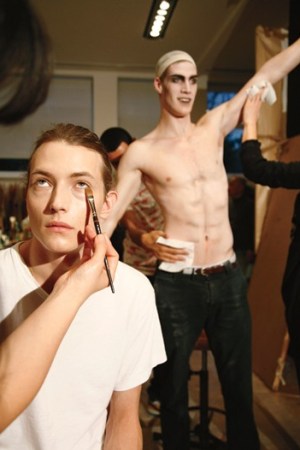 John Galliano has such an expansive imagination that this season it required a warehouse larger than a football field—dotted with 18,000 votives in red glass jars and 10,000 twinkling crystal shards—to accommodate it. As he gathered inspiration for his latest collection, Galliano’s mind stretched across several centuries, taking in everything from the mythical figure Pan to kinky 18th-century English barristers, who were rumored to wear frilly women’s lingerie under their imposing robes.

So it should come as no surprise that the scene at Galliano’s headquarters the day before the show was an eye-popping one, with makeup wizard Pat McGrath powdering bare torsos to create halfman, half-goat creatures; hairstylist Julien d’Ys sculpting wigs with built-in horns and spray-painting hair, and milliner Stephen Jones crouched on the floor fluffing the animal-esque feathered pants one of them would wear.

“I don’t find men’s wear restrictive at all,” the designer deadpans as he fires up a Marlboro, takes a sip of lemon-spiked water and cracks open an inspiration book that’s as educational and culturally literate as it is beautiful.

Galliano’s passion is plain and infectious as he describes the allure of a sloping, banana-shaped coat lapel—a key detail in his fall-winter tailoring that was inspired by the military attire of Mr. Andrews in the famous 1750 painting by Thomas Gainsborough—and the waistcoats worn by high-society gentlemen in 18th-century London. The designer lauds the “nonchalance” of Andrews’ comportment, which he spun forward into the present day by injecting the attitude of Babyshambles front man Pete Doherty. He beckons a model dressed in show look No. 1 to demonstrate the attitude: his tricorn hat pushed back on his head, the cuffs of his boots turned down, his swagger oozing cooler-than-thou attitude and confidence. The model totes a musket, barrel turned toward the floor, as casually as if it were a guitar or a skateboard.

The drawings of English gentlemen, with their studied ensembles and pigeon chests, inspired Galliano to do some trompe l’oeil coats and jackets with built-in vests.

“We call it pre-layering….You know I’m really into waistcoats,” he says with a big smile, patting the one hugging his gym-toned torso.

More than just a dream maker and showman, Galliano is also a superb technician, given the dozen years as a couturier for Christian Dior (and briefl y Givenchy) under his belt. Many of the Polaroids for the run of show, with all looks shot on model-musician Scott Barnhill, depict outfits done in muslin, the fabric couturiers use to craft their silhouettes. With a finger, Galliano traces out the key shapes: the soft shoulders, the rounded “hammer” sleeves, the barrel-like parkas.

Galliano’s subversive side, along with his vast knowledge of fashion culture, comes out in the details: his cockade prints and a signature toile de Jouy with a naughty streak, depicting half-pinup, half-skeleton creatures amidst Galliano’s coat of arms. “You have to look really carefully because it’s really subtle,” he teased. The prints were rendered into oversize streetwear shapes, like bomber jackets, sweatshirts and peacoats, in which the designer can envision cool guys “tearing around Paris.”

The show also referenced the mythical “bals des victimes,” cathartic parties said to have happened after the death of Robespierre at which relatives of those guillotined during the French Revolution acted out the executions in scanty attire, the back of their heads shaved and hair swept to one side, mocking their necks’ readiness for the blade. “I wanted to return to a sense of romance,” Galliano says, sprouting a grin and adding, “and with a debauched undercurrent.

Galliano launched his signature men’s wear in 2003, but had showed a knack for it early in his career, when London retailer Browns snapped up his 1984 graduation collection, titled Les Incroyables, and it sold up a storm. “I did men’s wear when I first started, and I sort of put it on the back burner,” Galliano says.

It is surely at full boil now.

The designer set an enthralling template for his epic men’s shows, in which a disparate cast of five male archetypes, from medicine men and surfer dudes to chimney sweeps and Casanovas, morphs from one  style to the next in ingenious ways, building creative tension and providing the visual thrills so rare in men’s wear. This season, Galliano ended his character studies with an ode to Beau Brummel, who “was the first to wear black and make black fashionable,” says the designer. Several days later, he took his bow after a triumphant Dior couture collection, inspired by Dutch masters, in one of those Brummel looks, a giant black tulle bow at his neck, a top hat over his bejeweled waistcoat and sheer shirt.

In today’s tough economic climate, Galliano says, creativity must be forceful and a brand’s message clear. “No middle roads,” he declares, clenching his fi st over his chest. “In a hurricane, you have to stand very firmly on your feet.”

To be sure, Galliano’s no-holds-barred approach to men’s wear is not for the faint of heart, but its strong identity has helped the collection quickly muscle its way into the marketplace. Galliano chief executive officer Pierre Denis, who joined the firm from Dior last October, says men’s wear already accounts for half of the Galliano business, and the fall-winter collection was a “huge hit” with buyers. “The show pieces and avant-garde items usually have sold out before they hit the store, and this season has proved no exception,” Denis says.

At present, Galliano men’s wear is sold to 110 wholesale clients worldwide, and Denis forecasts growth this year despite the tough business climate. He notes the collection has a strong presence in Europe and the Middle East, with America and Asia the next development priorities. Already in the works is a line of shoes and accessories, and Denis says a signature scent for men is also landing soon on planet Galliano.

“Just as he changed women’s wear, he has caused his own style revolution in men’s wear,” Denis asserts. “John is fearless, creative and innovative. He has really woken men’s wear up and made it exciting. Men’s wear is experiencing a real growth, it has real energy, and I do think Galliano deserves to take a large piece of credit for this shift. He is the most creative and determined man I have ever met.”

For the designer, creating strong shows with breathtaking visual impact is not a deliberate provocation, but simply the only way he knows how to approach fashion. “I’m a very much alive person,” he says, flashing a big smile. “I love the joy of dressing.”