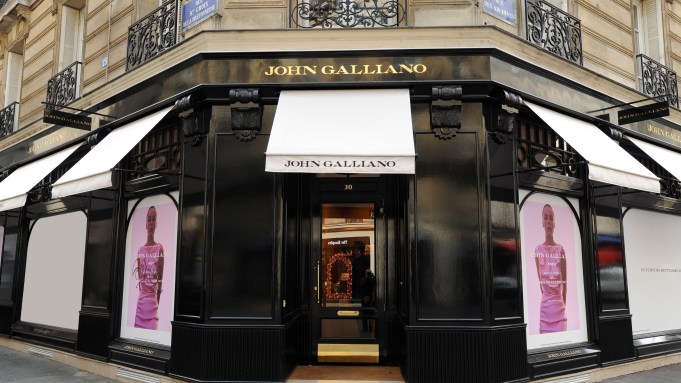 PARIS — John Galliano is setting up shop in the Marais district here.

The French fashion house will open on Friday a new flagship in the heart of an area that is being reshaped by the renovation of the BHV Marais department store, the arrival of luxury men’s stores and the impending opening of Fondation Galeries Lafayette and food shopping destination Eataly in the next two years.

Located on the corner of Rue des Archives and Rue Sainte-Croix-de-la-Bretonnerie, the 1,300-square-foot boutique blends French and British inspirations. It combines a black, neo-Victorian facade with transom windows and white awnings, designed to evoke a traditional shop or club in London, with an apartmentlike interior.

The opening marks the launch of Galliano’s new retail concept, developed by the house with Franklin Azzi Architecture — whose client roster includes Isabel Marant, Jérôme Dreyfuss and Christophe Lemaire — and Atelier Franck Durand, which designed the brand’s fresh logo and visual identity unveiled a year ago.

“All the British aspects executed with Parisian savoir faire reflect the brand’s signature spirit, yet the overall statement is sophisticated without being too serious in a way that may surprise some people. My hope is that they feel this when they enter, and that they soon enough feel at home,” he added.

The store will offer the brand’s premium contemporary lines for women, men and children alongside a selection of evening gowns and exclusive accessories, including a new handbag line, shoes, jewelry, lingerie and eyewear. The store also carries hats designed by Stephen Jones and Essence of John Galliano candles by Diptyque.

The brand’s store on Rue Saint-Honoré, which has been refreshed to reflect its new codes, will offer mainly the higher-priced show collection, with a focus on occasion wear.

Dominique de Longevialle, managing director of John Galliano, said the Marais store was designed to show potential partners the new direction of the house after a period marked by the founding designer’s departure amid controversy in March 2011 and the financial troubles that subsequently beset its former Italian manufacturer Ittierre. Although Christian Dior SA has maintained its majority stake in the Galliano label, the business has struggled.

“This is the future of the brand,” de Longevialle said. “There is a whole portion of the world where we no longer sell wholesale, and I would say it’s the portion that holds the greatest growth potential in terms of business, so if you don’t show those people the premise of a concept or a path, they don’t do anything. This is the blueprint.”

Likewise, he hopes the handbag line — designed in-house and made in France — will spawn a new partnership for the category, which he would like to represent up to 30 percent of the brand’s turnover eventually. There are two pillars on offer, including one featuring an oversize safety-pin detail.

De Longevialle said the store represented an investment of between 650,000 euros and 700,000 euros, or $726,335 and $782,200 at current exchange rates, but declined to disclose additional figures for the business. “We don’t have a huge distribution right now, but we are working hard to get there,” he said.

The executive, who joined Galliano from Christian Dior in 2012, said the Marais location was designed to attract a young clientele made up of local residents and tourists. The boutique is designed to be inviting, with white concrete floors in the main areas and plush carpeting in the changing rooms — amber for women and teal for men. Sections can be closed off thanks to pleated canvas sliding screens, and the more spacious of the women’s changing rooms is equipped with a triptych mirror.

The space is dotted with original foundation pillars and features vintage accents such as enamel jade tiling, brass sconces and a low table in fossilized wood. Clothes hang on sleek black rails and the window displays, which stretch more than 70 feet, will feature clothes on suspended dressmaker forms.

De Longevialle said the benefits of the location trumped any associations with the past — it is only a couple of streets from the bar where Galliano’s anti-Semitic altercation with fellow patrons that led to his dismissal at Dior was recorded on video camera. “My role is to find the most efficient location. I hope the history will be forgotten one day,” he said.

“What happened in 2011 is sad, and it would have been better if it hadn’t happened. Having said that, the brand has to have a life of its own,” he added. “We are starting with a clean slate, but based on a number of elements that are part of the brand’s DNA. We don’t feel like we are betraying anything.”