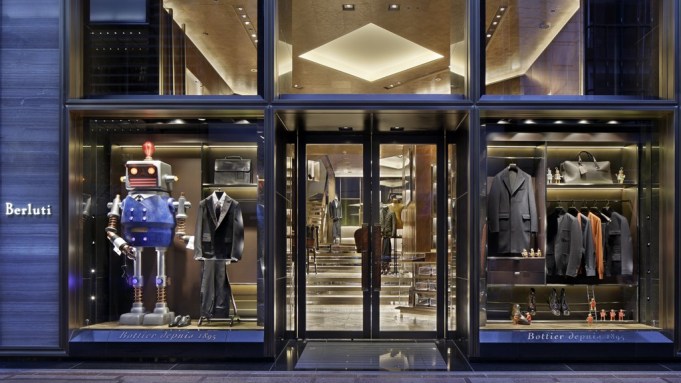 TOKYO— Men on a quest for luxury footwear have three new spots to shop in this city.

John Lobb, Church’s and Berluti are all opening new stores in Tokyo within a few weeks of each other, signaling a strong interest in the Japanese consumer and his penchant for pricey footwear. Just last week, Christian Louboutin unveiled a flagship here with an emphasis on men’s items, providing further evidence that labels are taking this segment of the market very seriously.

After a few tough years riding out Japan’s economic downturn, the country’s designer men’s footwear market is picking up again, said Yukino Kawabata, a research associate at the Tokyo office of Euromonitor International. Japan’s men’s designer footwear market is seen growing 2.4 percent this year to come in at 58.9 billion yen, or $573 million, according to Euromonitor. That represents a slowdown from the 4.7 percent growth posted in 2012, but that was coming off a low comparative base.

“Japan’s high-end footwear market still presents valuable opportunities for foreign brands due to the fashion consciousness of consumers, the sheer size of the premium market, as well as the overall stability of the retail landscape,” she said.

Renaud Paul-Dauphin, chief executive officer of British shoe brand John Lobb, said Japan is a very important market for the brand. Although he declined to give numbers, he said that the brand’s sales have doubled in Japan over the past five or six years and account for about one-fifth of John Lobb’s global sales.

“It’s a very mature market; it’s a market that is very strong,” he said. “In fact, nowadays, Tokyo is becoming one of the main, if not the most important city for John Lobb worldwide.”

The new, 1,066-square-foot John Lobb store opened on December 6 in the upscale retail, office and residential complex of Tokyo Midtown, which is also home to the Ritz Carlton hotel and is located in the neighborhood of Roppongi.

Tomooki Matsuda, president of John Lobb Japan, said the location is strategic because it will attract a different type of customer than the brand’s other store in the city, which is located near Ginza in the Marunouchi district.

“We had been looking for a second store in Tokyo for some time, and there were candidates in areas such as Aoyama, but I think for men’s Roppongi will continue to be a good location for a long time,” Matsuda said. “A lot of people come from many places to Marunouchi, but Roppongi is more exclusive. We’ll be focusing mostly on locals who live in the [surrounding] area and offering them our unique services.”

John Lobb currently has 19 points of sale in Japan, and the new Tokyo store is its fifth freestanding store in the country. The company is also planning to launch an e-commerce site for Japan next year

Berluti’s chief executive Antoine Arnault and artistic director Alessandro Sartori hosted a party here Tuesday night to fete the brand’s new 4,306-square-foot flagship in Ginza. The store, which opened Nov. 13, provides ample space to showcase the brand’s ongoing transformation from a Parisian cobbler into a men’s lifestyle brand encompassing a world of bespoke footwear and tailored clothing to sportswear and leather goods. The top floor features a work area where artisans can polish shoes to customers’ desired hue and patina.

On Tuesday, Berluti simultaneously celebrated the opening of its shop in Dover Street Market, which sells a range of exclusive items developed for the retailer.

Sartori said he watches Japanese men very carefully, along with the English, French and Italians, when it comes to style. “[The] Japanese are different, a world apart, super stylish, very eclectic with a personal point of view…I love Japanese style,” he said.

The designer recalled attending a dinner in Tokyo last year with 40 of Berluti’s customers and he was struck by all of the beautiful watches, handmade shirts and Neopolitan shouldered jackets he saw. “I’ve never seen so many elegant men all together,” he said. “They know how to style.”

The Ginza store, which replaces a smaller Berluti store in the same neighborhood, rounds out Berluti’s network of 9 stores in Japan. Over the past year, the LVMH Moet Hennessy Louis Vuitton-owned label has renovated and expanded its other two flagships in Aoyama and Osaka’s Umeda Hankyu department store.

Church’s is also tapping into the market by opening its first freestanding store in Japan on Saturday. The 1,023-square-foot flagship makes its home on the main drag of Omotesando and marks the launch of the English shoe brand’s direct business in Japan. Until now, its presence in the country has been limited to the wholesale business. Prada SpA bought Church’s in 1999.

Davide Sesia, president and representative director of Prada Japan, said the Japanese market is “mature and stable” and the company plans to build up Church’s direct business here, although he declined to elaborate further on a retail expansion plan.

Obviously, luxury shoe brands are targeting other fast-growing Asian markets as well.  On Dec. 18, John Lobb will celebrate the opening of the brand’s new flagship at Shanghai’s Plaza 66 mall, its second store in China. Meanwhile, Berluti recently opened new stores in Hong Kong and Taipei and relocated its space in Singapore.