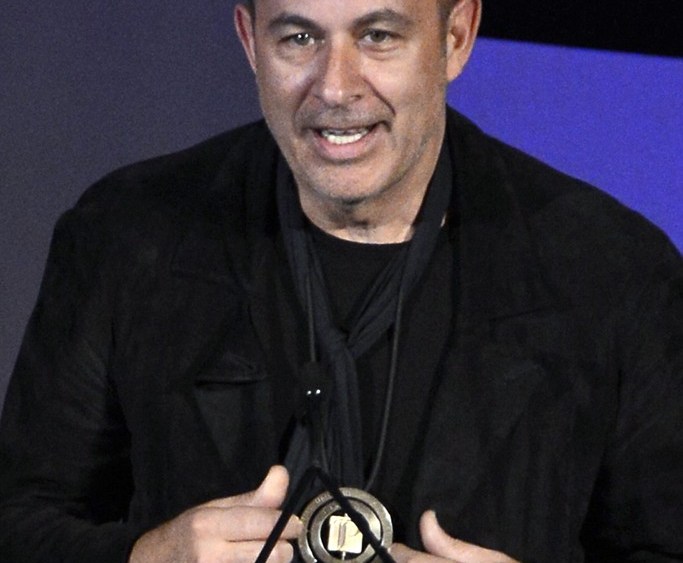 First given to Geoffrey Beene in 2002, the award is presented to designers who have made outstanding contributions to the fashion and design industry. Previous winners include Tommy Hilfiger, Calvin Klein’s Francisco Costa, Mary McFadden and “Project Runway” season one winner Jay McCarroll.

Allen Sirkin, president and chief operating officer of PVH Corp. and a 1964 graduate of Philadelphia University, opened the affair by presenting the award to Varvatos, calling him an icon who “mixes the flair of Motown music with the edginess of an urban environment for his award-winning men’s wear collections.” The 2,300 design students and other guests in attendance were shown a gritty black-and-white video montage of Varvatos’ runway reels, clips and ads, with imagery of music icons ranging from LL Cool J to Iggy Pop flashing throughout the flick.

Varvatos bounded up on the stage to accept the award and immediately infused some raucousness into the usually staid academy. “I want all the students to stand up and rock this place like it’s never been rocked before,” he belted out. “Forget about me. This night is about you guys.”

After the thunderous applause ceased, Varvatos spoke of his appreciation for receiving the award, and then moved onto words of inspiration for the burgeoning designers. “What I love about this evening is that it’s about innovation,” he said. “We’re in an industry that’s a cross between innovation and copycats, and there are a lot of people who just do versions of versions of versions. But everybody here today needs to think about being an innovator, not a follower. You don’t want to be a wannabe. You want to be an about-to-be. You want to be a leader,” he implored them.

In line with the innovation theme, earlier in the night Varvatos confirmed that he has plans with his new partner, Lion Capital, to expand his global retail presence, as well as enter the women’s wear sector. “We’re not sure when, how or where,” he said, “but it’s definitely on our docket.”

In keeping with the decidedly rock ’n’ roll vibe of the night, the fashion show portion of Evening of Innovation followed Varvatos’ appearance. Student designs ranged from Gustav Klimt-inspired futuristic separates to a black-and-white tulle tiered gown provoked by the idea of the Victorian era with armadillo influences, which won Best of Show.