The designer was in the Chinese capital for the unveiling of a Loewe pop-up shop and installation. 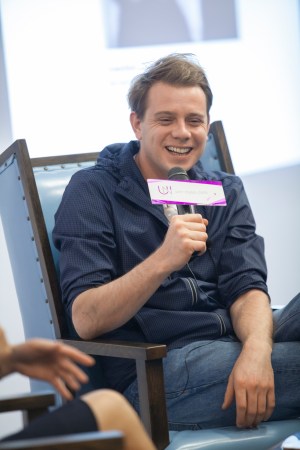 BEIJING — “I’m surprised I got here in one piece,” designer Jonathan Anderson told a crowd of students at Tsinghua University on Friday.

Looking tired from a Loewe party he hosted the night before at M Woods Museum, Anderson spent part of the night as a DJ, spinning Top 40 tunes at the private gallery located inside the city’s 798 art district with Hong Kong actor Edison Chen dancing by his side. On Friday, the  designer spent the day chatting with university students alongside Vogue China editor in chief Angelica Cheung, who moderated the talk. Anderson discussed his first impressions of the Chinese capital and what it’s like to be a young designer juggling two brands in tandem — as creative director of Loewe and his own label, J.W. Anderson.

This is his first trip to China and he spent the past two days getting to know the city and his clients better. He spent Wednesday night dining at the home of installation artist Lin Tian Miao, hosted the party the next day and after the speech on Friday, inaugurated Loewe’s new pop-up store and an exhibition of the brand’s spring 2016 collection at luxury mall Shin Kong Place with VIP clients. The exhibit will run until Wednesday. Loewe currently has 16 stores in Mainland China.

“It’s very fun, a great, fun city,” Anderson, 30, said of Beijing. “I’ve never been here and I’ve never experienced a city so vast. The traffic is incredible. I feel people probably just work in their cars, trying to get to work.”

Anderson has worn many hats during his young career — from starting out as an aspiring actor to working the “front lines” of retail at department stores and the window displays for Prada while he was a student. These experiences, he said, shaped his understanding of the fashion business.

“My philosophy is to believe you’re never there,” Anderson advised the students, adding how he travels between London and Paris once a week to manage the two brands. Anderson was appointed creative director of Loewe in 2013.

He spoke about how the luxury business has come to a point where people believe “bags grow on trees” and have forgotten about the dedicated craftsman behind the merchandise. He discussed Loewe’s new prize to recognize talented craftsmen. The 50,000 euro, or $57,000, cash prize will be awarded for the first time in April 2017. Part of Thursday’s party had several artisanal concessions featuring a sketch artist painting portraits of guests and a Loewe employee making leather key holders with customized initials imprinted on them.

As for his own label, Anderson said he’s in a good place and that business has “quadrupled in the last three [to] five sessions.” He looks forward to adding more stores across Europe in addition to his flagship in London.