Far from playing it safe, the Spanish designer intently spins his vision for building buzz on the global stage. 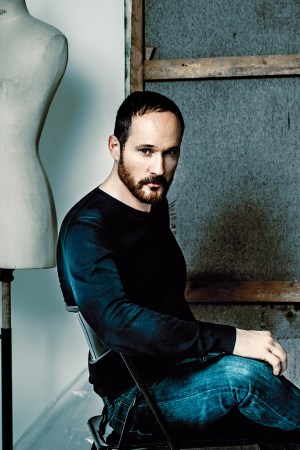 It was 10 a.m. but Josep Font’s clock, as he settled into a leather banquette at the New York outpost of Sant Ambroeus in SoHo, was badly out of sync thanks to transatlantic jet lag that kept him up all night. “Terrible,” he said, shaking his head, sipping an iced tea to revive. A day prior, the 47-year-old creative director of Delpozo had touched down from Madrid, where he is based, to scout venues for the brand’s New York Fashion Week show in September. The spring 2016 collection, he said, is about halfway complete.

Not that Font isn’t used to waking up early. Since his appointment at Delpozo in March 2012, the designer’s typical workday has started at 7:30 a.m. (after he walks to the brand’s headquarters in Madrid, arriving before the rest of the design team to cherish the morning solitude — the calmest part of his day), and he remains there until 8 or 9 p.m. From his tiny atelier, Font has transformed the Spanish heritage house, founded in 1974 by the late Jesus del Pozo, into one of fashion’s most inventive and highly anticipated brands, reinvigorating it with a fresh modernity.

Polite, and even subdued in demeanor, Font loosened up as he spoke Spanish, his native language. On the morning after the Met Gala, conversation quickly turned to an assessment of the red carpet fashion; Font lit up with laughter as an iPhone displaying celebrity Instagram memes was passed around the table. (For the event, Delpozo dressed Indre Rockefeller — a social fixture and also the brand’s U.S. president — in a sheer black-and-blue floral-embellished gown.)

But back to Font’s first order of business: selecting a venue for his seventh Delpozo collection. It will be the sixth collection presented in New York — where his shows have become a hot ticket — a city that excites him because of its energy, where “people still get excited about fashion — and excited to dress up,” he said.

Font, intently focused on Delpozo’s development, has exacting standards for how the brand is presented. For one, he insists that his venues never have an elevated runway platform. Natural light is also essential. “I want people to physically see the details and the quality,” he explained. “It’s important for people to engage with the collection. They’re always telling me to show in a bigger space to accommodate more guests,” he said, referring to his public relations team. “But if we do that, we sacrifice the intimacy of the shows I’m trying to create. The most important thing is for people to feel intimate with the clothing.”

It is true that Font’s designs, often referred to as prêt-à-couture, are better suited to a small, salon-style setting than some megastadium with flashy lights. Season after season, editors praise Delpozo’s voluminous, structural proportions and innovative pattern-cutting techniques rendered in contrasts: at once traditional and modern, organic and architectural. His soft pastels appear alongside vivid, electric hues; structured silk twill tops come paired with skirts in diaphanous tulle or organza. A knack for embellishment and hand-embroidery mark his unconventional eveningwear with a youthful spirit and touch of whimsy. In a time when so many designers parade safe and perfectly wearable separates down their runways, Font’s creations for Delpozo manage to transport, surprise and delight.

Before he assumed the helm at the label, Font, born in the Santa Perpètua de Mogoda region of Barcelona, was a seasoned ready-to-wear designer and couturier whose work over several decades culminated in an invitation by the Fédération Française de la Couture to show his collection at Paris Couture Week in 2007. He owned several shops bearing his name in Spain and one in Paris on Rue de la Sourdière, which lasted four years in business.

Citing artists Mark Rothko, Jean-Michel Basquiat, Charles Trenet, Andrey Remnev and Emir Kusturica as inspirations, Font said he developed an early interest in fashion thanks to his late mother, Teresa Calvet. “She was a very elegant woman, and from when I was young, I would go shopping with her to these great boutiques,” he said. “She would ask, ‘Do you like this?’ If I didn’t like it, she wouldn’t buy it.”

But as he matured, Font’s parents, particularly his late father, Artur, didn’t exactly embrace his interest in fashion, forcing him to study architecture at the Polytechnic University of Catalonia. “I came from a family that was rooted in business,” he said. “‘You can’t go to school for fashion,’” Font remembered his father telling him. So, while working toward an architecture degree, Font studied pattern-cutting and design on the side. “When I finished my degree, I said, ‘Dad, I finished architecture, but I also made this collection, and this is what my real passion is,’” Font said.

“If you have children, you really have to support their passions from the beginning,” he continued. “And you can’t push them to do something they don’t want to do.”

And yet, despite a disinterest in the field he studied, an architectural influence resonates throughout Font’s designs for Delpozo. “Now I look at architecture as more of a hobby,” he explained. “And I love it, since it’s not forced upon me.” To wit: Font designed his second home in Viladrau, a region of Catalonia where he spends his weekends, and also helps out his friends with their interiors.

Since its acquisition by Grupo Perfumes y Diseño in 2011, Delpozo has been on a rapid, yet careful and considered, path to expansion. In appointing Font — who doesn’t have a stake in the company — more than three years ago, the goal was to turn the brand, which until then had only been sold in Spain, into a globally recognized luxury label. Delpozo now counts 56 points of sale in more than 30 countries throughout Europe, Asia and North America — Harvey Nichols, Galeries Lafayette, Browns, Bergdorf Goodman, Kirna Zabête and Lane Crawford among them — and operates two flagships: a 2,500-square-foot store opened in February 2014 in Miami’s Design District, and another on Madrid’s Calle de Lagasca, opened in March 2013. Font said the brand is eyeing a New York outpost next.

Product categories are growing as well. Two seasons ago, with its fall 2014 collection, Delpozo launched a footwear line, which is made in Italy. A fragrance, which Font has been quietly developing in Paris for two years, is in the works, too. The brand will also show its first pre-fall collection next season with private appointments in New York and Paris.

All of this — in addition to the unique point of view that Font has brought to the label — has not gone unnoticed. Moda Operandi, an early supporter of Delpozo, hosted the brand’s first trunk show in the fall of 2012. “Many of our young designers are inspired by nightlife or subcultures, showing all-black, street-inspired looks,” said Lauren Santo Domingo, the online retailer’s cofounder. “At a time when it seemed many had stopped showing evening altogether, Delpozo gave us a fairy tale with unparalleled quality and craftsmanship.”

Bergdorf Goodman picked up the collection for the first time this spring. “There is a fantastical, dreamlike quality to Josep’s designs, and yet they are feminine and wearable,” said senior vice president and general merchandise manager Elizabeth von der Goltz. “There is nothing like it in the market.”

Every move Delpozo makes, from editorial requests to Instagram posts — where the brand boasts 266,000 followers — gets filtered through Font. “It’s really important to me that everything the brand does, in terms of the design of the stores, the different categories, from dresses to blouses to shoes, has one vision,” he said. “And that it’s not disjointed.”

This philosophy extends to dressing celebrities. “It has to be a certain event and a certain woman,” Font said, counting actresses Julianne Moore, Cate Blanchett, Hilary Swank and Kate Mara among his red carpet clients.

And for Font, that vision is less about aesthetics and more about an attitude. “It’s about how she carries herself,” he said, when asked to describe the Delpozo Woman. “Having seen the customers coming into the stores — we see the mothers come in, but also the daughters and the daughters’ friends….Ultimately, it’s someone who’s really looking for quality.”

Quality, naturally, means a hefty price tag. A blush silk twill and tulle gown embellished with beads and conch shells, currently on Net-a-porter.com, costs a cool $19,650, though most items are priced from $2,000 to $10,000, with footwear around $1,100.

Like the label he designs for, Font feels a sense of revival. “For a while, I was bored by fashion,” he said. “There wasn’t that freshness and newness in the collections. What I mean to do with Delpozo is to give fashion a new take. I want people to see something fresh, clean and new, and to make sure that the quality of the clothing stands out above all.”