Both Paris and New York influence the adult allure of his collection, which this season found a big suitor in Kering. 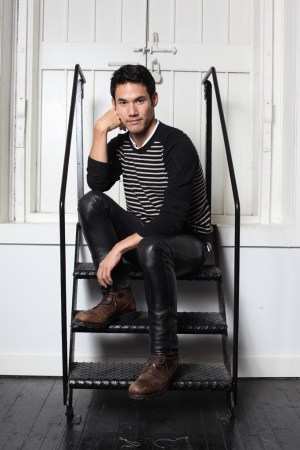 Joseph Altuzarra was in a state on the afternoon of September 5. With 48 hours to go before his spring runway show, the designer was exhibiting all the symptoms of typical exhaustion, compounded by the fact that he had just signed a life-altering deal with Kering, the luxury conglomerate formerly known as PPR. Dazed and a little confused—but excited!—Altuzarra could barely remember who had pursued whom in the high-stakes courtship that resulted in Kering taking a minority stake, estimated at 40 percent, in his label. “I swear I’m not being coy about it,” he said at the time. “I literally don’t remember.” (Kering approached him.)

Five weeks later, with ample time to digest the events of the season, Altuzarra is the picture of serenity and self-possession in his Howard Street studio. His collection was a knockout, one of the most memorable shows of the season, let alone on the New York schedule, not for its flashy theatrics—he prefers a minimal set—but the cool confidence of the clothes, which were inspired by the Japanese patchwork technique of Boro and Altuzarra’s now-signature French-American sophistication. By early October, the perks of his new membership in the Kering club had begun to take effect, with the investment dollars being put back into new hires, homing in on production and logistics.

“The show got a really great sales response. I think the partnership with Kering got a really strong response as well. It’s been superinteresting to see it through the prism of what happened later on in the season,” he says, referring to the subsequent flurry of acquisitions by Kering competitor LVMH Moët Hennessy Louis Vuitton that transpired in September. “J.W. Anderson, Nicholas Kirkwood…”

What did Altuzarra make of this hive of activity? “It’s a generational shift,” he says. “There’s been this really incredible moment when you sort of realize that, yeah, we are all very young, like Alex [Wang] going to Balenciaga, but it feels like we are also growing up. I do think it’s a really interesting move. It’s much needed, it’s great that it’s happening for my generation.”

The last generation that was subject to such investment became industry mega designers—Stella McCartney, Alexander McQueen, John Galliano and Marc Jacobs—all of whom were plucked from the fashion farm teams to some extent in 1996 and 1997. “It’s a very daunting parallel to think about Galliano and McQueen,” says Altuzarra.

Indeed, there are differences between him and his elders, who were nurtured as artists with creative carte blanche, while the younger set has been weaned on a balance of art and commerce. From the beginning, a pragmatism has guided Altuzarra’s business and design philosophy. “The basic idea is that I want these clothes to feel like they are real,” he says. “It doesn’t have to do with things being pared down or simple. It has more to do with knowing exactly whom we are designing for and what that woman wants to wear. I want to dress women and not girls.”

He talks about how fitness, beauty and plastic surgery have shifted the way women view themselves, prolonging their allure well past middle age. “It came from very much speaking to my mother and her saying, ‘I’m 56 but I feel like I’m 35.’”

Altuzarra’s mother did more than influence his target audience; she was chief executive officer of her son’s company from the launch in 2008 until 2011, when she hired Karis Durmer as ceo. Karen Altuzarra is now the chairman.

The young Altuzarra grew up in Paris, not in a fashion household but a finance one. The son of bankers, his mother, who is of Chinese-American descent, worked at J.P. Morgan and his father, who is French, at Goldman Sachs.

Altuzarra does not look back on his Parisian adolescence fondly. “I was very unpopular in school,” he recalls.

So when it came time for college, he fled to a place where being unpopular was cool, choosing one of the most unfashiony of niche liberal arts schools in the U.S. “It was voted least attractive campus,” says Altuzarra of Swarthmore College, which he chose after seeing the Nineties teen film Ten Things I Hate About You, in which the moody, high-school misfit heroine played by Julia Stiles longs to attend Sarah Lawrence, a school similar to Swarthmore. It’s the kind of left-leaning campus where a protest was a more appealing extracurricular than a keg party, and fashion was not considered PC. “I remember there being an Abercrombie & Fitch catalogue shoot on campus and there were protests,” says Altuzarra. “Instead of people thinking it was cool, people were like, ‘Oh my God, this is outrageous.’”

He embraced fashion as his personal against-the-grain crusade, working in the campus costume shop where he learned the basics of patternmaking. Fashion design became his own independent study, which he took increasingly seriously, staging runway shows each year the way a student at a fashion school would. He graduated with a technical proficiency and an inferiority complex: “Because I didn’t go to fashion school, I felt like I really didn’t know enough to work in the industry.”

Like a good son of an investment banker, Altuzarra spent one summer interning at Goldman Sachs followed by stints at New York Model Management and Mao P.R., after which agency work—modeling and p.r.—were checked off his list of career possibilities. But his eyes were opened to fashion as a serious prospect. “I don’t think anyone realizes before they work in fashion how many jobs there are,” says Altuzarra.

The industry matrix is far easier to navigate once you’re on the inside, though there are still a million paths to take. Altuzarra found himself in the express lane to the top, something he partially credits to luck, chalking his internship at Marc Jacobs up to his résumé being on the top of the pile—A for Altuzarra. Even if that’s true, he wouldn’t have made it this far up the fashion food chain without an inherent aptitude for design. He went onto Proenza Schouler, working on Lazaro Hernandez and Jack McCollough’s then-tiny design team, and making a critical connection in the patternmaker Nicolas Caito.

“He became my mentor and taught me everything that I needed to know technically,” says Altuzarra. “He was the one who said, ‘You need to work in Paris.’” He heeded Caito’s advice and moved back to Paris, where a headhunter placed him at Givenchy with Riccardo Tisci. “That was exposure to the whole French fashion world,” says Altuzarra, crediting the time he spent in Tisci’s studio for the opportunity to learn the workings of a major, and also for his introduction to three women who became his key muses, patrons and collaborators while there: Carine Roitfeld, Vanessa Traina and Melanie Huynh.

They are the “women, not girls” Altuzarra has designed for since the beginning. Traina and Huynh now work with him, styling the show. Roitfeld, whose patronage is known to open doors, was an early supporter of his collection. She attended his fall 2009 presentation—his first formal showing on the New York schedule —wearing a fur-trimmed coat from the collection, and continued to be photographed in it throughout the season. It’s easy to imagine her in the thigh-slit pencil skirts and sensual takes on men’s shirting from Altuzarra’s spring collection.

For someone who started as a fashion outsider, Altuzarra has been quickly indoctrinated into the elite inner circle. Now with Kering’s endorsement he seems poised for big things. It’s enough to go to one’s head.

“I’m very aware that I’m very ‘It’ boy right now,” says Altuzarra. “But I won’t be the youngest, coolest thing forever. Other people are going to come up…I also didn’t do this job to be super famous. I did it because I really love it.”