The Joss Sackler-backed brand is forging a direct-to-consumer path with the addition of e-commerce.

LBV, the ready-to-wear brand, is leaning into a direct sales model, adding e-commerce through a relaunch of its web site.

The luxury-priced collection, only two seasons old, is an offshoot of founder Joss Sackler’s female members-only wine club Les Bouledogues Vigneronnes; LBV has “evolved more into a culture club,” Sackler said over a Zoom call from her Florida home. “In the beginning, the membership wanted swag, something emblematic of their membership,” she explained.

As chief executive officer, Sackler first assumed that meant everyday pieces like hoodies and leggings. But she said things quickly evolved as her membership ultimately gravitated to more luxury pieces, explaining that the full offering “was born out of the demand from the membership.” For spring 2020, its ready-to-wear debut, the ceo brought on Elizabeth Kennedy as creative director to help elevate the collection.

Historically the luxury category — some pieces at LBV top out at around $7,000 — is a challenging niche to carve out, but Sackler comes to the table with her own notoriety. She is married to David Sackler, whose family owns Purdue Pharma, the maker of OxyContin. The prescription drug company has been sued by governments and individuals for its hand in the opioid crisis, and last year filed Chapter 11 as part of a proposed settlement that has stirred even more outrage. Meanwhile, cultural institutions supported by the Sackler Foundation and family have either returned grants or decided to not accept any future ones.

While Joss is not technically part of the prescription drug company, she is, through her last name, attached to the family’s cultural notoriety — and her company has been caught up in it.

At her 2019 runway debut, Sackler employed a substantial security detail, and the show stirred its own outcry that played out in the press. Brands often invite celebrities and compensate them to attend to build buzz — in LBV’s case, this lead to a dust-up with singer Courtney Love that played out on The New York Post’s Page Six.

“It is industry standard to compensate talent for fashion show appearances,“ Sackler told WWD of the situation with the rock singer. “As soon as the ask for her desired compensation from her team got to me, I said no. We never made a formal offer.

“I think, understandably so, no one wants to get dragged into bad press,” Sackler explained frankly, when asked about how retailers have responded to her brand’s link to the family name and controversy. “I would say that some of the narratives that are out there [about the family] in the media are just not factual.”

She added, “however, it could scare a retailer who doesn’t want to get a negative story.”

LBV had used trunk shows in the past as a way to build brand recognition at retail, and both Sackler and Kennedy reported past events at Neiman Marcus and Saks Fifth Avenue were “successful.” The pair had another trunk show planned with Bergdorf Goodman before the coronavirus put the world on pause.

“Even though we’ve had pushback,” Sackler said of retailers’ response to the family name, “we continue to still have orders with all of the retailers we had been seeing.”

“We’re not the first brand to have controversy around it,” creative director Kennedy added. “I think the retailers are kind of used to it. At the end of the day they are excited to have a new brand on the floor. And they are thrilled with the orders.”

“When it comes to pushing through the controversy about my last name, the approach is going to be what it always has been,” Sackler said bluntly.  “We push forward. 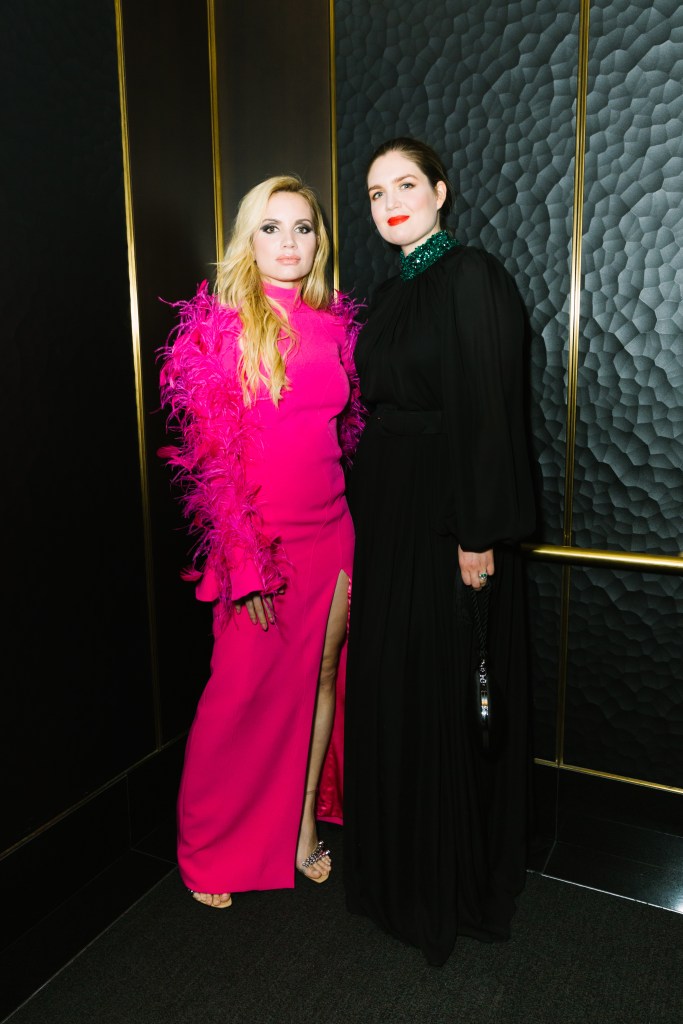 “The biggest concern for us is today is COVID-19 and pushing though that and how that has affected everyone globally,” she added.

The brand had been working on its glitzy autumn collection — both Sackler and Kennedy say power dressing is at the center of LBV’s DNA — all manufactured in New York’s Garment District. But the production of the fall collection has been slowed due to the global pandemic. The company has implemented a “strategy to scale back our production, but do so in a way that doesn’t affect the livelihood of our team,” Sackler noted. LBV hasn’t had to lay off or furlough any of its team, with the ceo explaining that “it is a fine balance between scaling back production without having it be at the cost of people’s livelihoods.”

Before COVID-19, the brand had begun laying the groundwork for the web site’s relaunch. Up until now, the site focused on brand awareness and highlighting new collections, and while it does sell a limited assortment of accessories, it wasn’t built for high volume e-commerce.

With the relaunch, the site will serve as a hub for brand members, with a log-in for them to access their benefits and specialty pricing — members get 20 percent off the collections. In addition, the brand has now partnered with Shopify and created an e-commerce direct sales platform that is available to nonmembers as well.

According to the brand, the new site will focus on quality content, including a blend of product drops, edited capsules and non-product based content highlighting partners such as Acker Wines.

“We were always thinking around this time, we’d redevelop the web site and add in the DTC channel, instead of just filtering everything through retailers,” Sackler explained of the relaunch. “It [the coronavirus] accelerated our plans to shift some efforts onto e-commerce.”

The new web site goes live on May 16 and the brand is projecting a 15 percent increase in customers month-over-month throughout the year.

For now, LBV, like many New York-based brands, has pivoted to help the response to the pandemic by creating personal protective equipment. “Owning an apparel company during this pandemic,” Sackler said, “it aligned very well with us being able to shift our focus and help produce PPE.”

Using a mix of volunteers and donated fabric the brand set out to make masks, originally with traditional cotton, of which it made 1,000. “After learning a few things from the initial batch,” Sackler said the brand switched to using Halyard fabric. “The weave is almost as effective as the N95 mask,” Kennedy explained, adding that they have changed gears to exclusively produce masks using the fabric.

The brand has committed to making 6,500 masks, donating to several institutions including Masks 4 Medicine, New York-Presbyterian and Mount Sinai Morningside.

Looking forward, Sackler is looking to leverage the brand’s presence online: “One of the things I have my eye on is Amazon,” she said. “Throughout this crisis they have proved to be very resilient as a retailer.

“There were hints in January that Amazon was planning to launch a luxury-focused platform and I think it’s really smart,” she noted, adding that she wants to explore it more. (WWD exclusively reported on Amazon exploring a luxury platform on Jan. 8.) “I would definitely be up to having our product sold on a platform like Amazon. Even though we might be the outliers, as there aren’t many luxury brands on Amazon yet, it’s something I’m interested in.”

While their fall market was cut short because of the pandemic, Kennedy said talks with retailers, domestically and internationally, were “successful.”

“Fifty percent of the spring collection’s sales were international,” Kennedy said, naming international retailers such as 51 East and Glamour [Qatar], as well as Saks Fifth Avenue Kazakhstan as retailers interested in their fall offering.