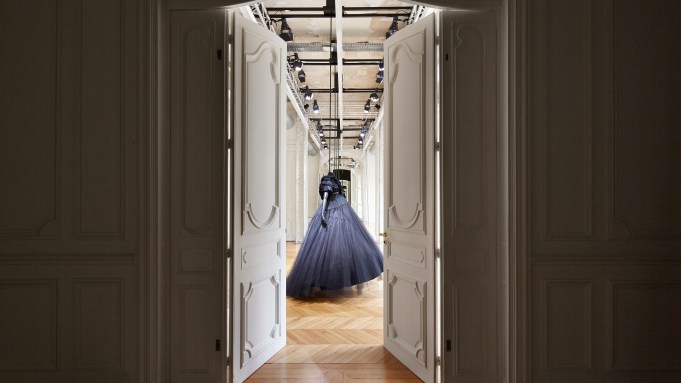 It’s 10:45 on Friday morning, the first day of the Journées Particulières, or “open days,” at LVMH Moët Hennessy Louis Vuitton-owned brands, and the waiting line to access the couture workshop of Christian Dior already stretches around the corner to Rue François 1er.

Inside, visitors walk up the grand staircase, which once served as a runway and auditorium to stars including Rita Hayworth, Lauren Bacall, Humphrey Bogart and Marlene Dietrich, their black-and-white photographs still bedecking the town house’s signature light gray walls.

Dietrich used to live across the street at the Plaza Athénée with her lover Jean Gabin, the group learns. As the story goes, the moody actress, who was a great fashion aficionado and a loyal customer, demanded to be dressed by Mr. Dior for her role in Alfred Hitchcock’s “Stage Fright.” “No Dior, no Dietrich,” she reportedly told the director, who had no choice but to pay for the costumes.

“The power of Dior is that the creation and realization — so the studio and the atelier — are both under one roof and that creates a symbiosis, which is what Mr. Dior himself wanted,” explained the firm’s president and chief executive officer Sidney Toledano, taking WWD on a private tour. Indeed, there is constant movement between the floors. Studio directors Serge Ruffieux and Lucie Meier, who stepped into the spotlight following Raf Simons’ departure last fall, are sitting on the floor against the backdrop of a large mood board spanning the entire wall in one room, while an army of tailors dressed in white smocks rushes through the corridors outside.

It’s the beginning of the couture season, which will climax with a show in July.

All the while, private orders, many of which are sumptuous wedding gowns, scream for attention.

“People always ask me: ‘Is couture dead?’ And I say: ‘The contrary is the case. We will always find a clientele — she might be more Brazilian or more Chinese at times. But the real question is: ‘Who will make that next dress?” Toledano said.

Between five to six seamstresses work on one style, which requires between 600 and 700 hours of work. “We employ about 100 artisans permanently, before the shows we take on another 30, but we need more. We really need to train more people,” the executive revealed, adding: “It’s the goal of days like these to give the public a glimpse of what we do, but also to attract a new generation of apprentices. Come on, let me show you something,” he said, before leading up to a loft-like space on one of the upper levels, which will house the future tailoring workshop managed by Kamil Arslan. This way, he explained, the atelier flou, where Dior’s dresses are created under the helm of Florence Chehet, whose influence has been revealed in the 2014 documentary “Dior and I,” will have more room downstairs. “It will also allow us to finally hire more apprentices,” Toledano enthused.

At Moynat, which is participating for the first time after being acquired in 2010 by LVMH’s chairman and ceo Bernard Arnault via his investment vehicle Groupe Arnault, the generational change is already in full swing. Eight of the 10 artisans that are hard at work that day stitching together the brand’s signature Pauline, Réjane and Vanity bags, are in their 20s. The atelier’s technical director Jonathan Rebouh, an imposing figure with large hands, called it “the Moynat generation.” “I receive CVs every day, but we just don’t have enough space around here,” he said of the small two-level workshop hidden in a quiet Parisian street behind the Marché Saint Honoré. It takes three to four days to produce one leather good, which is traditionally sewn with two needles attached to one thread, rendering it “virtually indestructible,” he said. A young woman in a corner assembles millimeter-thin pieces of a marquetry pouch as if she was laying a puzzle. When touching the surface, one feels no difference between the colored parts of the train motif and the pouch’s background.

A few streets away, on the Place Vendôme, Paris’ jewelry hub, Chaumet’s ceo Jean-Marc Mansvelt, said opening the doors to the public is an important tool to attract a younger generation of customer. The storied label, which dates back to 1780 and used to be a favorite of Napoleon and his fashion-obsessed wife Joséphine, has initiated a number of projects to attract Millennials. A mini-movie the brand shot about Joséphine in 2015 generated just almost five million views. Another feature about weddings seen through the eye of Chaumet, which premiered three weeks ago, has already been seen by 700,000 people, he said. Aggressive marketing has never been the house’s forte. “We are so not bling, bling,” Mansvelt said. “Chaumet is about discretion.” Ironically, the house’s signature piece is the tiara, of which it still creates two to three a per year, with each requiring roughly 1,500 hours of crafty handwork.

Wandering between the stations set up to demonstrate how a piece of Chaumet jewelry comes to life, a group of visitors grilled a senior artisan about every step of the process: How are the diamonds held together with so little metal? How does he know where to put the stones? And who will wear the tiara in the end?

He smiled calmly. “The transmission of our savoir faire is key,” he said, musing how a young Chaumet apprentice, barely out of school, has already won the Gold Medal of France in jewelry.

But don’t get fooled. “It’s difficult [to build the next generation],” attested Antoine Arnault, who spearheaded the group’s open days project. “Today, people prefer to work in digital, not perform a manual job, but these jobs are beautiful and they are also the jobs of the future; we just need to valorize them and make them as important as they are,” the son of Bernard Arnault told WWD during the preview of a photo exhibit celebrating the luxury group’s army of artisans on Thursday.

Arnault said he would make the rounds, visiting some of the 40 brands and 50 work sites belonging to the luxury conglomerate that have opened their doors for a three-day run which ended Sunday, including Berluti, Dom Pérignon, Fred and Guerlain.

At Givenchy in Paris, visitors were particularly interested in finding out more about designer Riccardo Tisci’s creative process, who with his dark and mysterious aesthetic attracts the likes of Beyoncé and Julianne Moore. “Riccardo has an affection for the skeleton of the human,” revealed a seamstress. “He likes to expose its structure through fabric.” She explained that Tisci’s experimental, see-through couture involves one thing especially: “scientific research.”