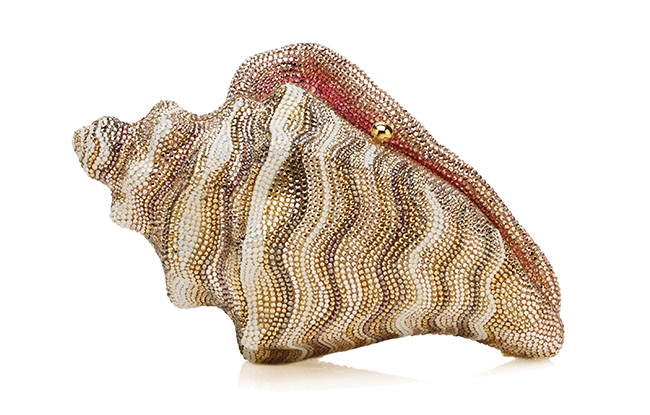 Dee Ocleppo Hilfiger, luxury handbag designer and entrepreneur, is ready to take on a new challenge. She has forged a strategic partnership with Authentic Brands Group for the luxury accessories brand Judith Leiber. Ocleppo Hilfiger will become the brand’s co-owner, creative director and global brand ambassador.

Taking on a minority stake, Hilfiger will work with the ABG team to develop the core brand collection, while extending the brand to new categories, distribution channels and territories. Leiber is best known for its Swarovski crystal-encrusted minaudières and whimsical animal and food clutches that have become fashion essentials for celebrities and first ladies. The first Judith Leiber x Dee Ocleppo capsule collection is planned to launch in stores and online for holiday. The amount of Ocleppo Hilfiger’s investment in Leiber was not revealed, nor the level of her stake.

Reached in Florence where her husband, Tommy Hilfiger, was staging his fall men’s fashion presentation, Ocleppo Hilfiger said she’s been a fan of the Leiber brand for many years. “I’ve had girlfriends who actually collect them. The small minaudières are almost like jewelry pieces,” she said. “What I’m interested in doing is seeing where we can take the brand. Nowadays the biggest complaint is, ‘We can’t fit phones in the bag.’ It’s an interesting challenge to evolve the brand. I would love to do a collaboration with Apple or Samsung, or do some kind of tech marriage to update it a little bit. I’d also love to do some quirky things.”

Hilfiger said the Millennial customer may not be completely aware of the brand and that’s where she’d like to focus.

“Dee’s style and creative influence will infuse the brand with a new and relevant outlook that will be integrated across core and new categories,” said Nick Woodhouse, president and chief marketing officer of ABG. “The partnership brings a real opportunity to expand the Judith Leiber footprint across fashion, fragrance and accessories industries.”

The deal with Ocleppo Hilfiger is the latest chapter in the Judith Leiber story, a brand that has long been considered a major American luxury accessories label. The company was founded in 1963 by Judith Leiber, who was known for her meticulous attention to detail, whimsical designs and handcraftsmanship. It was sold to Time Products in 1993, and Leiber, who is now 95 years old, retired in 1998. The company has since been through several owners, including Pegasus Apparel Group — which aimed to build a major American luxury group centered about Leiber; Schottenstein Luxury Group, and now ABG, which acquired the company in 2013. Today, Leiber is under the creative direction of Jana Matheson, who will continue in her role as creative director of the couture bags.

For four years, Ocleppo Hilfiger has had her own luxury handbag business, known for its versatility.  While she started her own business with a line called Designs by Dee Ocleppo for HSN Inc., she later designed high-end handbags under the Dee Ocleppo label for such stores as Harrods and Saks Fifth Avenue that were made of exotic materials such as python, as well as leathers and furs. Those handbags carried average retail prices of $950 to $1,200, with some going as high as $2,500. The bags are now only available through her web site.

Hilfiger also developed a Bag Bar business, which owned a patent that offered consumers the ability to add interchangeable covers and accessories to classic handbags, combining functionality and style. That business was sold to Kate Spade & Co. last year for an undisclosed sum. Ocleppo Hilfiger was honored with the Rising Star Award for accessories from Fashion Group International last year.

Describing her new role at Leiber, she said, “I’ll go in every day that I’m in town. My travel schedule is pretty grueling, but I’ve become obsessed with it [Leiber], and I’m superexcited about it. I’ll be overseeing things. With my line, it was pretty intense. It was soup-to-nuts for me. I was going to shows, I was designing. This is intense as far as the challenge, but it’s a different kind of work. I don’t expect to be getting on planes and flying over to the skin shows. Hopefully it will be a little less intense, but more interesting,” she said.

Ocleppo Hilfiger likes the idea that she’s not starting a brand from scratch. “To launch a new brand is incredibly challenging. This is a brand that’s been around for a long time. I see that as a huge advantage. It’s kind of like starting a race, but you’re given a huge head start.”

She said she will have designers helping her with the Judith Leiber x Dee Ocleppo Hilfiger capsule. At one point, Leiber had a lower price collection called Overture by Judith Leiber but that no longer exists.

One of the potential categories Ocleppo Hilfiger would like to launch is homeware, such as picture frames, dinnerware and glassware. “I’d love to do a gift-card collection, I can also see it going into evening gowns. There’s already a shoe license and perfume and eyewear. We’ll take an overall look at everything,” she said. “Part of the challenge with what is going on at retail is keeping it unique and fresh. I like the idea of doing one-off collaborations, especially with collector items. It’s there, and if you don’t get it, we’re on to the next,” she said.

They’re in discussions about the capsule collection. “That would be the more affordable bags,” she said, adding she’s been researching the brand and going through Leiber’s archives and has been amazed at how much Leiber did. In fact, an exhibition of Leiber’s designs, “Judith Leiber: Crafting a New York Story,” is slated for April 4 through Aug. 16 at The Museum of Arts and Design in New York.

Woodhouse said he welcomes Ocleppo Hilfiger’s creative input and noted that the Leiber business “is clearly the most prestigious brand in our portfolio,” and declined to reveal the company’s volume.

“It’s the jewel in the crown for us,” he said. “If you’re in the luxury business, unless you’re one of the huge luxury houses, it’s very hard to move the needle. There are many celebrity designers who say they are designers. She’s not someone who’s going to sketch and C.A.D. out a handbag. She has impeccable taste and knows the luxury circle and knows the everyday woman. She will bring those sensibilities together for us.”

Leiber has five locations overseas, and does very well in India, United Arab Emirates, Asia and central Europe. Woodhouse said there will be some sharpening of price points to make the line more accessible to the midtier level. At present, Leiber’s bags are sold at stores such as Neiman Marcus, Bergdorf Goodman, Harrods, Joyce, Holt Renfrew and Saks Fifth Avenue. The brand has a “terrific social inprint,” Woodhouse said, and many celebrities carry the bag on the red carpet, such as Viola Davis, who carried one of the brands bags Sunday night at the Golden Globes.

“Dee will absolutely be out there talking to customers, both our retail customers and our direct customers. She’ll be very active on social, tying her social with the Judith Leiber social, and she will also be active in the design process with our licensing partners around the world,” said Woodhouse.

He agreed the company needs to court a younger customer and the bags need to be able to carry a cell phone. “We need to make it modern, make it more contemporary with different colors and exotics. It took us awhile to solidify the business. We’re very happy with the business. Now the time is to grow. We’re going to open up a bit, use different fabrics, different clasps and different shapes to get it on the youth,” said Woodhouse.

Bags retail from about $1,850 to $7,500. He said Millennials are aware of the brand, but not as much as they should be. “We need to fund that through marketing, digital and social. We might even do ads with some of the other brands in our portfolio.” ABG, which does just shy of $5 billion in retail sales, has more than 25 brands, including Thalia (a 50-50 partnership with Thalia), Marilyn Monroe, Elvis Presley, Muhammad Ali, Shaquille O’Neal, Michael Jackson, Juicy Couture, Aéropostale, Adrienne Vittadini, Spyder and Prince.

“We want to make this not your mother’s Leiber,” he said. “We’re going to expand the offering and the distribution. We’re incredibly excited to partner with Dee. She’s a real force and terrific on social. The meetings we’ve had with her, her input has been tremendous.”