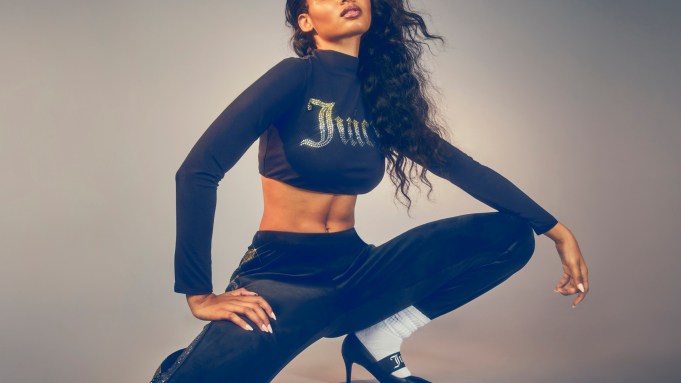 Juicy Couture marks its 25th anniversary this year, and the label’s owner, Authentic Brands Group, has plans in store.

By leveraging Juicy’s history as an early-Aughts celebrity favorite and pioneer in ath-leisure, ABG believes the brand is positioned for a new stage of growth.

“In terms of history, the brand is celebrating its 25th anniversary and we are super-excited about it. From the time ABG acquired Juicy from 2013 to now, our focus over the last seven years has been on the heritage side of it, the Los Angeles style, the heritage pieces of those Hollywood days,” said Alexandra Taylor, senior vice president of marketing at ABG.

Juicy’s anniversary celebrations were initially delayed due to the coronavirus crisis. The occasion does come, however, at a time when people are spending an unprecedented amount of time at home — much of that while wearing sweatpants, Juicy’s sweet spot.

“I think unfortunately, given everything that’s going on, it’s affected everyone’s business, distribution and stores. But for the brand to have the ability to leverage its ath-leisure and loungeability as core items, with our tracksuits that you can mix and match, is an asset [in this time]. This situation has elevated and escalated demand, so more than anything we are quickly trying to leverage. We have a new U.S. site and several partnerships launching, so we are trying to harness everything going on,” said Taylor.

While Juicy still holds a nostalgic place in young consumers’ hearts, the brand has done some considerable updating to its silhouettes, particularly that of its pants, which at Juicy’s peak were flared and low-rise. “Our collections have evolved in the last 10 years, we offer a variety of silhouettes. Some are similar to the original with more of a bootleg instead of a flare, we have a high-rise jogger style, with pockets or not,” Taylor said.

See Also: Are Sweatpants the Only Fashion Trend in America Right Now?

Juicy Couture’s U.S. web site will launch next month, built as a shopping destination for everything Juicy on the web. It will eventually expand to include a Juicy marketplace — a boutique of like-minded products from third-party brands, making Juicy something of an online landing spot for all things girly and casual. The marketplace is scheduled to launch in the first quarter of 2021.

“We will be launching like-minded brands on site as a fully fledged marketplace — we are not against adding apparel, but it would have to be something that aligns with our offering, like swimwear. There will be footwear, hair accessories and other collaborations,” said Taylor.

While Juicy was once distributed across a suite of department stores, the brand is aiming to take its distribution back and sell direct through this new site. “Definitely one of our strategies is to focus on more on a direct-to-consumer model and being able to give a platform to other partners as well,” said Taylor.

The Juicy brand has gone through a few waves of comebacks since being bought by ABG. In 2016, the company negotiated a collaboration with Vetements — giving Juicy a brief moment in the spotlight again. All the while, the brand has kept a low profile on social media — considering how archival images of Juicy from its early Aughts heyday are in regular circulation.

“It’s definitely something we want to grow. Juicy is one of the first brands to come to life on social platforms so we are constantly looking to expand and push. We have had so much success with earned interest and media — we are not putting much into it from a paid perspective. Our audience doubled in the last two and a half years by working with influencers. Each of our international brands have their own channels to do strong p.r.,” said Taylor of the company’s social media scheme.

By year’s end, ABG will have launched a new group of partnerships for Juicy — including collections with Kappa, New York City Alliance and Apparis. The Kappa tie-up, which launched in September, has sold out of popular styles, including a velour hoodie and sweatpants.

At present, Juicy’s international markets are managed via license with partners including Shinsegae in South Korea, The Batra Group for the U.K. and Europe, and Zhejiang Semir Garment Co. in China. “We review all product design, as well as marketing and distribution plans, but we feel like they are experts in their region and we rely on them to define the best plans,” said Taylor.