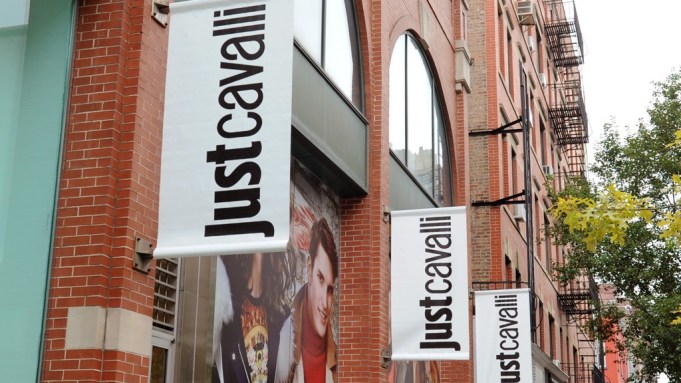 NEW YORK — Just Cavalli is back, and as flamboyant as ever.

“I think the brand was like a beloved child that was seriously ill, and I feel like the doctor,” Roberto Cavalli told WWD. “I enjoyed bringing it back.

“I like the idea of having the store on West Broadway, because I used to live there,” he added. “It’s an area that I adore. There are also a number of designer brands that rarely make mistakes in positioning, such as Giorgio Armani’s Emporio Armani store, for example.”

“In the last year, this area underwent a huge transformation with art galleries and stores,” said Monica Voltolina, chief executive officer of Staff USA. “Uptown, we’ve developed a strong partnership with Saks Fifth Avenue.” She said a shop-in-shop at Saks is in Just Cavalli’s future. Meanwhile, men’s wear is sold at Bloomingdale’s.

“We will open more stores,” Voltolina said. “We have tremendous success in Miami” with wholesale accounts. “Miami is definitely in our future, and Los Angeles for sure. It will happen very soon, I’d say we’re working on that.” Voltolina declined to be more specific. She said the brand could open a freestanding unit in Canada, where it has wholesale accounts.

“The line has been growing 25 percent to 35 percent each season, almost from scratch, after the Ittierre tragedy,” the designer said. “We need another couple of years to return to phenomenal [sales] figures.” Sales are now at around 90 million euros, or $121.6 million at current exchange. They were at around 200 million euros years ago, before Ittierre’s financial troubles.

The store references iconic Cavalli symbols such as animal prints, with python skin-pattern fabric embedded in glass steps on the staircase to the lower level, leopard print on diamond-shaped screens behind the windows and animal spots on a diamond-shaped video wall. “We gave a digital soul to the store,” Voltolina said. “It’s a virtual store for clients to see through renderings and images.”

An unusual sofa and side tables made from layers of fabric from previous collections was designed by Cavalli and anchors the main floor shoe area near the runway collection. The main Just Cavalli collection and pre-collection hang downstairs along with a men’s wear area and VIP room. The latter is paneled in blackened wood and has a large layered fabric ottoman. Some of the most unusual runway pieces hang in the VIP area, such as a short blue-and-white fox fur jacket for $20,965. Dresses range from $395 for jersey to $995 for embroidered silk. A black leather and lace jacket in the main collection is $1,400. Jewelry, watches and handbags are also offered.

Cavalli and Renzo Rosso, founder of Only the Brave, or OTB, which owns Staff, in December will attend a party at the store to celebrate the opening.