Anderson has brought innovation to Loewe and employed androgyny to lift the notoriety of his namesake brand. 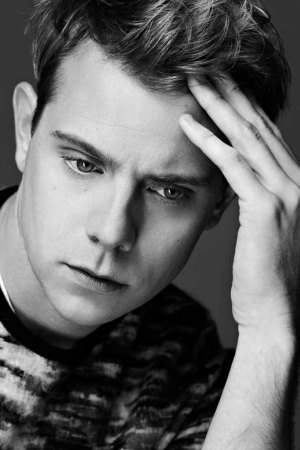 A thoughtful strategist and cunning image-maker, Jonathan Anderson has brought innovation to Loewe and employed androgyny — and a gust of the go-go Eighties — to lift the notoriety of his J.W. Anderson brand.

All of these factors and more churn in the tousled head of Jonathan Anderson, a 30-year-old designer with an intellectual bent he applies to his fast-growing J.W. Anderson brand in London and the historic Spanish leather goods house Loewe, which he’s helmed since 2013. He’s adamant that breaking through the clutter and succeeding in fashion today depends more on strategic thinking than miraculous draping or phenomenal sketching.

To be sure, Anderson has unfurled some pretty big ideas in recent years, particularly with his makeover of Madrid-based Loewe: Appropriating Nineties-era fashion imagery as present-day ad campaigns; bringing an unvarnished, borderline blunt cast to the typically glossy luxury world; and introducing some dramatic store concepts, exemplified by transporting a “borrowed” 18th-century granary building known as an hórreo from Spain and planting the stone structure as the centerpiece of its new Miami store. “I’m trying to go into the heritage, create new heritage, and trying to fundamentally excite people,” he explains.

He’s been no slouch with his J.W. Anderson brand either, fanning debate about genderless fashion via his modern androgyny for men and sticking a thumb in the eye of countless designers mining the Seventies as he shifted a decade ahead with his divisive ode to all things Eighties for his fall women’s collection.

“For me, fashion is exciting, and it should be exciting whether you get it wrong or right,” he says. “If you do generic things, you know, after a while, brands or designers become stagnated. You have to be slightly uncomfortable with what you’re doing, and you have to be able to try to find moments of newness.”

Analyzing today’s fashion, business and cultural landscape seems like a natural impulse for Anderson, an articulate, pensive sort, who is fond of four- and five-syllable words and typically dresses in a loose crewneck sweater and jeans. Asked about his approach to fashion — immediate, personal, a bit raw — he muses: “In terms of luxury, I feel like maybe the next 10 years are going to go through many changes as all industries do. And I think it is going to be about the idea of luxury and what does that really mean to people? You know, is it cookie-cutter? Is it about airport shopping? These are the questions that I feel are going to have to be asked.”

Born in Northern Ireland, Anderson studied men’s wear at the London College of Fashion, going on to work in visual merchandising at Prada under the late Manuela Pavesi. He consulted for several brands before launching his own label in 2008, initially showing off-calendar in London and ultimately demonstrating a flair for kooky, boundary-pushing designs such as frilly shorts and bandeau tops for men. Curiously, he says the androgyny emerged partly out of necessity: To meet fabric minimums for his men’s brand, he decided to do women’s and make the same thing for both sexes. Funnily enough, it caught on, initially in Japan, Korea and Singapore.

Soon came British Fashion Awards, two collections for Topshop, a one-off capsule for Versus beside Donatella Versace and, by 2013, twin deals with LVMH Moët Hennessy Louis Vuitton, which took a 46 percent stake in his J.W. Anderson label and handed him the star creative role at Loewe.

While he’s barreling toward fashion’s big leagues, his predilection for experimentation remains intact, especially in men’s wear. “There’s a lot more ground to be covered. And there are a lot more things to be challenged,” he says. “I think the men’s wear market is going through a slight cultural revolution.”

He’s also not shy about shaking up traditional notions of luxury, arguing that a store’s ambiance and character should reflect its surroundings and “have a bit of soul to it.” For example, Loewe’s diminutive Milan store, one of the first he tackled, retains the character of its previous purpose — an apartment — heightened by the addition of Arts and Crafts furniture, Anderson’s passion. “I think people want to be able to go in to experience something, and it doesn’t need to be this generic rollout. Because I feel the consumer is wanting to be challenged. Do you know what I mean? I think we underestimated the consumer,” he says.

The furnishings in Loewe stores — William Morris and Charles Rennie Mackintosh chairs are particular favorites — play into his idea of placing fashion in a broader cultural context. “I see Loewe as a public landmark, so anyone can go into it, like a library or a museum, so you have to be able to give back,” he says. “Plus it kind of gives the setting for the dress, and at the same time gives reality. I find sometimes luxury environments are very heavy, and very kind of one-directional. And collections are never like that.”

Anderson’s certainly aren’t. Each season, he builds up a look based on a different “character,” often interpreting a fashion decade in which he didn’t grow up. He’s up front that his collections involve heavy amounts of research that can include pictures, ceramics, vintage clothing — whatever — with looks mocked up via photo montages or on the body.

“I know it sounds really boring, but it is more just about a look,” he says. “I’m very open about my referencing, I’m very open about who I work with. I mean, this is not a one-man show. It’s two brands that I have to do, and both of them have huge amounts of extremely talented people and you collaborate with them, and that’s where modernity is today.”

Steven Meisel’s photography from the Nineties is an inspiration for Anderson, particularly a shot of Kirsten Owen and other models on a beach in Spain. “So the clothing is not mine, and the models — some are still modeling, and some are no longer — it doesn’t really matter: That was the woman, so there’s no point in me trying to reenact,” he explains. “I just liked the idea that this is my mood board, this is my reference point, and for me, they are some of the most iconic images in the last 20 years. Why not just put them out there?”

Anderson has strong opinions about the Internet age, too: He’s fascinated by how a person or a brand can now cultivate a huge following online. The ultimate example, he says, is soccer star Cristiano Ronaldo, who has 35 million followers on Twitter and more than 102 million fans on Facebook.

Thanks to social media, he observes, consumers now engage directly with brands and people they like. “I think there has to be a very noncalculated approach to it. That’s the joy in it — that it’s spontaneous. So brands have to be spontaneous. I think you have to be yourself,” the designer notes. “Instagram is a very fine example of it. People want that, because they don’t want to go through the middle man, they want to go straight to the source.”

Anderson’s energy and ambition are obvious. Asked to name designers he admires, he mentions one with a nuclear-powered work ethic: Karl Lagerfeld.

“I really do admire Karl for the velocity and the kind of uncompromisable-ness of it. He’s seen fashion evolve through a period where it’s probably changed more in his lifetime than it ever changed before it. And through that, you learn,” he says. “I think it’s incredible what he has accomplished at Chanel and it’s a very difficult thing he does with ease.”

Anderson is clear that when he started J.W. Anderson, his initial thought was to “make it into a brand” and not just introduce another designer collection. “It would be good that the brand stands the test of time, maybe even one day without me being there,” he muses.

Market sources estimate the J.W. Anderson business generates revenues of about 5 million British pounds, or $7.5 million, while Loewe is said to be approaching revenues of 350 million euros, or $378 million at current exchange rates.

“In terms of growth and in terms of projections, I think we’re on the right track,” he says about his signature business. “Ultimately it has to be a realistic growth.”

He noted the J.W. Anderson business is working to build up its wholesale following and direct sales via an online store. Men’s wear represents about 30 percent of the total, which he deems “stabilizing” as men tend to be more loyal to brands, and the market offers more expansion potential.

He sees a first boutique, probably in London, as three to five years away. “I just don’t think it’s necessarily the right moment to do, and I think it would kind of feel like it’s nearly too predictable,” he says.

Likewise, he’s proud that ready-to-wear sales at Loewe, historically a marginal category, have gone up, and that some of his initial bag designs, notably the Puzzle, Flamenco Knot and Anton, have found traction alongside its iconic Amazona bag.

He notes that his adventure at Loewe is young, with not even a year of sales under his belt. And while off to a promising start, he talks in measured tones. “For the consumer, if it grows too quick, then it feels unnatural, you know,” he says. “We’ve got a long journey to go, and if it happened overnight it would be really boring.”