The designer's first stand-alone store will feature pieces from her fine jewelry and handbag collections. 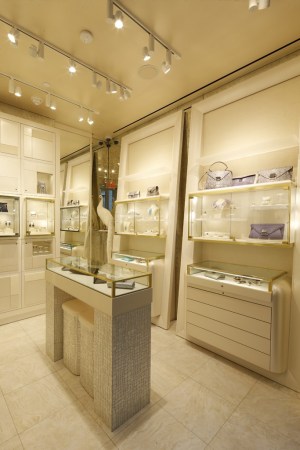 NEW YORK — With less than 48 hours until the opening of Kara Ross’ first stand-alone store, toilets are on the designer’s mind.

“We don’t have a bathroom in here,” the jewelry designer explained during a preview on Monday afternoon. “So, we’re sharing with the lobby next door. And we really need to redo it…”

Bathroom drama aside, Ross was relatively collected standing amid the construction of her new uptown flagship, which opens to the public on Wednesday.

“It’s like a little jewel box,” said Ross of the space.

Located at 655 Madison Avenue, the abstract idea of brick-and-mortar came to fruition upon finding the piece of prime real estate, which counts Michael Kors, Barneys New York and Brian Atwood among its neighbors.

“Our offices used to be around the block,” said Ross. “My kids went to Christ Church Day School, which is on the corner. It already felt like home.”

Alongside interior designer Tony Ingrao, Ross has been busy working on decor plans since signing the 10-year lease eight months ago. Construction on the space began just six weeks ago.

The 275-square-foot store is sparse in color, a deliberate design decision in order to let the pieces take center stage. Cream-colored walls and gold cabinets fill the room, with accents of mother of pearl, stingray and cork, thematic elements often seen in Ross’ work.

The voyeuristic concept of showcasing the jewelry in locked cabinets — a focal point of the store — came from a recent trip to Fortuny Palace in Venice.

“[The palace] has these various isolated cabinets within a wall called ‘cabinets of curiosities,’” said the designer. “Each one would have a different point of view, a different perspective. Each one was kind of a unique, independent experience.”

Kara Ross jewelry is currently sold in over 50 stores nationwide, including Bloomingdale’s, Henri Bendel and Intermix. The flagship will sell pieces from Ross’ fine jewelry and handbag collections. Fine jewelry items start at $2,500. Handbags range from $500 to $2,500. The designer’s lower-priced line, Kara by Kara Ross, will be available online only.

Ross aims for the store to do more than $1 million in sales in its first year. Ross hopes that current brand devotees will become regular customers, as well as Madison Avenue passersby. The designer also plans to capitalize on the upcoming holiday rush with extended hours. The store will be open late seven days a week through Dec. 30.