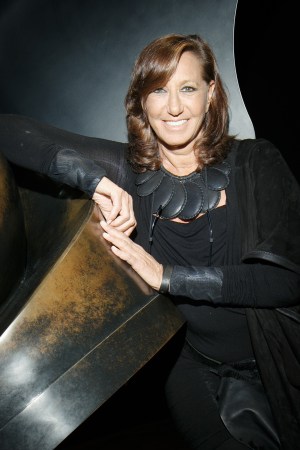 NEW YORK — No time to take a trip around the world before Christmas? Donna Karan has done the work for you. On Friday, Karan opened the third annual Soulful Economy Marketplace at the Urban Zen Center here, assembling handmade crafts, jewelry, artwork, clothing and toys from designers worldwide. The marketplace will stay open until mid-January.

Karan gave a tour of the marketplace at 711 Greenwich Street on Thursday afternoon pointing out many of her favorite treasures. “I chose everything and worked with all the artisans,” she said.

The marketplace features such items as handmade pottery, candlesticks, chess boards, metal framed sculptures and recycled rubble art from Haiti; yoga bags, handcrafted sculptures, tabletop items and candles from Bali; Christmas ornaments from the Philippines; hand-carved wooden toys from TriBeCa; pottery from Thailand; colorful clutches from India; bracelets, belts and jewelry from Brooklyn; cashmere scarves from Tibet and Nepal, as well as the “Not One More” leather bracelets for gun control.

With every purchase, Urban Zen will give back 10 percent of net proceeds to the Urban Zen Foundation, which Karan created in 2007 to help preserve artisan cultures around the world and provide vocational education. One hundred percent of the proceeds from the Haitian artwork and crafts sold goes back to the Haitian artisans.

This year, the Urban Zen Foundation teamed up with The New School’s Parsons School of Design for its D.O.T. (Design, Organization, Training Center) program in Port-au-Prince, Haiti. Karan selected four graduates to spend the summer in Haiti, working with the artisans in developing products. Karan went to Haiti three times this summer to work with them. The graduates had studied product development, textiles, architecture and interior design at Parsons, and created many of the home decor products that are for sale. “They didn’t want to leave,” Karan said. “It opens up your mind to a whole other world, and what artisans work is really all about.”

The marketplace also houses a selection of books and apparel. “My dream is to have it as a permanent store,” she said. The companies featured at the marketplace include Aloha, Bottletop Handbags, Brave Jewelry, The Elk, Art by Evan Yee, From the Road, Grassroots, Haitian Hearts, Jason Ross, Mediation Cushions, Nomad, Playing Mantis, Salt Sunglasses and Wagwear.

Attached to the marketplace is Karan’s Urban Zen store featuring her luxury collection of knits, dresses, suede jackets, pants and coats. “All the Donna Karan customers are coming here,” said Karan, noting that Urban Zen collection is priced at the same level as her Donna Karan Collection was. There are cashmere knits, retailing from $695 to $1,695; a suede classic blazer at $1,495, and a body-sculpted dress with cashmere panels for $1,395. “I love the jumpsuit,” Karan said. “White has been selling really well. People are getting into white for winter.”

She also likes the tweed sweaters. “That’s the beauty of this. We have the [fall] clothes in stock. Most people are into resort and spring already. We have constant replenishment,” said Karan, pointing to her favorite top, a white viscose jersey scoop neck style for $695. “It’s selling like crazy.

“Everybody is finally loving the belt bag,” she added. “It frees up your hands.” The shearling belt bag retails for $1,095. She also pointed to a slinky dress on the mannequin, retailing for $1,295. “It’s not the easiest dress to get into, but once you’re in, it holds you in completely,” said the designer.

Karan said her goal is to keep Urban Zen “a nice business and under control.” What she wants to do is talk to the customer and show the clothing in-season. Karan plans to reopen her Urban Zen store in Aspen on Dec. 18. Presently she has stores in New York and Sag Harbor. “Hopefully we’ll open Los Angeles again.”

Karan has just returned from a trip to California, where she attended Tina Brown’s “Women of Impact” conference and did book signings for her new memoir, “My Journey,” in Los Angeles, Montecito and Santa Barbara. Her next stop is a book signing in Sag Harbor, N.Y., on Nov. 28.