The designer is to handle artistic direction, with Chanel studio head Virginie Viard as president of the fashion jury. 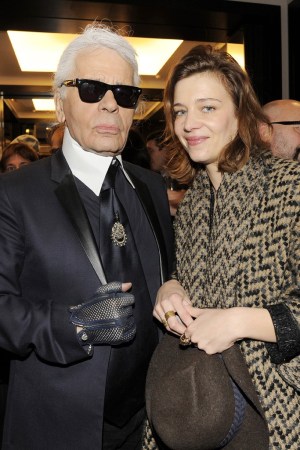 PARIS — Karl Lagerfeld and key members of his extended creative gang at Chanel are to headline the 30th edition of the International Festival of Fashion and Photography, scheduled for April 23 to 27 in Hyères, France.

Lagerfeld also roped in high-profile members of his inner circle, including Princess Caroline of Hanover and actress Anna Mouglalis for the fashion jury and actress Cécile Cassel and art dealer Kamel Mennour for the photography panel.

The festival has been a crucial launchpad for many fashion designers, with Viktor & Rolf, Christian Wijnants and Anthony Vaccarello among previous laureates, with Vaccarello doing jury duty this year.

Festival director Jean-Pierre Blanc hosted a press conference at 31 Rue Cambon on Wednesday night to announce the complete lineup, including the finalists for each of the main prizes.

Photos and outfits from each contender were displayed at Chanel’s couture salons, packed with revelers as couture week entered the home stretch.

Earlier in the day, Viard and Pfrunder had met with their respective juries to whittle down 20 finalists out of 100 who were short-listed from more than 1,000 entries.

Last year, Chanel became a major partner of the festival, and the principal sponsor of a permanent exhibition there about art patrons Charles and Marie-Laure de Noailles, who tapped architect Robert Mallet-Stevens to build the Villa Noailles in the Twenties. Lagerfeld has long been a fan of the modernist mansion.