In the guise of a nimble Tokidoki cartoon, the designer taunts players to try and remove his sunglasses with the click of a mouse. 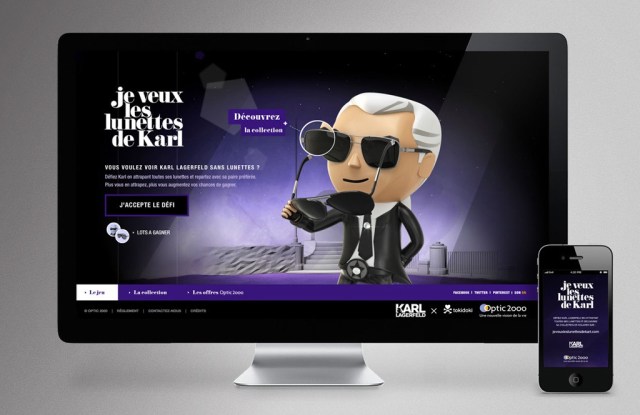 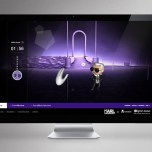 PARIS — Karl Lagerfeld is back in a video game — this time, in the guise of a nimble Tokidoki cartoon, taunting players to try and remove his sunglasses with the click of a mouse.

It’s a monthlong digital initiative in partnership with Optic 2000, Lagerfeld’s exclusive eyewear distributor in France, which sells about 100,000 of his signature optical eyeglasses and sunglasses a year.

The 1,200-unit chain boasts a 13 percent share of the optical retail market in France, and said Karl Lagerfeld eyewear, produced under license by Marchon Eyewear Inc., sells an above-average ratio of sunglasses versus optical frames: 52 percent, versus a norm for designer frames of around 45 percent.

RELATED VIDEO: Click Here for a Teaser of the Game >>

Cue the video game, whose conceit is that the fashion designer is never seen without his dark glasses — and good luck plucking them off his face, achieved by clicking on a fast-moving target.

Move too slowly and he’ll tap his foot impatiently, or whip out a camera and snap photos — all the while spewing admonishments.

“You really need glasses,” goes one.

“Ah, you finally woke up,” goes another.

The final insult comes if you fail at the game entirely. “Karl has no more time for you,” he huffs, tongue-in-cheek.

Only French residents can claim prizes, but anyone with a computer or smartphone can try their luck at jeveuxleslunettesdekarl.com.

Developed by the agency Buzzman, the site also showcases Lagerfeld’s latest eyewear collections, which can be purchased on the e-store of Optic 2000, launched in 2012.

Lagerfeld, who is Chanel’s couturier and the designer of ready-to-wear and fur at Fendi, appeared in the game Grand Theft Audio in 2008.