The decor has been inspired by Karl Lagerfeld’s personal home and studio. 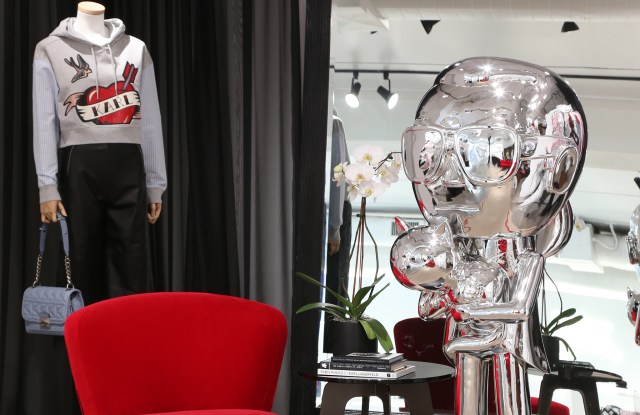 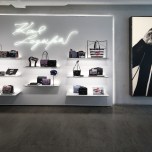 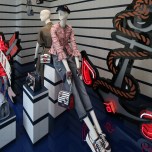 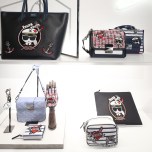 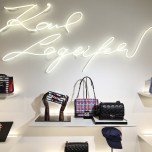 Karl Lagerfeld is ready to take SoHo by storm.

On Saturday, the Karl Lagerfeld brand will open its first U.S. store at 420 West Broadway in New York, which features a mix of Lagerfeld’s European collection and Karl Lagerfeld Paris, which is a joint venture with G-III Apparel Group.

“The moment seems to be right and the space is great,” Lagerfeld told WWD. He noted that distribution of his signature brand, re-launched in the burgeoning masstige category in 2012, first put down retail roots in Europe and then China. “Our first tests in the U.S. were great.”

Inspired by the designer’s personal home and studio, the 3,230-square-foot store has a sophisticated yet inviting, open feel. Each of the furnishings has an unusual story behind it, from antique mirrors to velvet chairs and luxurious marble finishes to the giant Tokidoki silver cartoon sculpture of Lagerfeld — with a ponytail — holding his famous feline, Choupette. A bespoke carpet has a red border around its edges, similar to the border that the designer draws on all of his sketches. A full-size photograph of Lagerfeld, wearing fingerless gloves and chains, and taking a photo with his camera, greets visitors at the entrance.

One highlight is a library wall inspired by the library in Lagerfeld’s studio, where he houses a part of his collection of more than 300,000 books. On display are such books as “Helmut Newton,” “Renoir,” “Streisand,” and “Chagall,” which aren’t for sale, while some of the books about the designer’s life are available for purchase.

“Opening the first Karl Lagerfeld store in the U.S. is an exciting milestone in our brand’s continued global growth,” said Pier Paolo Righi, chief executive officer of Karl Lagerfeld. “New York City is an international fashion capital with a modern spirit and energy that make it the ideal setting for our new flagship. With our West Broadway location, we can invite our consumers to immerse themselves in the complete Karl Lagerfeld retail experience and continue to build meaningful connections with them.”

The flagship will showcase Karl Lagerfeld and Karl Lagerfeld Paris ready-to-wear for women and men, in addition to accessories and footwear. Among the special features are the Karl Ikonik collection, which highlights playful graphics of the designer’s iconic character and Choupette. The whimsical offering includes luggage, tote bags, sunglasses, canvas bags, wallets, watches and sneakers. There’s also a Kaptain Karl section that has a more nautical feel with jeans with patches, tweed jackets, “Karl” T-shirts, and blue leather jackets. A Yoni Alter x Lagerfeld collaboration offers colorful, modern pieces of rtw and accessories, including patches on skirts, denim and jackets. Jeans are $265, while an allover silk print dress is $385.

The store will also serve as the launch pad for the Karl Lagerfeld + ModelCo color cosmetics collection, which has been developed in collaboration with the Australian beauty brand.

Throughout the year, the store will add new collections such as Karl Lagerfeld x Kaia, designed in collaboration with 16-year-old model and “It” girl Kaia Gerber, which will launch in September. The rtw and accessories designs, which include footwear, sunglasses and jewelry, will have a West Coast meets Left Bank sensibility. The Karl Lagerfeld x Kaia collection will launch globally in Lagerfeld stores, online at karl.com and select wholesale partners. The collection is aimed at the Millennial customer, who’s socially connected and travels.

On a walk-through Thursday, where staff was putting the finishing touches on the store, one could see that the more elevated Karl Lagerfeld collection, which is available globally, is featured in the front, while the middle to back of the store spotlights Karl Lagerfeld Paris and men’s wear. (The store runs the length of West Broadway to Thompson Street.) Original Lagerfeld sketches are displayed throughout the store. At the entrance are handbags and accessories under the Karl Lagerfeld banner. Day bags, including cross body bags with top handles and Plexiglass novelty clutches, are on display, as well as a few bags in the shape of Choupette, with leather ears popping off the bag. Lagerfeld’s fingerless gloves, some with chain embellishments, pearl embellishments and grommets, are featured prominently throughout the store. There are separate footwear areas, featuring sandals, sneakers, slides and high heels from both labels.

Among the looks are Karl Lagerfeld tweed dresses for $525, a pink baseball jacket for $465 and a trenchcoat for $525, while the Karl Lagerfeld Paris section offers tweed jackets for $99.50, a pink dress with pearl button sleeves for $168 and blouses for $89.50.

The flagship’s opening will include exclusive events and activations viewable at @karllagerfeld and #karllagerfeld.

In a WWD interview in January, Righi discussed the warm, home feeling of the new store format, as opposed to a sleek, black and white, cool feeling of Lagerfeld stores from six years ago. “Our new store format plays a lot with Instagrammable moments and places, so we really have dedicated spaces where you, as a consumer, can clearly connect with that Karl world and make it seen,” Righi said at the time.

Opening more stores has been a key initiative for the brand. Last year, the company opened 10 to 11 stores. Among the new ones were two stores in China: one at the Beijing Oriental Plaza and the other at the Starlight Plaza in Chongqing. Last October, it opened a store in Vienna and another in Jeddah at the Red Sea Mall.

Last month, Lagerfeld opened its first freestanding women’s store in Moscow at the Metropolis Shopping Mall, one of the city’s best-known shopping centers, featuring Lagerfeld’s updated retail concept. The store showcases Lagerfeld women’s rtw, footwear and accessories with a focus on bags. In February, Lagerfeld opened a pop-up shop at the Breuninger department store in Stuttgart, Germany. It will be open through the end of this month. Other new Lagerfeld stores this spring are at the Mall of the Emirates and Dubai Mall.

It’s been a busy year for the Lagerfeld brand. Earlier this year, the company revealed it was merging its two men’s wear lines, with a collection unveiled at Pitti Uomo; launching a capsule collection with Sébastien Jondeau, Lagerfeld’s  personal assistant and bodyguard, and signed a denim license with Italy’s Giada SpA.

Excluding the U.S., the Lagerfeld brand looks to grow by 30 percent this year, following a 30 percent increase last year and 16 percent increase in retail sales, as reported. “That’s overall revenue growth without counting the U.S. If I were to count the U.S., the growth would have been even bigger,” Righi said in the January interview. Citing Lagerfeld’s  joint venture in the U.S. with G-III, he said, “Basically in that joint venture, we also have several licenses and are getting a royalty out of that.”