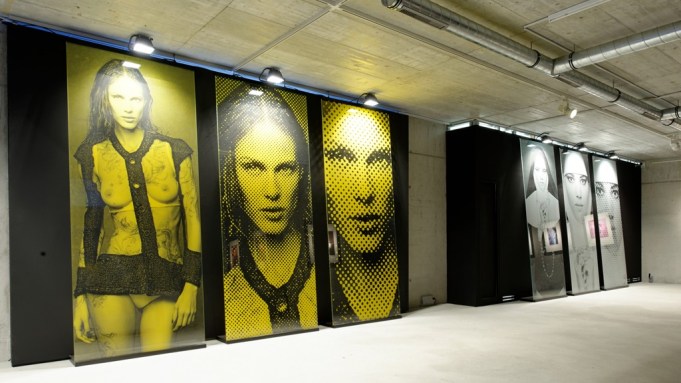 As enamored as Karl Lagerfeld is with paper, he flirts with one of its chief enemies in his latest photo exhibition.

Titled “Fire Etchings,” it opens today at the Galerie Gmurzynska in Saint Moritz, Switzerland, and features images of rapper Theophilus London and models Freja Beha Erichsen and Aymeline Valade that have been etched onto the surface of giant glass panels with acid and fire.

Projecting an ancient art form — portraiture — into the future via cutting-edge printing is pure Lagerfeld, according to Mathias Rastorfer, co-owner of Galerie Gmurzynska, which boasts three locations in Switzerland and has represented the fashion designer for 20 years.

“He’s always been very interested in how you can push the boundaries of technical possibility,” Rastorfer said.

To emphasize that point, the exhibition juxtaposes the fire etchings with a series of delicate 1996 portraits by Lagerfeld on handmade paper that revived a forgotten technique from early photography: color-tinting black-and-white images via a process involving honey and rubber.

Lagerfeld said Gerhard Steidl found the one place in Germany capable of the etchings, a process usually reserved for stained-glass windows in churches.

“It was never done that way for screen-printed photographs on glass and burned in,” the designer said. “The effect is great for portraits, and I will do more and more of it.”

Rastorfer said appreciation for Lagerfeld’s photography has been steadily increasing among art collectors, reflected in the five-figure price tags. A one-of-a-kind triptych in large glass panels is priced at 300,000 euros, or $401,650 at current exchange.

Portraits, architecture and forms of abstraction are common threads across Lagerfeld’s photography.

But what initially caught Rastorfer’s attention and captivates collectors still is Lagerfeld’s devotion to aesthetics — which went against the artistic grain when he first picked up a camera in the Eighties; his knowledge of art history, particularly in the 20th century, and his fluid approach to fine, applied and decorative arts, which he shares with figures from the Russian avant-garde like Kazimir Malevich.

Lagerfeld’s day job as a fashion designer has also served him well, with its on-to-the-next rhythm. “He will never talk to you about the past. It’s always the next project he’s interested in,” Rastorfer said.

“Nothing is more exciting than something new — a new material, a new spirit, a new technique, a new point of view, a new expression, a new feeling,” Lagerfeld concurred. “That’s right for fashion and for photography.”