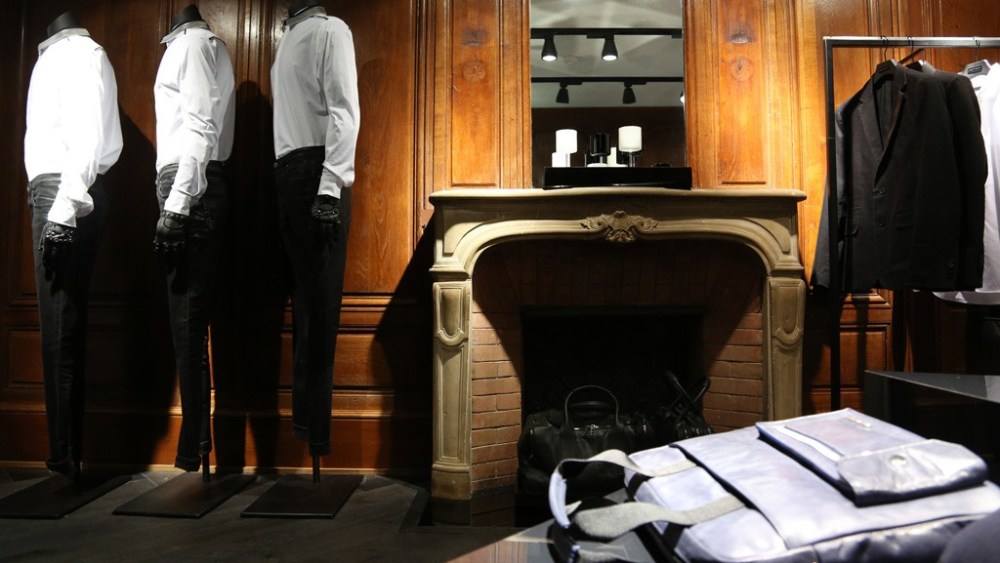 PARIS — Thrusting his signature brand back onto the global retail stage, Karl Lagerfeld has created a sleek, high-tech showcase in Paris for his creative output, from clothing and accessories to photo books and gadgets.

And it’s only the first volley in an ambitious rollout that has the potential to grow to 100 stores worldwide, according to Pier Paolo Righi, chief executive officer at Lagerfeld.

In an interview, Righi said a second Paris unit is slated to open on Rue Vieille du Temple in the trendy Marais district of Paris this spring, with a location in Amsterdam’s Negen Straatjes, or “Nine Little Streets,” neighborhood to follow soon after.

All told, the company should end the year with seven to 10 Karl Lagerfeld boutiques in Europe, with London among priority cities and Germany among top-of-mind countries.

Righi also hinted he would embark on a “significant” retail push into China, starting this year.

The 2,150-square-foot Paris unit is slated to open to the public on Friday during fashion week with a preview of the designer’s fall collections and the chance to place preorders. (Spring merchandise will take over Monday.)

The boutique — in various shades and textures of black and white, from rustic to gleaming — reflects Lagerfeld’s graphic, rock ’n’ roll-tinged approach to fashion, and signals how majority owner Apax Partners is angling to build the Lagerfeld business to a scale matching the designer’s fashion reputation.

Starting with fall 2013, the ready-to-wear lines will be united under the Karl Lagerfeld label, spanning entry-level items such as T-shirts bearing the designer’s famous, sunglass-wearing likeness to luxurious eveningwear for women and men, Righi noted.

The accessories category, particularly bags, has been expanded and broadened, with almost five times as many stockkeeping units for fall 2013, he added.

While high-profile retailers including Selfridges and Harrods in London and Galeries Lafayette carry certain Lagerfeld lines, the new boutiques will assemble the entire portfolio of products.

Handbags are front-and-center as soon as shoppers cross the threshold at 194 Boulevard Saint-Germain and step onto hardwood floors stained a charcoal shade. Black leather totes traced with zippers in “K” formation and midsize, bicolored Bowletto bags are displayed on individual shelves jutting out from backlit walls in powdery Corian, a material usually found in high-end kitchens and bathrooms.

The second room is a showcase for a new watch collection by Fossil, with women’s rtw in a spacious back salon punctuated with a floor-to-ceiling video wall. Upstairs is another trio of rooms: one featuring footwear and small leather goods, one dedicated to black and white evening attire for women and men, and one for men’s, including the Lagerfeld line, licensed to Miltenberg, Germany-based F.D. Fashion Herrenmode GmbH.

Interspersed are products from Lagerfeld’s far-flung collaborations — Shu Uemura makeup here, crystal glassware by Sweden’s Orrefors there — along with selections of books from his 7L bookshop on nearby Rue de Lille, funky key chains and Tokidoki figurines, including an all-black one exclusive to the store in a limited edition of 150.

Given the Lagerfeld brand’s strong online presence, the store is outfitted with iPads galore. They function as digital look books above racks of clothes; as guest books where clients can surf the brand’s Web site and leave a note for the designer, and as a companion in fitting rooms for sharing photos of outfits on Facebook, Twitter or e-mail. As in Apple stores, payments are processed on mobile devices.

An opening party tonight, hosted by Lagerfeld, is to be live-streamed on karl.com and the brand’s Facebook page. Three cameras are slated to give a bird’s-eye view of the editors and VIPs in attendance, and the designer himself. Virtual guests can also pose questions on a Twitter wall.