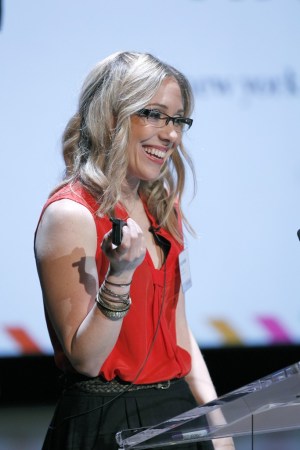 Kate Spade New York made sure to have the holiday season all wrapped up, and in doing so that helped hike last year’s e-commerce sales by 11 percent.

That was one of the many upsides spelled out by senior vice president of marketing Kyle Andrew and Web art director Marissa Kraxberger. With commercials, blogs, photographs of window displays, animated gifts and other colorful visuals, the duo illustrated how the brand brought their “Wrap! Unwrap!” holiday ad campaign to life. The aim was to be innovative, drive traffic to the company’s Web site and do so on a limited budget, they said. The all-out marketing effort not only spiked online traffic in the fourth quarter but it helped boost its database by 17 percent, they said.

To bring the campaign to life during the holidays, Kate Spade offered shoppers in its New York stores free rides in multicolored “wrapped” New York City taxis. Visitors to the Web site could read about staffers’ picks for a hot cocoa crawl, download holiday wrapping paper or try to win a daily gift card, among other things. Tie-ins via social media furthered the company’s connection to shoppers, resulting in 27,000 Facebook fans in one day and bolstering its Tumblr followers.

For the most part, Kate Spade’s creative is consistent around the world, although the occasional tweak is needed depending on the audience. As the company works closely with global partners, executives have learned that sometimes the brand’s “witty little sayings aren’t so witty internationally,” Kraxberger said.

As is the case with all of its digital efforts, Kate Spade uses its blog, Facebook page and e-mail alerts as a way to bring its consumer community closer together “while still keeping shopping in mind,” Andrew said.