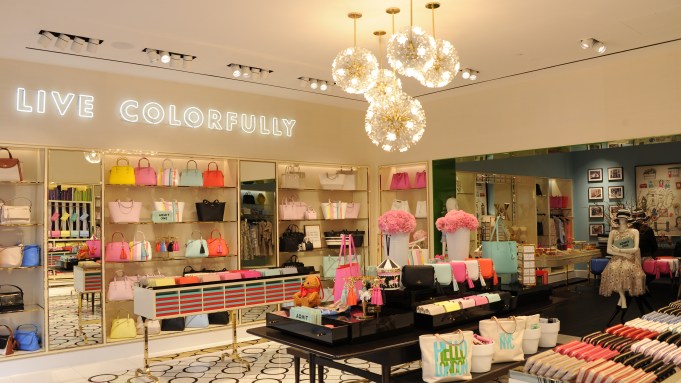 LONDON — America’s fashion brands continue to land on London’s Regent Street with a bang, and the latest one to open a new store is Kate Spade New York.

The new store, located at 178-182 Regent Street, is the brand’s largest London unit at 4,000 square feet, on two floors. There are Kate Spade New York stores in Covent Garden, Sloane Square and the Westfield shopping mall, but the company’s principals see the Regent Street store in a different light.

It’s been designed to offer a full immersion in the brand and showcase all of the categories, including the children’s and home collections. There are also a few design touches that harmonize with the store’s location on the popular, upscale shopping thoroughfare.

The London market has been a robust one for Kate Spade New York so far, and this opening was a necessary step, according to Craig Leavitt, the company’s chief executive officer.

“We’ve been growing our business in the U.K. for several years now and we’re so proud of our stores in Covent Garden, Sloane Square and Westfield,” he said during a joint interview with Deborah Lloyd, Kate Spade New York’s president and chief creative officer.

“This is really taking it to the next level, with a larger footprint and a broader assortment in the store. It’s really an opportunity for our girl to see the world of Kate Spade New York under one roof.”

He said Regent Street is becoming “a real magnet” for U.K. tourists from outside of London, but also for European and international tourists. “That’s why we’re so excited, we’re going to have a lot more exposure to the customer who’s looking for us, and who maybe knows our brand. This is an opportunity to shop it in London while she’s traveling, particularly that consumer who is from Continental Europe, where we’re just beginning our expansion,” he said.

The space has a rich, residential feel, and is filled with furniture — garden and otherwise — while jewelry is displayed on what looks like a grand dressing table in a socialite’s private quarters. The decor is typically, eye-poppingly bright, with signature Kate Spade New York touches, and a dashes of local color, too. Toy black cabs and bright red double-decker buses adorn shelves, while in the children’s area, stuffed animals wearing party hats sit at a little table ready to have tea and cake.

There’s a wall with delicate neon signs spelling out hello in seven languages, and cheeky nods to Brit-speak. Some walls are adorned with sentences that play on the ways that Brits and Americans express themselves: “She lets her e-mails pile up, but never forgets to call (ring) her grandmother for a chat (chin wag).

The New York-based Lloyd, who is British and still has family in the U.K., clearly could not resist the jokes. “You see the wit coming through in those little ‘lost in translation’ moments that talk about the language difference between saying something in the U.K. and saying something in the U.S. They’re quite funny, and an example of what I have to go through every day,” she said.

“It really is a meeting of the cultures there,” she said, adding that she was happy to see “a whole setup for the children’s world, and use more of our furniture as display pieces so people can see it.”

The store is also stocking a “Hello, London” tote as an exclusive and Lloyd said more products will be unveiled closer to the time of the official launch on April 21. Lloyd and Jourdan Dunn will be hosting a party that night featuring an edible installation in collaboration with the New York-based artist Jennifer Rubell.

Leavitt said the store is part of a big international push, which will be an avenue for growth over the next few years. The company entered eight new markets last year, including Latin America and countries such as Chile, Peru, Panama and the Caribbean. Last year Kate Spade New York also opened 50 points of distribution in Europe, most of which was wholesale, in places such as France and Scandinavia.

The brand is looking for a store in France, and exploring other countries as well.

Although he did not provide first-year sales projections, Leavitt said London, and the U.K. generally, has been one of the brand’s important growth areas, with one of the highest regional comparative store results of anywhere in the world. “We’re really excited about that foundation and our e-commerce business, which we launched last year and which has seen very exciting growth as well and really exceeded our expectations for 2015.”

Kate Spade New York is the latest American brand to arrive on Regent Street: Polo Ralph Lauren is set to open a 17,550-square-foot flagship this summer, on the corner of New Burlington Street. It will be the first Polo unit in the U.K. and the second in Europe after Rome, which carries men’s wear only. J. Crew, Brooks Brothers and Tommy Hilfiger are among longtime residents of the street, which is owned and operated in large part by British property company the Crown Estate.