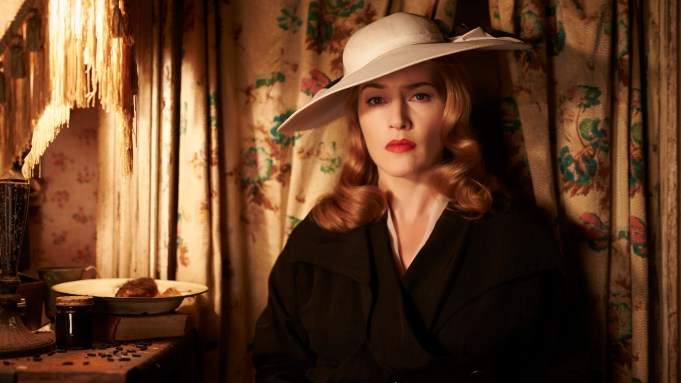 “Is that Dior?” Kate Winslet’s character Tilly Dunnage is asked in the opening scene of “The Dressmaker,” in theaters on Sept. 23. And so begins the quirky, campy Australian dramedy that puts clothing front and center while paying homage to the art of couture.

“It was a costume designer’s dream,” said Marion Boyce, one of the film’s two designers. Her colleague Margot Wilson agreed, “A film describing your job doesn’t come along very often.”

The Jocelyn Moorhouse-directed film is based on a novel by Rosalie Ham about a small-town murder mystery set in Fifties Australia. In it, Winslet’s Tilly, who once worked with Madame Vionnet and Cristobal Balenciaga, attempts to woo the community by creating garments for them, all while wearing one stunning ensemble after another.

“She needed to look incongruous to the rest of the town,” Wilson said of creating 25 form-fitting pieces from taffetas, silks and cottons, all custom-made including Winslet’s underwear, bras and corsetry. “But it would have looked too ridiculous to have Kate waltzing in wearing an extravagant Balenciaga gown. We still had to make her look real and appealing to the audience.”

One standout moment features a vibrant red dress made from a silk moire taffeta that Wilson purchased 25 years ago in Milan. “I’d kept it and was waiting for an opportunity to use it,” she said. “It was such a beautiful fabric. I didn’t want to waste it on a small part.”

Having collaborated previously with Winslet on the drama “Triple Nine,” released earlier this year, Wilson said the Oscar winner is “collaborative” and “generous with her time.” “While she’s not a method actor, Kate embarked on a sewing course before she came to Australia, so that she could relate to the character and understand the terminology,” Wilson shared. “That was good because, when I was talking to the cutters and when I was doing fittings, Kate had a sense of what we were trying to achieve. She watched us very closely. She listened.”

Meanwhile, Boyce outfitted the rest of the cast, which includes Liam Hemsworth as a local framer and Tilly’s love interest, Judy Davis as Tilly’s invalid mother, Hugo Weaving as a cross-dressing sergeant, and Sarah Snook as a shop girl.

“There was an enormous amount of variation because you had a lot of crazy worlds colliding,” Boyce said, adding that the rural town’s neutral palette provided an additional challenge as she designed 2,000 costumes for the cast and extras.

“I initially didn’t quite know how to put the clothes in that landscape. The idea of having couture running around this town with high heels and hats and handbags was quite an extreme.” The costume designer drew inspiration from photographers Richard Avedon and Irving Penn before settling on looks made of crisp organzas and duchesse satins sourced from Rome, India, and all over the world. “Reimagining the period was the hardest part,” said Boyce, though she relished the challenge. “You don’t want to copy a designer. You want people to see new and exciting things that fit into the period.”