The outdoor exhibit is part of the museum's initiative with Far Rockaway. 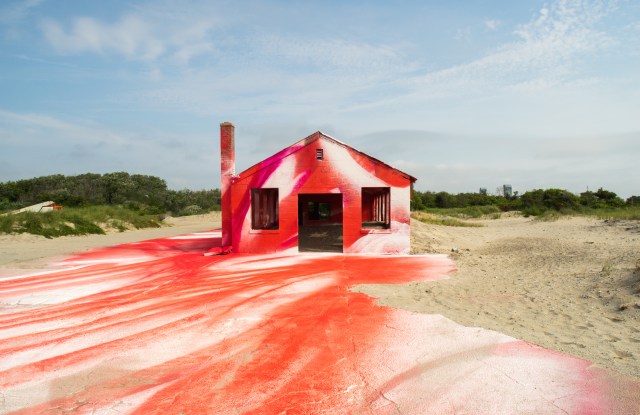 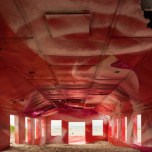 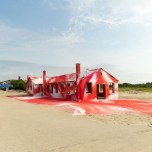 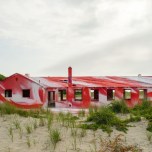 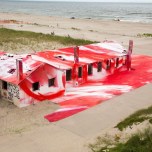 Like many New Yorkers during summertime, MoMA PS1 has decamped to the beach for its ongoing “Rockaway!” public arts initiative in collaboration with the Rockaway Artists Alliance. This year, the museum’s director, Klaus Biesenbach, tapped German artist Katharina Grosse to create a site-specific work at Fort Tilden, using the former U.S. Army Coast Artillery Post‘s abandoned aquatics building as her canvas. Known for her large-scale work with spray paint, Grosse transformed the building into a brightly colored spectacle.

WWD caught up with the artist a few days before the exhibit’s official unveiling, to talk about the project.

WWD: How did you link up with PS1 for this project?

Katharina Grosse: Klaus Biesenbach approached me about three or four months ago, and he had that specific site in mind, and somehow connected it with my way of painting.

WWD: Did you choose the Fort Tilden location yourself?

K.G.: [Biesenbach] did. He had that in mind — he was totally fascinated by that location.

WWD: Did you choose the specific building?

K.G.: He was thinking of that building and that area. And then I built a model. I thought about it a little while, and then I tried things out and decided to go for it.

WWD: How does color selection play a role in your work?

K.G.: I chose those three reds and the white because they stand out in that site. There was only the blue sky and the sand. The green, for example, from the shrubs, the orange and the red totally glow in that environment.

WWD: The buildings at Fort Tilden are heavily spray painted. Did you get any reaction from the artists who had already been there?

K.G.: Not yet. But I thought that people were very curious and anticipating my work.

WWD: Do you think there’s a possibility that your work will get painted over, or modified as time goes on?

WWD: What do you want viewers to take away from the exhibit?

K.G.: It depends on people’s mind-set. I think it’s really about presence and energy, and the ability to be confronted with the situation right now. Freedom, I think, is a very big message, and something I think could be taken away.

WWD: Did you aim to tie in any environmental issues?

K.G.: Yeah. We were in touch with the park people all the time, and they negotiated what we could do. We were very careful about protecting parts of the environment that were close to the building.

WWD: Were there any limitations?

K.G.: There were some parts of the park protected historically, so they couldn’t be a part of the project. But the buildings around it could also become part of the work.

WWD: How long did the painting process take?

WWD: Did you plan it all ahead of time, or did you leave it open to be more random as you went?

K.G.: There was a little bit of planning that was necessary, so that you have the right amount of paint. But as you’re there, at the site itself, you have to be able to scale the space with the ever-changing light situation. That’s so thrilling and exciting: You adjust yourself and [the] plans constantly as you go along. So you don’t just execute a plan — it’s a very vital, very energetic process.

WWD: How do you think this piece differs from your other work?

K.G.: It is very unique, the site. I think it already brings to the table a very strong, iconic value or feel. This deserted house by the sea — and the beach is empty, and the big sky. There is a lot of feeling we can all relate to, like for longing or deserted-ness. You get into the feeling of your own existence in a sense, by the site already, and my painting confronted with the house and the architecture and the feeling that there is all of a sudden a transformation [that] happens.

It’s been really amazing for me to do it, and I’ve done a lot of site-specific painting, and this was by far the most adventurous and the one that propelled my thinking about painting totally forward. And it was amazing to work with Klaus, who had a big curatorial impact on the work. I had an amazing team as well; people were very supportive and very curious.

WWD: How did Klaus impact the piece?

K.G.: He saw the potential of that absurd way of painting I have with that sort of remote location. It was an interesting collaboration. And he also saw the possibility of — even though it was such a remote place, the painting was so exposed. So the exposure of painting in a location like that was a strategic move. What I also really enjoyed was during the process he would really urge you to go further and push your work to another limit.