Keeping Up With Gretchen Jones

After winning “Project Runway,” the designerfaces a new reality: her first collection. 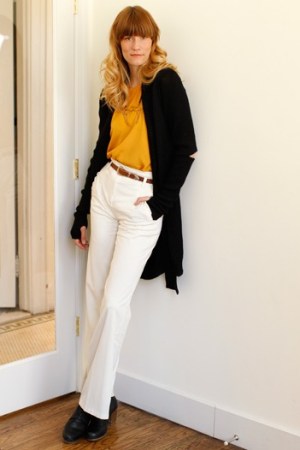 On the finale episode of last season’s “Project Runway,” Gretchen Jones told the judges — Michael Kors, Nina Garcia, Heidi Klum and guest Jessica Simpson — that she “could immediately make [them] proud” if she won. After weeks and weeks of improbable challenges and high-drama spats, this was it. Jones, along with fellow finalists Mondo Guerra and Andy South, had just presented their collections at New York Fashion Week. They were lined up, as usual, in some oversize room at Parsons The New School for Design, facing a barrage of critiques. “Why do you think you should be the winner?” was the question Klum lobbed at all three. Jones, with her model to her right, continued, “The next step after ‘Project Runway’ is getting people in my clothing, and I need help to do that.”

The rest is reality television history. Jones won — and kept her word. Two weeks after the finale aired in October, the Colorado native, who most recently called Portland, Ore., home, packed her bags and moved to New York to work on her debut fall collection, which she has just unveiled: a 21-look lineup of Boho-meets-city-chic wears that have been snapped up by Steven Alan and TG-170 in New York, Frances May in Portland and Tobi.com. Jones is simultaneously launching a second collection: a line of bronze and silver jewelry that, like the clothes, strikes the Southwestern-light vibe she showcased on TV. “My plan was always to move swiftly and with intention right from ‘Project Runway’ into the industry,” says Jones, 29, in that no-nonsense, decisive tone for which she became known, and often ridiculed. “The show was the platform I needed to launch. If I hadn’t won, I would have still done this. I definitely always had it in me.”

Throughout the Lifetime series, Jones came across as intense, sometimes smug, and was typecast as, well, the bitch. With Guerra the fan favorite and assumed shoo-in, her ultimate win sparked a blistering controversy. “You could almost hear the collective groaning and swearing across America when Gretchen Jones was announced as the winner,” wrote one blogger. But in person, Jones is rather approachable and — dare we say it? — pretty nice. “No tomatoes have been thrown at me,” she laughs when asked if people recognize her on the street. “I think winning those first two episodes put my first foot in the grave. How do you not hate the person who won the first two? You either love her or you hate her, and, unfortunately, that was me.”

Which isn’t to say the designer is making excuses (“I have a strong opinion and I spoke honestly”), yet when reruns air, she admittedly channel surfs right by. “I don’t enjoy watching. It’s really not who I am,” she says. “But I also think you have to have a tough skin in this industry. You know, as a designer, [the fashion press] might not like one of your collections — that’s the risk of the game.”

Jones’ approach to “Project Runway” was always a singular one, which may have been part of the reason why her celluloid alter ego came off as calculating and overly driven: It was all a business strategy. “It’s a competitive market out there. How do you get yourself in the door and reach people?” she asks. “I didn’t go on to become famous, I went on to get the exposure. The show typically got about 3 million viewers. If 10 percent of those people liked my aesthetics, that’s thousands more than I was able to reach before. I’m just a girl trying to make it in this industry.” And, yes, she’s fully aware that being such a contentious character helped. “It probably tripled the amount of exposure,” Jones adds. “If I was just the nice girl, you wouldn’t be talking about me.”

But bitchiness — “confidence,” corrects Jones — is only half of her villain-in-the-making formula. “Project Runway” has always had those opinionated types in spades. Santino Rice, for instance, the stock antagonist of season two, has parlayed his acerbic tongue into a judging gig on “RuPaul’s Drag Race.” What riled Jones’ detractors more was her real-world — make that wearable — sensibility. As Kors, who voted for Jones but declined to comment for this story, said during judging, “The problem with reality-based clothes is that they can be really a snooze on the runway.” It says a lot about television’s take on the industry. Guerra, with his edgy hairdos and even edgier designs, probably better fit the pop-culture mold of what a fashion designer should be. Just think of season four winner Christian Siriano, he of the Spiegel and Payless ShoeSource collaborations, who had the punchy one-liners and personality with capital P.

To Jones’ credit, she never laid claim to being anything other than a commercial designer. “I’m not reinventing the wheel,” she says. “I don’t want to just make clothes that look good on the runway. I want women to wear me every day, not just for special occasions. I look at fashion as a way for me to be creative and express myself, but I also really want to sell.”

Which is one reason why Marie Claire fashion director Garcia also cast her vote for Jones. (Klum and Simpson, on the other hand, were staunch Guerra fans.) “I don’t think that ‘commercial’ as a sensibility is a hindrance,” Garcia writes via e-mail. “All that really matters is whether or not the designer can make clothes that speak to the customer and their lives. [Gretchen’s] designs were thoughtful and right for a modern woman.”

Steven Alan, who’s selling her collection on consignment, notes that Jones was “more mature” and “serious” than other young designers he has met. “I thought she had some good ideas,” he says. “A lot of times they want, more than anything, to be famous, and that’s usually dangerous. They’ll do things for the sake of fame that are not necessarily good for business.”

The pressure is certainly on for Jones. “Project Runway” ’s track record of success isn’t exactly in “American Idol” territory. Its winners have a long way to go before they can lose that reality TV tag and still be recognized. “How to capitalize on the show,” says Jones, “is what I think is the trickiest part.” She points out that it’s one thing to become a celebrity designer and another to be a successful one who is taken seriously. Postwin, Jones admits she wasn’t exactly flooded with offers. “I was anticipating to be more bombarded with quote-unquote opportunity,” says Jones, who is still looking for an investor. “It’s actually been quieter than I was expecting.” Meanwhile, the offers she has received skew toward the gimmicky. “What I’ve been approached about the most is being an advocate for small towns,” she says. “They’re about appearances and stuff, not necessarily the craft.”

As someone who’s already launched and lost her own label — Moth Love, a collection of sustainable, romantic clothes she introduced in 2008 and shuttered in 2010 — Jones might have a more realistic take on the industry. Even before that, she cycled through a slew of other jobs: model in Denver; consignment store manager in Boulder; stints with Portland-based bridal designer Elizabeth Dye and leather accessories line Entermodal. Aside from a brief flirtation with architecture at the University of Colorado — Boulder (she eventually dropped out), Jones has long had her eye on fashion. This is the girl who, as a child, threw temper tantrums if her “cable-knit tights weren’t perfectly straight before preschool.”

Jones’ fall collection, which she dubs her soft launch, is in the same vein as her “Runway” finale offering. “This is a more sophisticated version of what people saw on the show — and it should be,” says Jones, whose new line includes an update on her winning jumpsuit from episode two. “It’s a new Bohemian version of American sportswear.” Cuts are relaxed and easy — simple draped tops and loose trousers, and slouchy knits inspired by Nineties’ Kurt Cobain — while the season’s Southwestern hook gives the collection, priced from $107 to $302 wholesale, its thematic touches. Jones will tell you her muse du jour was Frida Kahlo, but it really seems to be the designer herself. The arrow prints, for example, nod to the long tattoo on the back of her right arm, and the gray-scale zigzag patterns throughout allude to her love of chevron shapes. “The symbol means change,” explains Jones. “I basically lost one business, went through the show, left Portland, moved here, launched…”

As for the jewelry, Jones mined her own roots in an old mining town called Fairplay, Colo., where her father was a carpenter and a cowboy and her mother “a Midwestern girl who ran to Colorado to be a hippie and marry a cowboy.” There are pieces inspired by Native American squash blossom necklaces, more chevron graphics (on bold cuffs and pendants) and mammoth rings featuring thick African porcupine quills. Jones adds that she grew up with “pocketfuls of pyrite,” ­thus her box-shaped pendants and rings are filled pyrite fragments. “It’s everywhere,” she says. “You find it playing in the mountains, walking around. You know, I was a businesswoman when I was a little girl, so I had plans ready to deal out.” She’s of course joking, but the comment still underscores a bluff business savvy that may have earned her a share of haters but is working to her advantage.

“It’s been strategic. The first step is opening the door, which the show helped me do,” Jones notes. “But then you have to say hello. You have to produce. We’ll see.”