In launching her first contemporary fashion line, Osbourne is managing the media she knows best: television and the Internet. 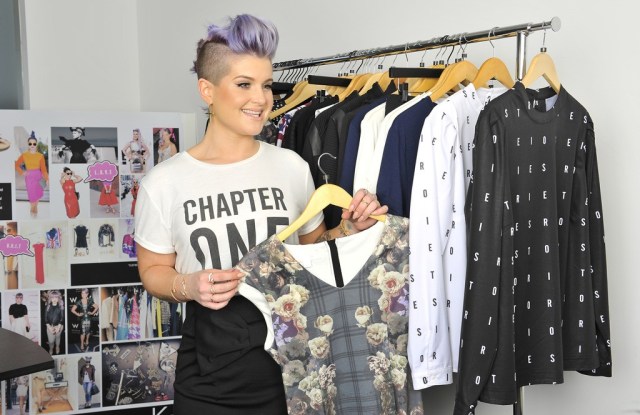 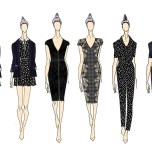 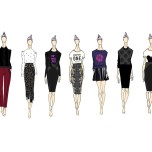 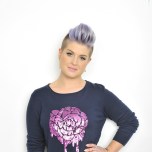 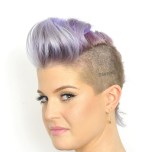 “Ohmigod — I’ve been practicing the Vanna White,” Osbourne said as she imitated the TV game-show hostess by shifting left to right in a sequined sweater and black pants with zippered pockets trimmed in fake leather from her new line.

This story first appeared in the August 18, 2014 issue of WWD. Subscribe Today.

The lavender-tressed progeny of rocker Ozzy Osbourne is getting ready to unveil 13 head-to-toe looks for Stories…By Kelly Osbourne on HSN on Sept. 25, the same day she launches a Web site where fans are welcome to share photos and anecdotes about how and where they wore her designs, which retail from $55 to $170.

“I believe that every time you wear something, you have a story of where you wore it, whether it be good or bad,” said Osbourne at the Los Angeles office of Jupi Corp., her manufacturing partner. “What made me realize this was when I was going through my closet and I was like, ‘Oh, I wore those shoes on stage every day when I was in Chicago,’ and ‘I wore that dress to my friend’s funeral,’ and, ‘Oh my gosh, I wore that skirt on a date and it still has a stain on it from where I fell off the steps because he tried to kiss me, I didn’t want to kiss him and I broke my wrist. I can’t get rid of that.’ Like, there are all these funny emotional attachments.”

Osbourne, 29, was so attached to the name of her line that she had it inked on the left side of her skull in June. She’s not the only one who likes to tell — and hear — stories. Within the first minute of posting on her new fashion brand’s Instagram account — a profile of her mohawk revealing the tattoo — she amassed 320 followers. Within two days, that number climbed to 48,000.

Osbourne also has famous friends clamoring to snag something. Taylor Swift called to check when a polka-dot dress would be available, while Ciara, who shares the same talent agent with Osbourne, requested three different items. Even her mom, “The Talk” cohost Sharon Osbourne, plans to raid her wardrobe, eyeing a black polyester chiffon blouse that closes at the neck with a rose-embossed button and removable tie.

Acknowledging that her design talent won’t rival that of Coco Chanel or Stella McCartney, Osbourne culled tips from designers such as Kim Jones and Betsey Johnson. Most of the inspiration traces back to her British upbringing and trial and error as she cultivated her offbeat style.

In Osbourne’s inaugural collection, her favorite is a black-and-white polka-dot jumpsuit, fashioned out of stretchy polyester, with sleeves that can be buttoned up. The English rose is interpreted in sequins for one viscose-cotton knit sweater and embossed on fake leather for another. The Union Jack is blown up on a drop-waist dress with a Peter Pan collar. The mélange of colors and patterns on her favorite Disneyland ride inspired a collage of tartan checks and roses covering a cap-sleeve sheath dress. A black bow can be snapped on or off a matching ponte pencil skirt that can be adjusted further with a zippered slit.

To enhance the fit and hourglass silhouettes of the ladylike looks, all the fabrics incorporate a bit of stretch, and shoulder pads and tummy-tightening panels serve as useful reinforcements. In good news for her young, cash-strapped fans, nothing, except for the ribbed cotton moto jackets trimmed with fake leather and gunmetal zippers, needs to be dry-cleaned.

“Because I have been everything from a size 0 to pretty much almost a 16, depending on the brand, it made me realize all the tricks I had learned to cover up certain areas or to detract from certain areas, and what I like in clothing,” she said, noting that she now wears a size 2 although what she calls her “big bum” pushes her to a 4.

Osbourne’s insistence to maintain control of the line and offer sizes 0 to 24 marred negotiations held over the last 12 years with 11 apparel manufacturers who were interested in partnering with her. She finally settled on Australian-based Jupi, which previously guided the Kardashians from reality TV to QVC to Sears.

“It’s not cost-effective from a manufacturer’s point of view, but it was very important for Kelly to have every shape and size,” said Bruno Schiavi, Jupi’s founder and chairman, who declined to provide sales estimates for Stories.

Added Osbourne: “It’s really unfair that America has this disillusion that the most common size is size 14, and that’s only because that’s as big as most fashion designers go.”

A month after the HSN launch, Osbourne is taking Stories to Bluefly.com, which will ship to the U.K., Latin America and other foreign markets. She’s already tinkering with a holiday collection that will replace the fall graphic Ts’ slogan of “stop and smell the roses” with a cheeky but seasonally appropriate “hoe hoe hoe.” Handbags and shoes are in the pipeline for summer with prices capped at $200. She’s also been approached to design a gown for an actress-friend for awards season and uniforms for a hotel; she declined to reveal the names.

“My collection is called Chapter One and then we’ll go onto Chapter Two as we develop,” Osbourne said. “My mission is not to be the number-one fashion designer in the world. I’m not trying to change or come up with anything that people haven’t already done. I’m just trying to make fashion fair and make good quality basics available to all women.”