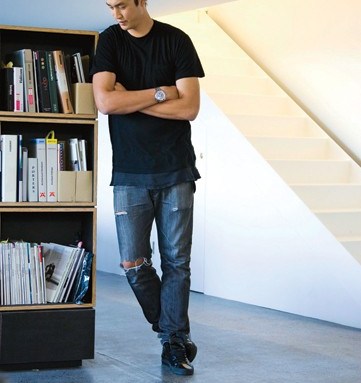 Immediately after graduating with a bachelor’s degree in architecture from Sydney University in 2003, Chinese-Australian Kelvin Ho—who speaks neither Cantonese nor Mandarin—found himself in China overseeing the construction of a major airport. Two years later, back in his native Sydney, an introduction to influential Australian fashion retailer Belinda Seper changed Ho’s destiny and he commenced work on something a little more compact: a fashion boutique. Ho was already hooked in with Sydney’s hipster elite—in 2001, the 6-foot, 6-inch surfer and skateboarder modeled in Tsubi’s (now Ksubi) nowlegendary debut Australian Fashion Week show, alongside 169 live rats. Seper has a reputation for unearthing new creative talent, and she commissioned Ho to design the second Sydney location of her hip Corner Shop concept within the heritage-listed Strand Arcade. “I wanted the next generation,” says Seper. Of Ho’s work, she notes: “It’s fresh and it’s modern and it’s original.

He puts a lot of thought into things, but he doesn’t overintellectualize it. He has very cool and new ideas, [but] doesn’t necessarily impose them on you as the client.” Seper was not the only retailer impressed by the results. In the four intervening years, Ho, now 30, has emerged as Australia’s premier independent fashion retail architect, with retail work, including some of Australia’s top fashion names, accounting for 75 percent of his business. Kelvin Ho Architects has designed a third of Seper’s 15-unit multibrand chain across Sydney, Melbourne and Brisbane. And, although Ho didn’t work on Sass & Bide’s first Australian store in Sydney’s Paddington, after designers Heidi Middleton and Sarah-Jane Clarke split from their original design firm, Landini Associates, Ho picked up the reins and did their stores in Sydney, Melbourne, Brisbane and Adelaide, building eight Sass & Bide boutiques.

Ho’s design portfolio also includes Willow’s two boutiques in Sydney and Melbourne, in addition to stores for Fleur Wood, Terry Biviano, Bassike and a showroom for Nudie Jeans. The budgets vary from as little as 100,000 Australian dollars, or $78,000 at current exchange, to up to 1 million Australian dollars, or $781,000, which usually works out to be about 2,000 Australian dollars to 3,000 Australian dollars, or $1,562 to $2,344, a square meter (or about $145 to $217 a square foot). That’s approximately one-fifth of the fit-out budget of a major international luxury brand such as Hermès for its Sydney stores. But, despite the economic downturn, which has meant fewer cold calls from the merchants Ho calls “the peripheral market—the people that are not quite Sass & Bide or Willow or Belinda,” he reports that his regular clients are doing so well, his work has not slowed down.

After a cash injection from new equity partners Daniel Besen and David Briskin, for example, Sass & Bide’s Middleton and Clarke will have doubled their Australian freestanding store tally to 10 boutiques from April to the end of this year. Having already traveled once to France to consult with Vanessa Bruno on the design of her only Australian standalone boutique in Sydney’s Paddington—a connection facilitated by Seper, who distributes Bruno’s label, Down Under—Ho now has his sights set on bagging a major international client. “I’ll always have a strong connection with traditional architecture—I really want to make sure I don’t lose sight of that,” says Ho. “But yeah, with retail, I love it. I’ll definitely continue with it. That’s my goal: to be able to work at the same level as someone like Peter Marino and work with those sorts of brands and build flagships.”