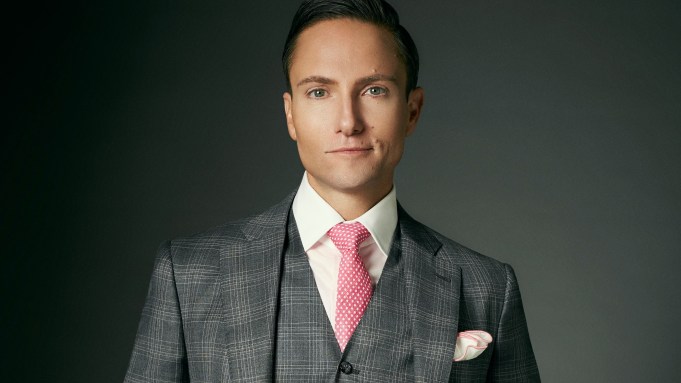 San Francisco’s resident scene-setter Ken Fulk has a full dance card this season. After designing a fashion week installation for the designers Veronica Miele Beard and Veronica Swanson Beard in September, the interior designer is pulling back the curtain on his first for-sale residential project in his hometown and toasting to his first book, “Mr. Ken Fulk’s Magical World,” with parties on both coasts.

The Harrison, in downtown San Francisco at 401 Harrison Street, is a 298-unit luxury tower that provides a downtown option for moneyed residents who perhaps haven’t graduated to a five-story mansion up the hill. It includes a private 49th floor, 3,500-foot lounge called Uncle Harry’s, which is set to open next month, but will be the site of a party to celebrate the new book on Thursday. Fulk said he designed the space, which has 100 feet of windows that look out unto the Bay Bridge and Treasure Island, to evoke both San Francisco’s past and it’s future-looking present.

Fulk has grown accustomed to crossing that divide. He works with both San Francisco’s society set (the Gettys, the Trainas), as well as tech titans (Sean Parker, Kevin Systrom). For Michael and Xochi Birch, who sold Bebo to AOL for $850 million before buying it back for $1 million five years later, he designed both their Gold Coast home and their new business venture, The Battery, a private club in San Francisco’s Financial District.

In Uncle Harry’s, Fulk’s signature is instantly recognizable: turquoise-lacquered walls; textures such as velvet, brass, black marble and distressed wood, and textiles including safari-themed chintz, vintage African Kuba cloth and crocodile-embossed leather. The ultimate host, Fulk added a double-sided fireplace in the living room, and a private dining area — catering kitchen included. Not unlike The Battery, Uncle Harry’s will host events “curated” by the tower’s concierge service, such as wine tastings, chef dinners and art lectures.

A few days before San Francisco’s party set kicked the tires of the new space, Fulk shared details about the mythical Uncle Harry.

WWD: Tell us about The Harrison. Why luxury condominiums?

Ken Fulk: It is fun, and that’s the whole idea around The Harrison. I’ve lived in San Francisco for more than two decades, and it’s a mythical, magical place to live. I thought, “Why doesn’t anyone put together these grand old apt buildings?” Like in Nob Hill, Telegraph Hill — they were exuberant and exotic, with murals — and were so much more sophisticated. The things you see today have sterile mentality, an anonymous quality, and I really wanted it to be the antithesis.

WWD: It’s a good barometer for the current tenor of San Francisco.

K.F.: San Francisco was a gateway to the east. It was interesting and sophisticated, rugged and big like the west as well. I always thought it was that sort of blend, and I wanted it to represent the new Golden Age of San Francisco. There’s a coming together of different ideas, and it’s evocative of old San Francisco and very relevant and fresh and new at the same time.

WWD: Who is Uncle Harry?

K.F.: We wanted to have the ultimate spot in the building — literally “on top of the world” of San Francisco. It’s representative of the adventurous soul in all of us, not just those who went west. It represents that pioneering idea that is very present, with the technologies that have sprung up and changed the world in the past decade. We wanted a spot that felt like it celebrated that, with worldly influences that were fun and vibrant, and that embodied in the fictional character who was Uncle Harry — a play on “The Harrison” — who is sort of grand-uncle who was bon vivant who was an explorer and representative of these new explorers.

San Francisco has its old world established society as well as this influx of amazing ideas and brainpower and forward thinking, combined with vast fortunes. Those worlds definitely collide, and that tension is where the spark happens.

WWD: It feels sometimes as if it’s experiencing perhaps a digital gold rush.

K.F.: It really is a gold rush, or a golden age. San Francisco has been a flash point on a few occasions: The world came to San Francisco for their gold rush, then there was the grooviness of the summer of love and the counterculture moment.

Now you look at a place that is a relatively small city, and ideas borne out of here have changed the way we live. It’s intoxicating to live in a place where so much is happening.

I grew up in Virginia and moved to Boston, and there’s something about San Francisco. It allowed me to invent my life in a way that I don’t think I could have done in a traditional place. I believed I was this person and could become it with good fortune and hard work, and it’s that sort of spirit that I want to create in the building, and the people who live there ultimately will give it that character. That’s who we want to attract.

WWD: You talk about your career in your new book.

K.F.: It’s called “Mr. Ken Fulk’s Magical World,” and how I think of it, it does feel like there is magic. I’ve sort of been this same creature since I was six, and it became what I do for a living. It’s not just a designer’s tome; I wrote the whole book, which is exciting, and I’m already working on another.

K.F.: I am one of those rare people who doesn’t have a line between work and play. Yesterday was a day that was selfishly mine with my husband and my four dogs on the beach in Provincetown. If I’m on the sofa with a still-wet dog and I’ve built a fire, I’m never happier. Someone asked me, “When you were a kid, did you think you would have this over-the-top crazy life?” I thought, yes, I completely did.