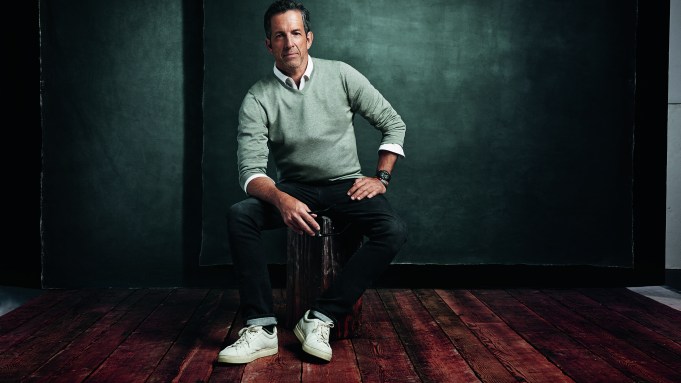 At 35, Kenneth Cole Productions is still a work in progress.

The company, which has built a $1 billion global footwear, apparel and accessories brand at retail while simultaneously raising awareness of social issues, continues to tweak its collections and business model.

“Very early on in this journey, I uniquely found not just an aesthetic, but also a voice,” said Kenneth Cole, chairman and chief creative officer. “I found the ability to communicate with people, which has turned out for me to be a far more meaningful platform. To talk to them about not just what’s on their body, but also on their minds.”

Cole’s strategy is to create context for the clothes and shoes and to elevate their relationship with the customer to make it more meaningful. “And typically to talk about things that survive a given heel height or a hemline,” he said.

For example, in the mid-Eighties, Cole was talking about HIV before anybody else was. “In many ways, it changed the brand, it changed the man and it changed the company,” he said. Cole said it afforded him the privilege to engage himself and the business in these issues that they might not have been able to otherwise.

The company ran an ad about same-sex marriage in the buildup to the 2004 presidential election. At the time, same-sex marriage was the new political hot-button issue. The company won an award from GLAAD for being the first to address gay marriage in an ad, photographed by Richard Avedon. The ad, which showed two men grasping hands, said, “52 percent of Americans think same-sex marriages don’t deserve a good reception. Are you putting us on?…Kenneth Cole.”

Cole still does topical advertising, but he said it’s a very different world today. “I started doing this long before there was social media. Today, everybody has an opinion on everything.” Lately, the brand has focused its communication on voting and registering for the midterm elections. Cole said he spent much of the summer talking about “Pride,” which is something it has been doing for almost 20 years “long before most did and have.”

“I’ve been able to marry my commitment to community and philanthropy also to the business, which is a privilege,” said Cole, who began in business selling out of a 40-foot trailer truck, with the words “Kenneth Cole Productions” painted on the side. In order for him to park on the street across from the New York Hilton, the day of the shoe show, Cole applied for a permit from the mayor’s office to shoot a full-length film titled “The Birth of a Shoe Company.” He sold 40,000 pairs of shoes in two and a half days, and his business was off and running.

For 30 years Cole served on the board of amfAR, and spent 14 years as chairman, raising over $120 million for the charity. Cole stepped down as chairman in February amid controversy over reports that he allegedly made a deal to funnel charity proceeds to Harvey Weinstein’s investors. He continues to work as a UNAIDS ambassador, however. “I’m still involved in other HIV initiatives,” he said.  He is also founding board member of Help U.S.A. and is on the board of Sundance.

To celebrate the company’s 35th anniversary, the brand has re-tailored a capsule of its signature pieces to create a limited-edition collection.

The collection is made up of six heritage leather items, including shoes, accessories and a leather jacket. The capsule includes The Men’s Boot 84, The Women’s Riley Pump 83, The Moto 88, The Backpack 87, The Watch 96, and The Spinner luggage 99. Each piece has been named to include the year it was introduced in the brand’s collection. The collection is lined with the brand’s commemorative “Kennethism” signature print to showcase Cole’s voice over the last 35 years, as well as an embossed patch and story patch. The collection will be available exclusively at Kenneth Cole’s store at Bond and Bowery and online at KennethCole.com, with prices ranging from $149 to $425.

In addition, the company will launch a social and digital campaign titled “35 Years Told” that acknowledges the many, like-minded individuals who have touched the brand in some way. The responses will be featured as content on Cole’s social channels and web site, as well as shared on many of its individual channels. The goal is to salute the causes that these individuals have championed and talk about the impact that has been made. Among those featured are Robert Redford, Cheyenne Jackson, Alan Cumming, Jason Derulo, Diane von Furstenberg, Stanley Tucci, Amy Brenneman,  Jon Bon Jovi, Michael Strahan, Carly Simon and Nancy Pelosi.

Asked whether he feels he’s more well-known for his social activism than his collections, Cole said, “That’s a good question. With some people, maybe that’s the case. There’s a younger audience today that first found the brand in the last few years and are less familiar with the voice. They’ve come to it from the product. There’s many that remember us for the voice.”

Cole said he’s trying to re-energize the company’s domestic platform, while expanding aggressively around the world. The company today has a thriving footwear business, along with men’s and women’s sportswear, men’s suits, watches, accessories, handbags, watches and luggage. To a large degree, he said his customer is the Millennial consumer as well as his peers.

Cole said the footwear business “is as good as it’s been in a long time.” He said he repositioned it when the company went private in 2012 after 18 years of being publicly listed. The company hadn’t been making its numbers and was becoming less relevant. Cole, at the time, wanted to get off the treadmill of quarterly profit updates to Wall Street and the stock-price roller coaster. Becoming private gave him the opportunity to re-strategize the business, evaluate the allocation of resources and think more broadly about goals and objectives. The company closed its nonproductive retail stores and started focusing more on digital and less on brick-and-mortar.

“The world is changing. The design theme we have is ‘Re-tailoring.’ We’re trying to re-tailor the product and at the same time, the business model, so it’s consistent with how technology is infused in everything we do. We talk about everything we do, how we position and we transact,” he said. “There is technology in almost all our products now, which we refer to as Techni-Cole, no pun intended,” he said. The brand’s key footwear styles are now designed with Techni-Cole, featuring innovative performance and comfort technology.

One quarter of the company’s business is footwear, and three-quarters is apparel and accessories. Global Brands Group produces the women’s and men’s sportswear. The women’s sportswear is sold at Bloomingdale’s, Nordstrom and Dillard’s. “It’s still young and is well-positioned and doing well,” said Cole.

Today, men’s footwear accounts for 55 percent of the brand’s sales in the category, while women’s is 45 percent. The shoes are produced in-house.

Cole is actively engaged in social media. “I have found it as a useful outlet, constructive most of the time. It’s the ability to talk about what I feel is relevant and how do I speak to what’s happening at the time in a way that’s consistent. For the most part, I still talk about a handful of the same issues, as everything evolves and the circumstances continue to change, here’s a different way to speak to them in terms that are relevant and appropriate.”

Does he believe that being outspoken as a brand attracts customers or turns them off?

“My guess is both. I’m sure some people haven’t necessarily embraced some of the messages over the years. We’ve been talking about the inappropriateness of automatic weapons and guns since the late Eighties. I know we’ve lost some customers over the years, and in some ways, secured others,” he said.

As for the biggest risk he ever took in business, he said, “There was an inherent risk on going public, especially for a company like mine, where we naturally spoke about things and engaged in things most people wouldn’t. There was maybe an even greater risk in going private. I was intent on improving the business model and knew we couldn’t do it as a public company. It has improved. We needed to get smaller to get bigger. We need to elevate the quality of our product, of our distribution and our production. We knew that we couldn’t do that in a public environment.”

Discussing where the company is going over the next few years, Cole believes e-commerce is critical.  “I see it more global, and we’re hoping to build our online platform. E-commerce continues to do better. I’m hoping to be able to put forth a unique retail model that helps us communicate the brand’s point of difference and heritage that is relevant to the reality of the world today, the new technology and new ways people are consuming products,” he said. Cole believes that running a business today has its challenges and is more difficult than it’s ever been. “I think it’s harder to run a business today, but more rewarding. It’s very competitive today, the consumer is far more demanding. At the same time, if you get it right, the rewards are that much greater,” he said.

On Wednesday, Cole will host an event at the brand’s flagship on Bond and Bowery in New York. The event will salute all the individuals who have touched the brand over the years and highlight certain Courageous Class members. Mari Malek (Courageous Class of spring 2016) will be the DJ and Vic Mensa (Courageous Class of fall 2018) will be performing. Guests will also be able to customize canvas totes with a “Kennethism” An intimate dinner for close family and friends and those who participated in #35YearsBold will follow.