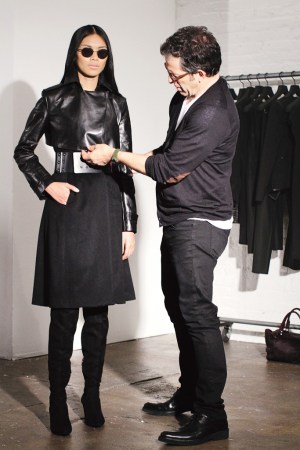 NEW YORK — Kenneth Cole Productions is reshaping itself for its 30th birthday.

Besides moving to take the company private (which sources said could gain approval in a few weeks), KCP is launching a new women’s and men’s sportswear collection, named Kenneth Cole Collection, which has higher price points, better fabrics and more advanced styling. The new line marks a major effort by the company to jump-start its business and will impact everything from its retail stores to its marketing message.

“We’re entering this phase of adulthood. We’re about to become 30 [next year]. This is a transitional period. We’re in the process of elevating and returning to certain roots of the company and elements of its heritage. We’re turning to the next chapter, with a hint and suggestion of a prior one,” said Kenneth Cole, chairman and chief creative officer, in an interview.

The goal is to elevate the quality of design, production and distribution, he said. Changes will evolve throughout the entire company, from “below the ankles and up. We’re reintroducing women’s footwear and handbags as we speak,” he said. Cole discontinued wholesale distribution of women’s footwear and handbags two years ago due to performance issues (they were available in Cole’s own stores and online), and is reintroducing them for fall. “We’re also going to reintroduce ourselves to the Kenneth Cole woman. We’re going to speak to her in a more elevated and engaged manner. What’s on her mind, and also what’s on her body,” said Cole, whose publicly traded company last year lost $2.9 million on $478.9 million in revenues.

This evening the company will introduce Kenneth Cole Collection, as well as show Kenneth Cole New York, at Cedar Lake in New York. The company has created a life-size, living breathing look book, where eight video installations of models will show 24 individual looks, shot by artist and director Sharif Hamza.

The launch of the higher-priced Collection line is the latest step in Cole revamping its apparel offerings. Last spring the company took the women’s Kenneth Cole New York license back from Bernard Chaus Inc. and started developing the product in-house for the fall 2011 season. Kenneth Cole New York is sold to Nordstorm, Lord & Taylor and a few better special specialty stores, as well as its own stores and online. The men’s license, which had been held by Paul Davril Inc., was also brought in-house in 2008. Now, all women’s and men’s apparel is done in-house at KCP.

Going forward, the women’s offering will consist of Kenneth Cole New York and Kenneth Cole Collection, which are two separate lines but can be easily worn together. “Within the same environment, we’re going to offer both alternatives,” said Cole. Kenneth Cole Collection “are key items, key pieces, and hints of special pieces you always wanted to wear,” he explained. “It’s kind of cleaned-up wear to work and after. It’s a lot of heritage elements and textures going back to the beginning, a lot of leather, a lot of black, mixing textures and lots of visible and functional hardware, buckles, studs, exposed zippers. There are richer leathers, fabrics, chiffons, as well as pony leathers.” Highlights include mesh long-sleeve tops, soft flowing dresses, slouchy trousers and sheer lace button-down tops.

For the July kickoff, Kenneth Cole Collection will be housed in its own environment in Kenneth Cole stores, while they work out production and merchandising issues. The company expects to wholesale it to a larger audience by holiday or next spring. Kenneth Cole has 25 regular price stores and 67 stores outside the U.S. Some of the units are licensed, while others are owned. Over the last two years, the company closed 17 underperforming stores, among them the Rockefeller Center flagship opposite Saks Fifth Avenue.

When asked to describe the Kenneth Cole customer these days, Cole responded, “She’s a very confident, sophisticated woman who knows what she likes. She has a clear sense of her own style. She wants a brand that complements her style, but doesn’t define her style.…She is working, has a job and she can afford it.”

Cole said Kenneth Cole Collection will be positioned in the contemporary area. While he didn’t want to name resources it will compete with, he said, “In theory, it’s more urban, the woman is on trend, but is not trendy. She’s very confident who she is. She’s comfortable in the city, but also outside the city. We have a lot of good outerwear pieces.” He said he has always wanted to design a more expensive line. “We’ve taken stabs at it in the past. We’ve decided to do it in a more thoughtful, controlled manner. You’ll see elements of it now. We’ll test it, and then we’ll go from there. In this new world today, you can test better and respond more efficiently and more effectively than you could before,” he said.

The key will be patience and a disciplined approach. The company declined to reveal first-year volume projections for Kenneth Cole Collection.

In addition to its regular distribution, Kenneth Cole Collection will be sold via e-commerce, and Cole will continue its aggressive Facebook and Twitter presence once the line launches. He also said they plan to renovate their freestanding stores. “We’ll be changing the whole retail environment,” he said. Because Cole’s men’s wear business is more developed and mature than its women’s one, Cole feels that he has established more of a dialogue with his male customers, than his women’s customers. “I don’t think we’ve had it [a dialogue] with women. This process will initiate that in a more meaningful way,” he said. The men’s business is almost 50 percent larger than women’s.

Kenneth Cole New York’s men’s line is a small business, mostly done in its own stores, with some business at Nordstrom and Lord & Taylor, he said. “We’re bigger in Reaction in men’s, and Kenneth Cole New York in women’s.” The company has a thriving business in several international markets including Southeast Asia (Thailand, Philippines and Taiwan), the Middle East, Latin America, Canada and soon to be India, where it plans to open 14 stores with a partner over the next two to three years. Cole closed its stores in Hong Kong and Singapore several years ago and is currently in talks to reintroduce the brand in that market, as well as locations in continental Europe. The company sells House of Fraser in London, where Cole designs and sources all the categories, except for men’s tailored clothing, which House of Fraser designs and produces with Cole’s approval.

The firm also just introduced an intimates line with Delta-Galil.

Asked about his goals for the company, Cole said, “The goal is to create cool clothes that people aspire to wear. That’s what I set out to do the day I went into business, but the business got in the way of it. Invariably you have processes and requirements to sustain certain businesses. Today the goal is to get this right despite some of the perceived obstacles.”

Cole also looks forward to getting the word out about his new collection, which will have a major impact on the brand’s marketing going forward. KCP has always been known for its advertising espousing social causes, but now the designer wants to add an element that stresses the brand’s fashion side, too.

“I’m looking forward to focusing the advertising on the product,” he said. “The intention is to step up our communications with the customer and communicate not just a social message but a fashion message.”