Three years after taking his company private, the designer is advancing his business model. 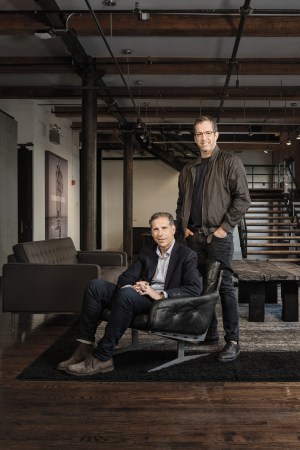 Changes are afoot at Kenneth Cole Productions for fall.

The 32-year-old access­ories and apparel firm, which after an 18-year run as a public company went private in 2012, is starting to make some noise again.

Cole has redesigned its logo and Web site, will launch a multimedia ad campaign called “Courageous Class,” has elevated its women’s and men’s sportswear and accessories offerings for fall and will open a new prototype store on Bond and Bowery on the Lower East Side of Manhattan on Sept. 15, which incorporates both omnichannel strategies and social initiatives benefiting the neighborhood.

In a recent interview at the company’s headquarters, founder, executive chairman and chief creative officer Kenneth Cole and chief executive officer Marc Schneider described what prompted the rebranding of the business, which generates $1 billion in retail sales worldwide across all licenses and product categories.

Cole said he had an epiphany a few years ago and decided that “in an effort to revitalize and re-energize and make the company relevant again, that we needed to make some significant changes.” It became apparent, he added, that all the things the brand needed to be doing, it couldn’t do as a public company.

“You can’t do it in a public arena and can’t do it with the spotlight of disclosure and scrutiny. [We] needed to become a non-public company,” said Cole, as major strategic changes such as store closings and the elimination of certain categories might not sit too well with Wall Street.

Cole thus set out to make the retail experience more relatable to a new generation of customers. It also enhanced the user experience on its Web site, and created a fall ad campaign that speaks to social issues for which Cole is well known — but this time puts the spotlight on the product.

“What we found [from research] was that the consumer is not aware of what we made. The whole rebranding started with simplifying the brand and focusing on the product,” said Schneider, who was previously group president of Heritage Brands at PVH Corp., and before that senior vice president and an officer of Timberland.

In recent years, the company closed a slew of underperforming freestanding stores and decided last year to cease wholesaling its women’s sportswear collection in department and specialty stores, effective this past spring. Women’s apparel is now only available in the company’s freestanding stores in the U.S. and internationally, while men’s wear is carried in stores such as Macy’s, Dillard’s, Lord & Taylor, Nordstrom, Bon-Ton and Belk. Men’s and women’s footwear is sold in retailers that include Bloomingdale’s, Macy’s, Lord & Taylor and Nordstrom.

Cole has five freestanding stores in the U.S. — down from about 50 at its peak — and 65 outlet stores. Overseas there are 100 freestanding stores, which are operated under license. The full-price stores that remain in the U.S. are in New York’s Grand Central Terminal (which does very well, said Cole, but whose future is questionable due to a major construction project around the station); SoHo; Pentagon City, Va.; Beverly Center in Los Angeles, and Houston Galleria.

At Cole’s own retail stores, 65 percent of full-price sales are generated by men’s wear and 35 percent by women’s wear; at the outlets, the ratio is 50/50. At wholesale, Cole’s footwear is four to five times the size of the apparel business, but in its own freestanding stores, apparel sales are equal to footwear/accessories, Schneider said.

The new 2,500-square-foot store set to open on Bond and Bowery will feature men’s and women’s sportswear and accessories. “It’s going to be a very curated shop,” Schneider said. “Some of the older stores were 5,000 to 6,000 square feet.”

Physically, customers will have access to select products, added Cole, but virtually they’ll have access to all the brand’s products. There will be a touch table, iPads for product storytelling, a MemoryMirror, social engagement and free Wi-Fi. The store will also host shoe drives and other initiatives throughout the year, as well as art exhibits from local artists in the neighborhood.

Also new is the company’s re-engineered Web site. It was designed by Cole’s in-house team and is powered by Demandware. Features include the ability to pre-order, sort by color and size and show what’s trending. “You can get updates on what people are looking at while you’re shopping,” Schneider said.

The company updated its logo as well. Designed by Redscout, it features Kenneth Cole in clean block letters. “It connotes functionality and industrial from a design standpoint,” said the ceo.

Since Schneider’s arrival in February, Cole said he has been able to “focus on creative pursuits, working more closely with the design team.” Product-wise, the company has elevated quality across categories and introduced Black Label, a new capsule collection of investment pieces using high-quality fabrics. It is sold online and in top retail accounts, generating 7 to 10 percent of the business.

The new ad campaign — backed by a budget that is 25 percent higher than a year ago, according to Schneider — launches Friday in national print, outdoor, digital and social media platforms. Shot by Glen Luchford and styled by Melanie Ward, the ads feature people who have overcome challenges and pursued their dreams. They include transgender model Andreja Pejic, humanitarian hip-hop artist Rhymefest, pro-surfer-turned-activist Jon Rose, model-turned-activist Topaz Page-Green, and deaf pro soccer player Jamie Clarke. All wear Cole’s clothes and accessories, which are the focus, while their “story” is told in a simple, effective sentence near the slogan “Look Good, For Good.”

While Cole’s advertising has always had a social conscience, asked whether people know what the brand stands for in terms of women’s fashion the designer said, “That’s a good question. That’s been part of our struggles over the years. This campaign does it better than we ever have before.”