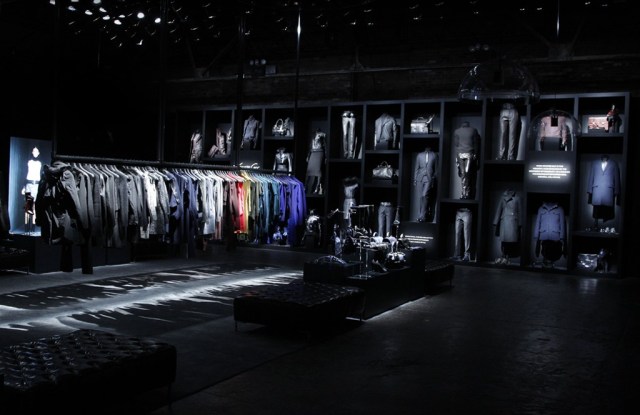 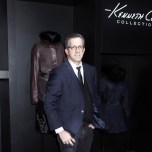 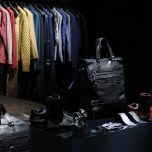 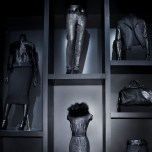 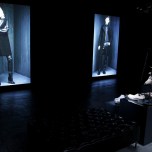 This story first appeared in the March 29, 2012 issue of WWD. Subscribe Today.

As guests entered the long, black rectangular space, they stepped into a life-size, digital look book featuring the new collection. Walls were flanked with eight video installations of models showing off 24 different looks, shot by artist and director Sharif Hamza. Motion-activated screens and individual sound beams were used to encourage a one-on-one experience with the looks. As people approached the individual screen, the models came to life giving them the feeling of joining a conversation in progress. “The world is a collection of voices,” said one model. “Some are imitated. Some are repeated. Few are original.…Wear your voice. Join the movement. Be part of the collection.” Other models gave different messages along the same theme.

Kenneth Cole, chairman and chief creative officer, told WWD that he wanted to not only showcase the fashion, “but communicate inspiring and social messages.” He said the videos were meant to convey “individual forms of expression, and how you present yourself.”

Paul Blum, chief executive officer of KCP, noted that the videos, which were created in-house, will have multiple uses and will be featured in the retail stores and on the Web site. He said that Kenneth Cole Collection will be initially distributed to Cole’s freestanding stores, before being wholesaled to department and specialty stores. “We don’t want to overdistribute it. We want to do this right and do it beautifully,” said Blum.

“Our customer has wanted this kind of [elevated] product,” added Ingo Wilts, senior vice president, creative director of KCP. “Whenever we have had it, it sold very well. I’m quite convinced this product will be very successful. It’s in the DNA of Kenneth Cole.”