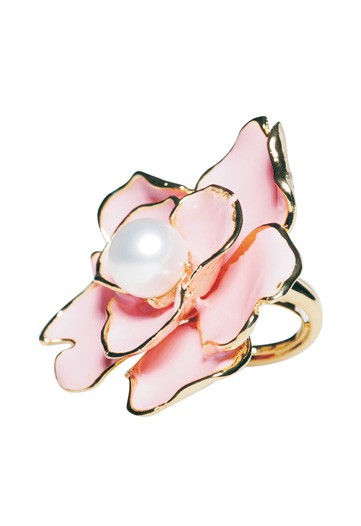 NEW YORK — Kenneth Jay Lane’s new store at The Plaza has been open since October, but the designer is finally ready to celebrate.

On Thursday, Lane will fete the 240-square-foot shop located in the new underground retail section of the landmark hotel. Those expected to attend include Henry and Nancy Kissinger, Oscar de la Renta and H.R.H. Countess Arco.

“We wanted to wait until the store was up and running, until we got some decent signage and people could find the store,” the 76-year-old Lane said. “Now it’s starting to do nicely. It’s a great atmosphere, but it definitely took some time for shoppers to be aware of this area.”

Lane’s last fully owned store opened in 1982 in Trump Tower on upper Fifth Avenue. It lasted 10 years. During that time, Lane also signed on with the now-defunct franchise firm Ciro, which opened and subsequently closed five Kenneth Jay Lane stores throughout New York, California and Charleston, S.C. Lane said he had a hard time committing to owning his own retail shops, but enjoys wholesaling at major department and specialty stores, such as Bergdorf Goodman, Henri Bendel, Bloomingdale’s, Macy’s and Lord & Taylor.

“Running a store is not easy. In fact, running one store can be the same aggravation as running a dozen stores,” Lane said. “It’s nice to have a showcase for your pieces, but I sell to such big stores that I have multiple showcases. I have New York City covered.”

Lane’s new store is a franchised partnership with Daniel Johnson, who designed the shop. It features current and signature Kenneth Jay Lane jewelry and iconic items. Pieces retail from $50 for a wooden bangle to $750 for a Swarovski-encrusted necklace or belt.

Also on hand are Lane’s licensed goods such as handbags, belts, hair accessories and eyewear, as well as “Faking It,” a book on costume jewelry written by Lane, which he will be signing at the event.