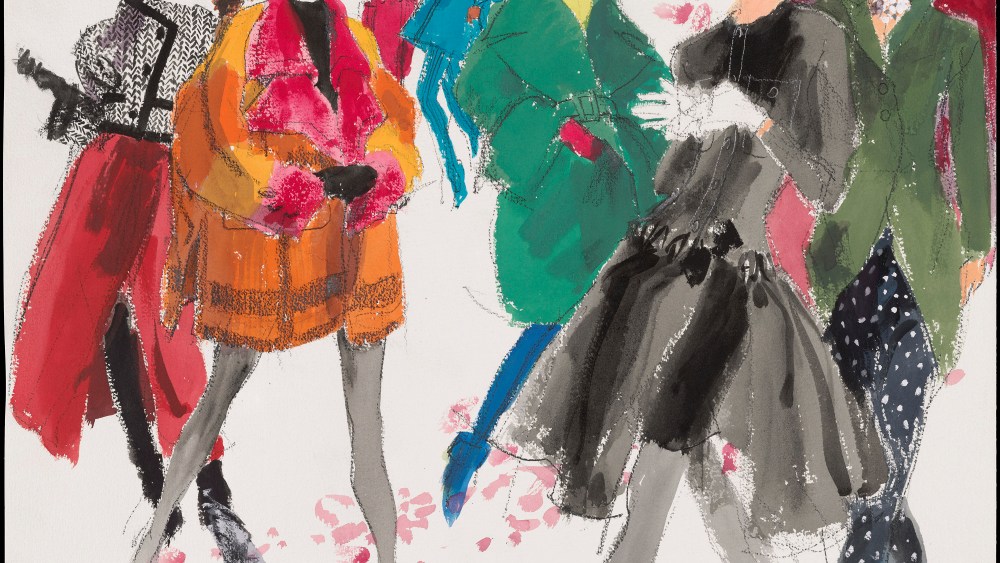 BOSTON — Some two dozen of Kenneth Paul Block’s works are on view at the Museum of Fine Arts Boston in a new exhibit of his sketches.

Block, considered one of the most important fashion illustrators of the 20th century, had a four-decade career at Fairchild Publications. From the Fifties to 1992, he was WWD’s prime cataloguer of fashion and fashionable women, recording the way runways reflected changing times and women’s growing equality.

The MFA owns some 3,000 pieces of Block’s work, the majority of his archive.

It’s the evidence of craft — the whiteout, the penciled notes to production, the charcoal smudges (some deliberate finger-drags to soften a line, some accidental prints) — as Block chronicled styles coming off runways that makes the show striking. There’s the sense of news urgency, haste. A sketch or two looks as if made with a marker about to bleed dry. Working in the pre-digital era, Block would reel off dozens of mini-sketches before coalescing his ideas and drawing the pieces that hit the paper. He became so in tune with fashion that he could, on the occasions a designer banned WWD from a show, re-create it based on descriptions from attendees, like a police sketch artist.

For instance, his sketches of Jackie Kennedy, published four days after JFK was elected to the White House, show her wearing Madame Grès evening gowns, not the American designers she’d soon adopt.

Block was “an amazing draftsperson and he was able to capture the era, not just in the clothes, but also in the way women carried themselves,” says Pamela Parmal, the MFA’s David and Roberta Logie curator of textile and fashion arts.

Block once remarked, “Gesture to me is everything in fashion. It is the way we stand, sit, walk and lie. It is the bone.”

The show starts with a few prim early drawings and their quaint captions — one optimistically describes rompers as “guaranteed to turn most anyone into an odalisque.” But the heart of the show is work Block did throughout the Sixties into the early Seventies, when he worked on gray paper in black marker, charcoal crayon and flat white paint. The monochrome not only suited the era’s printing technology, it also highlighted the era’s sleek fashions shown by Courrèges and others.

The show includes a superb 1964 charcoal portrait of Babe Paley, a fur stole draped over her shoulders, cigarette held low, with thick white paint highlighting the icy planes of her face.

Block’s sure hand captured the profile of the Duchess of Windsor in 1962 with her distinct nose and iron chin. No whiteout or falter here. In 1966, with a quick flip of marker and a slap of white paint, he captured Julie Christie’s sex kitten appeal.

He recorded the liberating impact of workwear — a woman in a 1970 sketch wears a plaid suit and is seated in a masculine pose, with her knees wide and a leg outstretched.

When WWD began printing in color, Block added watercolor. Angled blocks of cranberry, ivy green and pumpkin give background and movement to his sketches throughout the decade.

He also drew covers for W magazine, then also owned by Fairchild. The show features a 1991 W cover featuring a model with glossy scarlet lips, a cloud of black hair, round blue specs, and a Gianfranco Ferré coat that looks awhirl with energy.

The show includes several alternate sketches for the cover of WWD publisher John B. Fairchild’s book, “The Fashionable Savages,” as well as the design Fairchild ultimately selected.

For her part, Parmal thinks Block is under-recognized, and she’s planning bigger showings of his work in future. “I think he deserves a lot more exposure. He was not good at publicizing his own career.”

The MFA has some of the runway fashions Block depicted, and is working to acquire more, Parmal said.

The show runs through Aug. 16.