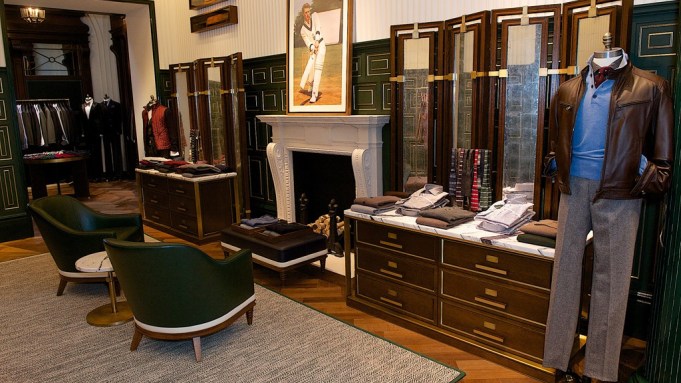 LONDON — The new Kent & Curwen store on Savile Row, the first since the brand was licensed to British Heritage Brands for the Western Hemisphere last year, is a paean to traditional men’s wear motifs. The brand’s providence in cricket and genteel English sporting pursuits are all sung in tasteful, subtle tones, as befits a heritage brand setting up shop at the epicenter of British men’s wear.

Craig Reynolds, president of BHB and Kent & Curwen, enlisted the late celebrity interior decorator David Collins to work on the shop, which pays tribute to architectural signatures from the Edwardian period of the original building, as well as to those of the Jazz Age, in which the brand was born. “It was probably his last big job,” said Reynolds. “What David and I discussed was to respect the Edwardian architecture of the building and embrace Edwardian details, like the floor and the paneling, while bringing elements of Art Deco through the fixtures.”

The entry is paved with black-and-white checkerboard marble squares, while a traditional herringbone weave is referenced in wooden parquetry elsewhere. Throughout the store, which is set over one level and 1,600 square feet, the brand’s signature field green is seen in leather panels that line the walls and are edged with white stitching that calls to mind the stitches on a cricket ball. Other nods to the sport can be seen in a pair of antique bats propped in a corner, in a large framed photograph above the fireplace and in the green-and-white chairs that face it, giving the shop the feel of a traditional gentlemen’s club.

As it happens, Kent & Curwen was founded in London in 1926 by Eric Kent and Dorothy Curwen, who met on Savile Row. It began life as a manufacturer of the finest-quality regimental club and college ties, supplying Oxford and Cambridge universities at a time when neckwear became less conservative. The brand sold to Harrods, much of Jermyn Street and Savile Row, including Gieves & Hawkes, which is now a neighbor.

In the window is a 1937 team photograph of the Hollywood Cricket Club taken during the golden age of Hollywood, when British stars including Cary Grant, Errol Flynn and Laurence Olivier would meet in the Hollywood Hills for a Saturday afternoon cricket match, dressed in traditional cricket whites. Kent & Curwen sponsored the team. It also sponsored the Palm Springs Racket Club, and became the official outfitter for Wimbledon and the Oxford and Cambridge rowing teams.

There are also nods to the brand’s sporting heritage in the collection, which was designed by Michael Sondag before his resignation. Reynolds said those references were deliberately subtle because “we want to celebrate our cricket heritage without being so literal that it feels costumey.”

There are varsity blazers, striped shirts and ties, hunting jackets, chinos, cashmere cricket sweaters and polo tops, suits, a leather biker jacket, a shearling overcoat, tweed blazers and a lot of elbow patches. Prices range from about $200 for a shirt to about $1,000 for a jacket or blazer. T-shirts, neckwear and polos are priced lower. As yet, accessories are not available, but bags and belts are in the pipeline.

The brand is owned by Trinity Ltd., a Hong Kong-based retailer of luxury men’s wear brands. Trinity signed a license with British Heritage Brands LLC, a venture between LF USA and Star Branding LLC, a company owned by Reynolds along with Tommy Hilfiger, Andy Hilfiger and a couple of other associates, for the U.S. and Europe. Reynolds said the deal came about when Trinity approached Hilfiger with the idea and Hilfiger agreed on the grounds that he would be interested only if he could build the senior team and do things “his way.” Reynolds oversees design alongside Simon Spurr, who was named to replace Sondag in September and whose first collection will be for fall 2014.

The brand is being sold through Harrods in the U.K., while Nordstrom and Bloomingdale’s are the retail partners in the U.S. Reynolds said he is “open” to opening more stores, but for the moment is “committed to growing the business where it initiated, perhaps in London or other large cities in the U.K., as well as increasing our wholesale base.”

The store, at No. 2 Savile Row, will be celebrated with an official launch party next week.