The singer has landed the job of guest creative designer for the sportswear brand. 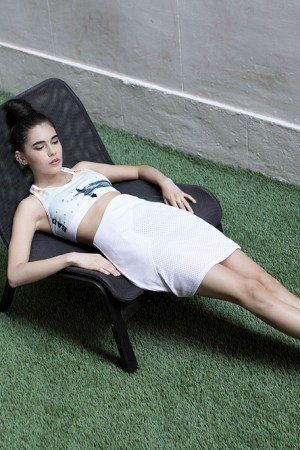 Kiesza is moving beyond her musical career. The Canadian singer-songwriter and Fendi collaborator has landed the job of guest creative designer for Bad Bunch NYC.

Her 51-piece freshman effort, which is to add a feminine direction to the otherwise masculine brand, is slated to hit stores on Aug. 6.

“Initially, we planned to have a seven-piece collection. However, as our creative meetings progressed, it would’ve been a disservice to relegate [Kiesza’s] ideas to only seven pieces. Thus, we appointed her as the guest creative director for our entire pre-fall season,” Bad Bunch NYC’s founder René Louison told WWD.

It’s a first for the prints-focused sportswear label, which is sold through a network of international stockists, mostly Japanese, including Walkin’ Store and Global Styling Corp., as well as on its own Web site.

The singer, whose résumé lists collaborations with Rihanna, Duran Duran and Diplo, and who has made a big splash with her own number-one single “Hideaway,” said she stumbled upon Louison through a mutual friend who is also a songwriter.

“We really bonded instantly and soon realized [we] had a mutual passion for art. After showing Andrea some of the art I create [in] my spare time, within only a few days he approached me to come on board,” said the Calgary native. “Initially it was intended as a one-time project, but we are already discussing future concepts for fashion.”

Comprising tank tops, shorts, sports bras, leggings, drop-crotch pants, skirts and dresses, along with a range of light unisex outerwear pieces, the slightly retro-inspired line, called “Select Surrealism,” will feature prints developed by the singer. The collection will retail between $80 and $400.

“[It] is meant to be ambiguous. Originally, Bad Bunch NYC was created as a men’s line, but being a woman, I wanted to help expand the company to carry women’s pieces. Our ultimate vision, however, was to make a line that anyone would wear and feel unique in,” she explained, having chosen the fabrics and patterns as well as cuts of the new styles.

Inspired by Surrealist art, Kiesza combined painting, photography and graphic art to produce prints, which range from “whales dwelling in the skies” to “sharks basking on the horizon,” while also experimenting with textures, lighting and coloring — a fusion strangely in tune with her own Nineties-acid-washed-denim-meets-Forties-pin-up-curls aesthetic.

“It was a really fun and challenging process. We wanted the items to be simple, minimalistic and cool, while still maintaining that abstract quality I was going for. My goal was to create clothing that would stand out just enough to be noticed, while being simple enough that lots of people, from different demographics, would wear them,” she explained.

A short film art directed by the singer is to accompany the pre-fall line.

Kiesza — whose real name is Kiesa Rae Ellestad — is gearing up to launch her own fashion venture called SteamPop. “[It’s] still in its cocoon, but I have already starting designing for it,” she explained. “Being so new to the production side of fashion, I wanted to collaborate on a project as a designer to educate myself, before I designed my own pieces. Working with Bad Bunch was the perfect opportunity to learn the whole process behind the scenes.”

That said, the 26-year-old performer has no desire to cut her flourishing musical career short. “Music is a never-ending journey that continues to surprise even me,” she said. “It is the ultimate catalyst of my creativity and sits at the heart of everything I do. I am going to be working on my new album soon, though there is no deadline in place for a release yet. Also, I will work on expanding my music into film and will find the time to write with and for other artists as well,” Kiesza allowed.