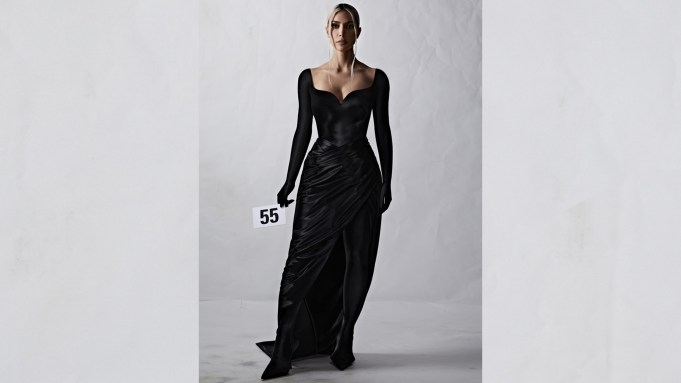 Encasing Kim Kardashian in couture was a winning move for Balenciaga.

The reality TV star scored the Instagram post with the most bang for its buck during the recent Paris Couture Week: It showed her striding out of the Hôtel de la Marine in Paris wearing a sparkly Balenciaga couture gown and a black face shield that prompted comparisons to the xenomorphs in the 1979 sci-fi horror flick “Alien.”

According to initial data from Launchmetrics released Wednesday, the post on Kardashian’s personal account generated $935,000 in Media Impact Value, a monetary value calculated from every post, interaction or article about a brand.

Kardashian’s winning post has garnered almost 2.5 million likes and 10,000 comments to date. Instagram viewers can click through to watch a clip of her on the runway in a different dress and without the face cover, blonde tendrils framing her face.

“What an honor to walk in a couture show!” Kardashian wrote, thanking Balenciaga and its creative director Demna “for this amazing experience!”

Balenciaga also topped the brand ranking for the week, with Chanel, Dior, Jean Paul Gaultier and Schiaparelli rounding out the top five. Jean Paul Gaultier benefited from attention brought by Olivier Rousteing, its guest designer for the fall 2022 couture season, while Schiaparelli received additional attention for its retrospective exhibition at the Musée des Arts Décoratifs that bowed alongside its runway display.

When brands are ranked according to their own channels, Chanel jumped to the top spot, with Balenciaga in second and Dior, Fendi and Zuhair Murad following after.

Kardashian also came up number one in the Launchmetrics ranking of celebrities and influencers during Paris Couture Week, which ran from July 4 to 7, generating about $2 million in MIV.

Meanwhile, data for Men’s Fashion Weeks in Milan and Paris, which took place from June 17 to 26, suggested IRL shows were a bonanza for participants. The MIV almost doubled to $140 million, versus $74 million for the shows last January.

Launchmetrics noted that Milan attracted significant Korean and Thai audiences while Paris got lots of attention from Japan, largely secured thanks to VIPs from the Asia-Pacific region.

Prada, for example, generated $26 million in MIV thanks to the presence of Thai actor, singer and model Win Metawin and K-pop star Jaehyun of NCT. Fendi came in second and Versace third in the Italian capital.

Luxury giant LVMH swept the top-three most-viewed brands in Paris, with Louis Vuitton first, Dior second and Givenchy third. The latter brand got buzz because it was the first stand-alone men’s show by its creative director Matthew Williams, who laid out a pool of milky fluid for models to splash through.

Vuitton attracted eyeballs by having Japanese singer Nissy in the audience, while Dior benefited from the attendance of Korean rapper Oh Se-Hun and Japanese actor Ryusei Yokohama.